So the Nanos poll arrived yesterday on the virtual doorstep with a dull, deadening thud of a wet, weekend newspaper on the front porch. Rob Ford now has an eye-popping lead of nearly 25% over his closest opponent. Surprising? Unquestionably. But the source of the surprise goes deeper and wider than just the fact that Ford is even being touted as a viable mayoral candidate.

The poll is startling because I thought in the last couple weeks there’d been a shift in tone to the debate from an avalanche of negativity about the state of the city to one more reasoned and composed. Take, for example, Alan Broadbent’s letter on the Maytree Foundation website. While all we’ve been hearing over the course of the spring and summer from most of the candidates running for mayor how bad a shape the city is in – i.e. rampant fiscal irresponsibility, a non-responsiveness to citizens’ needs, the phantasmagorical “War on Cars” – that characterization may be, well, a little over the top. “Toronto nowadays is a progressive and welcoming city with a thriving economy, flourishing arts scene and renowned cuisine.

Its education and healthcare provision are among the best in the world.” So says the The Telegraph U.K. But, they’re probably just a bunch of Chelsea elites.

So, what’s with this disconnect and the Fordian anti-everything appeal?

I lay a large portion of the blame on the campaigns of George Smitherman and Rocco Rossi. Despite the fact that our current mayor stated his intention not to seek another term last September, both men decided to run in opposition to him. Rather than talking about how they’d build on the successes of the Miller administration and fix the things it messed up, they chose to portray Toronto on a steep, Skeleton speed decline toward 3rd world status. They (with mainstream media assistance) created the anti-City Hall environment that is Rob Ford’s milieu and his only strength as a candidate.

To use Bill Maher’s reference to the Tea Party’s ascension within the Republican Party, Teams Rossi and Smitherman let the Frankenstein out of the castle and lost any control over it.

Deputy Mayor Joe Pantalone should also shoulder some of the blame for not vigorously defending the administration that he was an integral part of. Only belatedly has he embraced the sentiments about Toronto expressed by The Telegraph and tried to force back the apocalyptic visions stirred up by his opponents. Too often he was sheepish in defending the accomplishments achieved at City Hall over the course of the past 7 years. An odd tactic to take since some polls released over the past month or so suggest that David Miller would be the front runner in this race if he was in it. Clearly, a sizeable chunk of people who live here believe that we haven’t been on the wrong track.

People like us here at All Fired Up in the Big Smoke also need to accept responsibility for the Ford phenomenon. We clearly misunderestimated the man’s appeal and spent much time focusing on his appearance and personal foibles although, in terms of the latter, there is much overlap between the man’s shortcomings and his politics. Clearly, we should’ve concentrated our efforts purely on his ideas, policies and what a Ford mayoralty would look like if he actually won. (Like Eye Weekly’s Edward Keenan did last week.)

I guess the idea of Rob Ford actually winning on October 25th seemed so impossible to contemplate that it hardly seemed worth the effort of criticizing him as if such a thing could ever happen.

There’s still five weeks to go until the election. Federal and provincial don’t officially start until around now. With such a commanding lead, the scrutiny on Rob Ford will only increase in its intensity no matter how much his handlers try to keep him in a bubble and not allow him to make any serious blunders. But the Nanos’ numbers do suggest a huge hole that those chasing him have to try and dig themselves out of. As John McGrath pointed out this morning on Twitter, a candidate hoping to overtake Ford not only needs to build their own numbers but they have to cut into Ford’s support.

How they do that, I’m ashamed to admit that I have no idea. The Rob Ford Army is entrenched and their belief in his candidacy as the cure for all that they see ails Toronto is firm and not subject to much dissuasion. 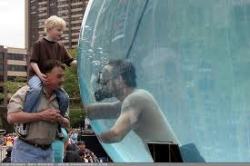 Point out that their man’s transit plan is completely impractical, will not alleviate congestion and has almost zero chance of ever, ever being implemented and their response is ‘Stop the War on Cars’! Or that his electoral reform idea of cutting council by half would represent the complete antithesis of increasing accountability and responsiveness, and they’ll demand ‘Respect For the Taxpayer’! All that ‘corruption’ he claims happens behind closed doors at City Hall like the Tuggs deal? Had he been doing his job as a member of the auditing committee, he could’ve sent the deal to be audited by casting the deciding vote but was in absentia at that particular meeting. No matter because when he’s mayor, Rob Ford will ‘Stop the Gravy Train’!

It seems once Rob Ford supporters cross that divide, there’s no getting them back. Failure to do so means he will be Toronto’s next mayor and no one else is to blame except ourselves. Those 54% of us who cannot even begin to fathom the prospect of His Worship Rob Ford.

Tired and blue about the mayoral race, and its paucity of thoughtful, critical ideas sacrificed at the altar of nonsensical ranting and empty rhetoric posturing?

May we suggest taking a breather at an event sponsored by the Cities Centre research institute at the University of Toronto or the Canadian Urban Institute? After successfully managing to pry the $40 registration fee from Mr. Boss Man at All Fired Up in the Big Smoke as a genuine business expense, I attended last Thursday morning’s Breakfast Roundtable entitled, On the Outside Looking In? The Many Mysteries of Governance in the City of Toronto at the august Arts and Letters Club. Ah, the sweet sounds of apolitical, rational discourse!

That is, after the bland stylings from the morning’s moderation of one Art Eggleton, Toronto’s longest serving and quite possibly most unexceptional mayor. (Is there a link between those two details, we wonder.) I wasn’t entirely certain what the event’s organizers thought

Mr. Eggleton would bring to the proceedings aside from a world of knowledge about how to keep reform at bay which seemed to be the antithesis of what they were hoping to accomplish but fortunately, like most discussions he contributes to, much of his opening remarks were quickly forgotten.

The meat of the presentation concerned itself with the nature of governance at the municipal level here in Toronto. In 3 short talks delivered by professors Richard Stren and Frank Cunningham along with the chairman of the Maytree Foundation and author of the book Urban Nation, Alan Broadbent, the main thrust was that the city’s governing structure was big, messy, multifaceted and still very much a work in progress. “A complex behemoth,” as Prof. Stren called it.

Without going into the details (but certainly encouraging people to take a moment to read a basic summary of what was under discussion here, suffice it to say there are no easy solutions to the difficulties Toronto faces and anyone on the campaign trail telling you otherwise is either lying or completely misinformed and should be summarily ignored as a viable candidate.

None more than those promising to cut council members by half. The last thing a city of this size and multifaceted nature needs is less political representation. A councillor’s job is so vastly different than that of what MPs and MPPs do that equating the three levels of government reveals nothing more than an absolute ignorance of how things work at the municipal level that is so staggeringly monumental that it should automatically disqualify those espousing the idea.

At the discussion on Thursday, there was no panic about the state of the city. No dire predictions of its immediate collapse into Mad Max style chaos that we hear much of from our mayoral candidates. Just reasonable talk about the problems we face and possible solutions to pursued. Maybe if there were more of that during this campaign and less unsubstantiated, purely politically motivated vitriol, the public might be more positively engaged with their local politics, and looking forward to electing a new mayor instead getting ready to hold their collective noses and vote for the least worst candidate. 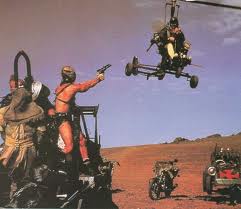 No great city gets built in that manner.