L.A. is a great big freeway
Put a hundred down and buy a car

The freeways move you. Except when they don’t. 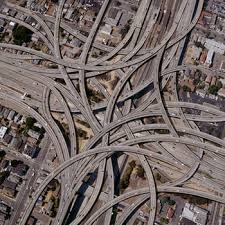 They are theoretical works of genius, “existential limbo where man sets out each day in search of western-style individualism,” according to Brock Yates author, Smokey and the Bandit II and Cannonball Run scriptwriter, editor of Car and Driver magazine, but a failure in practice to efficiently and equitably move the number of people who want to use and depend on using them.

I got reacquainted with the L.A. system a couple days ago, taking the San Diego Freeway – the Fightin’ 405! – from the westside to San Pedro, the Port of Los Angeles, and back again. For the most part, it worked, for me, driving it on off-hours, such as they are here. Twenty-eight miles (45 kilometres), quickly and hassle-free, no delays except for that one with the wrong turn-off, up and over the Vincent Thomas Bridge to the ominously named Terminal Island. It wasn’t. I was able to make it back to my original destination.

The return trip home was a little less smooth, not disastrously so or even that soul-crushing although, any sort of auto-induced traffic snarl kills me just a little on the inside.

I wasn’t pressed for time, so the wait wasn’t critical. It’s just, you know, fuck. Sitting in your car, am I right?

It was just past midday, 1 o’clock or so, on a Wednesday. Nothing more than volume, would be my guess, to explain the standstill. Bunching up at freeway interchanges. The 110-405 first and then the 405-10. That 35 minute (without traffic) Google map predicted return home now closer to double that.

The promised ease of mobility implicit with car use comes with tons of concrete and unadvertised strings attached, asterisks and caveats. Los Angeles freeways are huge monstrosities of engineered construction. They take up a lot of prime real estate in order to provide the space necessary for drivers to access the convenience and car commercial abandon.

“… the freeway system in its totality is now a single comprehensible place, a coherent state of mind, a complete way of life,” Reyner Banham writes in his 1971 book Los Angeles: The Architecture of Four Ecologies. “The freeway is where the Angelenos live a large part of their lives.”

Behind the wheel of a car, stuck in traffic. This expression of personal freedom exacted by heavy collective costs, it turns out. 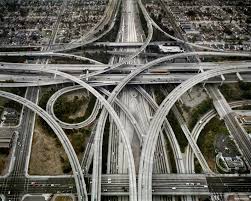 If too many of us are determined to pursue our individualism and freedom this way, very few of us actually achieve it. There isn’t room, at least not in cities, even cities like Los Angeles that operated under the assumption that space was unlimited. “I was amazed at the size of the city…,” Christopher Isherwood said of Los Angeles back in 1939 (h/t David Ulin’s Sidewalking). “There seemed no reason why it should ever stop.” Sprawl to a crawl was the inevitable outcome of such an impression.

“The private car and the public freeway together provide an ideal – not to say idealized – version of democratic urban transportation,” Reyner Banham wrote, “door-to-door movement on demand at high average speeds over a very large area.”

While he offered qualifiers to that statement, to the limits of who enjoyed such freedom, to the very nature of that freedom, Banham was a big fan of what he called “Autopia”, one of the ecologies in his book.

It was certainly preferable to the mess of public transit he experienced in London, Paris and New York at the time. There were drawbacks to auto-dependence, for sure, but in the end, “the freeway is not a limbo of existential angst,” Banham concluded [italics his], “but the place where they [Los Angeles drivers] spend the two calmest and most rewarding hours of their daily lives.”

Such an effusive statement about driving seems laughable, even factoring in the time frame it was written in. It sounds more like advertising copy than the actual insightful and provocative urban thinking the rest of Banham’s book actually presents. It’s little wonder this section is the briefest of his 4 ecologies. It’s almost as if Banham couldn’t take himself seriously on the subject.

Even if the driving in his “Autopia” was as blissful and awesome as Banham claimed, it certainly isn’t any longer, more than 40 years on. It’s become more of a chore, a slog, a grind. Autopia’s been rear-ended by Carmegeddon. Here’s what we know now that previous generations either didn’t or chose to ignore:

there’s no building ourselves out of the mess, no matter how much we keep trying. More roads won’t fix it. Self-driving cars will only make the prospect of driving more attractive which, when all is said and done, will encourage more people into cars. Where are they all going to go? Driving begets driving.

Chasing freedom and self-identity in the same fashion as everyone else doesn’t lead to much of either, regardless of the make or colour of your car.

L.A. is a great big freeway
Put a hundred down and buy a car
In a week, maybe two, they’ll make you a star
Weeks turn into years
How quick they pass
And all the stars that never were
Are parking cars and pumping gas

This entry was posted on Friday, February 12th, 2016 at 1:11 pm and is filed under City Building, Killer Cars, On The Road, To Live And Drive in L.A., To Live And Write in L.A.. You can follow any responses to this entry through the RSS 2.0 feed. You can leave a response, or trackback from your own site.