The time has come for me to talk about the weather. It’s purely coincidence – honest – that you may be enduring/have just endured something of a cold snap, depending upon your location reading this.

Up until this period of the winter, a good majority of us having been experiencing warmer than usual temperatures. That remains the case here if not where you are.

I’ve been in Los Angeles for just over 3 weeks now. It was somewhat overcast on the day I arrived and there was one stormy Sunday a couple Sundays back. Until about a week ago or so, temperatures were spring-like to these old bones. The, I’m not sure of the exact terminology, semi-arid, desert-like conditions in which this place sits makes for chilly nights. Again, think one of those beautiful April days when the sun goes down. Jacket? Sweater?

Even when you do notice the drop in temperature, when there’s a certain nip in the gust of wind that’s caught you by surprise, you can pretty much assume that’s the worst it’s going to get. There’s no portent of worse things to come, weather-wise. Winter isn’t on its way because winter’s already here.

Lately, however, it has been hot. High summer hot. Uncomfortable for some but I have nothing but contempt for people like that.

Yes, there’s the matter of climate change at the heart of these unseasonably warm temperatures. Brought on by this year’s muscled up El Niño? For the sake of this particular post, let’s just assume it to be nothing more than a climactic anomaly, occurring right after the hottest year ever on record, globally speaking. I mean, my neighbour’s still watering his lawn despite the severe drought conditions. We too can whistle past the graveyard for a few hundred words, can’t we?

How does one mentally adjust to constant good weather? Agreeable, let’s refer to it instead, in order to not put a qualitative measure on it.  Although, I guess, ‘agreeable’ does denote a certain positive connotation.

How does one mentally adjust to living in a place where flowers are always in bloom? Constant vivid colours despite the sun’s attempt to blanch everything a milky white.

Judging from my very limited perspective so far, it’s pretty much business as usual.

Of course you can go to places where the summertime temperatures bring out summertime activities. There is a great big ocean on your left if you’re facing north. The beach doesn’t go unnoticed in this kind of beach weather.

But the streets don’t spring to life when the temperatures go up. At least, not the streets I’ve been making my way around. I’m staying in what to my eyes should be an immensely walkable area of Los Angeles. Pretty much everything you need to get along within easy walking distance. And pretty pleasant walking too if you can ignore the cars, which I’m learning to try to do whenever I’m not fearfully looking over my shoulder with the expectation of being run down, bullying their way through the neighbourhood. Where I come from, these streets should be hopping, full of pedestrians, full of people, in this kind of weather.

It’s almost like the weather, unusual as I’m told it is for this time of year, is taken for granted. You think this is hot? You should stick around until September. That’s real summer weather in Los Angeles.

A common refrain I’ve heard in reaction against the constant sun and life affirming temperatures is how people would miss the seasons, the changing of them.

The fall colours, the spring renewal, the winter… hunkering down and getting through it. You can dress for the cold. You have to hide from the heat.

Variety. You appreciate things more when they’re fleeting. You can only have a favourite season when there are others to unfavourably compare it to. You don’t know what you’ve got ‘til it’s gone. Although, it, when we’re talking seasons, does come back in about 9 months or so, as sure as the earth goes round the sun and day follows night and winter fall. If my math is right.

After more than a few kicks at that particular can, to every season, turn, turn, I think you can have your favourites and, given the opportunity, vote a preference with your feet, as assholes tend to say. For example, I, personally, could live wearing shorts year round and if I had to sacrifice never seeing a leaf turn colour again, it’d be a sacrifice I could see myself making. I could certainly get used to taking summer-like weather for granted, treating such unseasonably warm winter temperatures as not some blessing from above but as an environmental alarm.

Despite this run of uncharacteristically hot weather, it hasn’t been much of a source of conversation. (Traffic? Now that’s Los Angeles’s idle chatter). Certainly, I’ve heard nothing which you might consider obsessive on the topic of the weather. “Hot enough for you?” Nope. Been uttered within my earshot not a once. Perhaps because there’s some ambivalence from residents here about it. The blazing sun which, if they weren’t born here, lured them westward, provided the golden in the golden state, might represent something less benevolent these days.

The Bringer of Life has become The Destroyer of Worlds!

Maybe if we just don’t talk about it, carry on like none of this is anything out of the ordinary, everything will go back to normal, like it used to be when we didn’t always think about the weather, didn’t see our doom in every abnormal fluctuation in the thermometer. 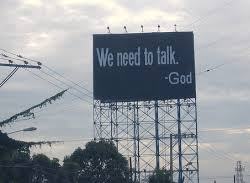 Simpler times that led directly to the anxiety filled, dread days we are currently living through.

So, don’t envy me, my time out here in Los Angeles. It’s no barefoot walk in the sand, at least for the most part. It’s just another day, pretty much like the previous day, almost always full of fretful sunshine.

— not not liking it herely submitted by Cityslikr

This entry was posted on Tuesday, February 16th, 2016 at 11:00 am and is filed under On The Road, To Live And Write in L.A.. You can follow any responses to this entry through the RSS 2.0 feed. You can leave a response, or trackback from your own site.