How to be Rob Ford and not Rob Ford at the same time? This is the quantum politics Mayor John Tory is trying to determine as he enters his 2nd full year in office. 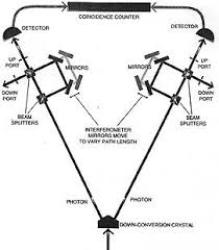 He misses no opportunity to point out to everyone and anyone who’s listening how he isn’t Rob Ford: the return of civility to City Hall, respect re-bestowed upon Toronto by the international community, no more of the proverbial drunken stupors.

The mayor, however, never wants you to forget that, like Rob Ford, he stands firmly opposed to taxes and waste. Firmly. We can build shiny new things, expand necessary services and programs, world class up Toronto, done and done on high hopes and pure hearts. All we need to do is tighten our belts. Root out efficiencies and dead weight. Like that.

What Mayor Tory needs us to believe and accept is that his predecessor’s mess was manifest purely in the personal not policy realm. Policy failures, such as the cutbacks to TTC service, had nothing to do with revenue shortfalls or fiscal mismanagement but were the direct result of character flaws. The years 2010-2014 projected as tabula rasa on the governance front. 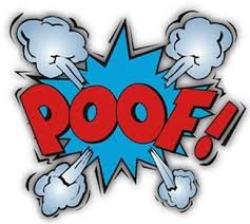 Nothing but scandal and misconduct.

The problem for the mayor is that he’s not really fooling anybody. Non-Ford supporter critics of Mayor Tory, largely from the left side of the political spectrum, see him fighting for at-or-below inflationary levels of property tax rate increases and fending off talk of new revenue sources and can only conclude that it’s pretty much the same old same old, business as usual. This is what’s got the city in the financial straits it currently sits in.

At the other end, the hardcore Fordists, see through Mayor Tory’s suggested City Building Levy, and scream (rightly) that it’s just a property tax increase by a different name. Like the Scarborough subway levy although, for this camp, that’s another thing entirely. The people want subways. Subways, subways, subways!

So Mayor Tory has certain Toronto Sun columnists and editorialists, who never see a tax hike as anything other than proof positive of government overreach, yipping at him 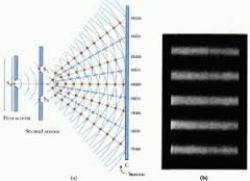 while those having battled the Ford assault on City Hall coffers and services regard this mayor as just a well-mannered faux-populist who really ought to know better. There’s little room left for him to balance, his base squeezed onto an untenable platform made up largely of wishful thinking and constant thanks that, it could be worse, we could still have a Ford as mayor.

Not to cut the Fords much slack on this but a solid argument could be made that they actually believed their tax-and-spend, stop the gravy train rhetoric. Basic math never really mattered to them. The numbers didn’t have to add up. An obstinate and willful stance in opposition to facts passed for principled politics for the Fords. They didn’t have to be right to be right.

But how can a politician like John Tory, elected to the mayor’s office as a sensible, reasonable, prudent alternative to the madness of the Fords pursue policies with similar reckless abandon? 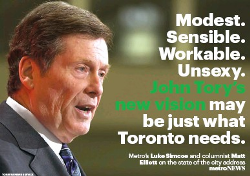 During the start of the 2016 budget process, he is being told by city staff in no uncertain terms that the city has a revenue problem. Its dependency on the property tax base and a still hot real estate market in terms of the land transfer tax is unsustainable. We must look seriously at other sources of revenues.

To propose an additional half-percent bump in the property tax rate, call it a ‘levy’, and look for further efficiencies at City Hall. It is as indifferent to staff advice and the reality on the ground as anything Rob Ford displayed. How is that sensible, reasonable or prudent?

Mayor Tory touts his willingness to work with his opponents at council on the Gardiner east hybrid to deliver a better option than the one he championed earlier this year as an example of the improved governance style under his watch. 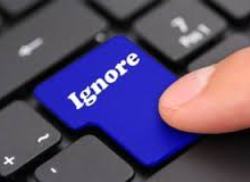 Yet, whatever option finally emerges will be, fingers crossed, the best of the worst option on the table, not to mention, in all likelihood, the most expensive. The obvious choice, the one touted by city staff, the sensible, reasonable, prudent option, was to tear that section of elevated expressway down, rebuild it at-grade. Mayor Tory ignored all that and pushed ahead with what he believed to be the most politically advantageous choice.

In October 2014, nearly 70% of Toronto voters delivered what was almost exclusively an anti-Ford mandate. Picking up a 40% plurality of that vote, John Tory has read those numbers and concluded that it was merely the personal scandals Torontonians rejected, the confrontational and abrasive governance style, too. We were all good with the bad math, the deplorable accounting practices, the complete and utter disregard of expert advice, the detrimental policy choices.

All of which Mayor Tory now vigorously pursues if in slightly different guises. Attritional and limited levels of tax rates and revenue sources. 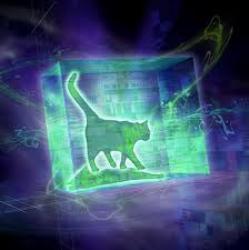 Quixotic cost savings quests. Ruinous public transit projects. Just like happened during the Ford administration. But somehow different with Mayor Tory at the helm, he wants us all to believe.

He’s got away with it for his first year. With reports due early in the new year on things like the Scarborough subway and SmartTrack, an impending budgetary shortfall forcing some tough choices out into the open, 2016 looks to provide a somewhat rockier road for Mayor Tory. How much longer can he continue trying to be not Rob Ford and Rob Ford simultaneously? Even the smallest of particles has to ultimately become one thing or the other.

This entry was posted on Monday, December 28th, 2015 at 11:26 am and is filed under Budget, City Building, City Council, Elections 2014, Municipal Politics, Newspapers, Press coverage, Race 4 Mayor, The Toronto Sun, Toronto Star. You can follow any responses to this entry through the RSS 2.0 feed. You can leave a response, or trackback from your own site.

One Response to An Indelicate Balance