It should be easy. At least, it should be easier. There is a problem. The Greater Toronto and Hamilton Area has become bogged down in congestion.

As it stands now, the region’s public transit network is not up to the task of helping alleviate the situation.

Build more transit. Pretty straightforward. It won’t be cheap, in the short term. In the long run, however, the savings will manifest themselves with a general increase in productivity that comes from increased mobility.

Besides, investing in major infrastructure isn’t exclusively about saving money. It’s about paying it forward. Investing in the future, in your children’s future, your grandchildren’s future. Playing your part in posterity like previous generation did with the roads you now use, the subway tunnels that get many of us around from point A to point B.

The details will always be prickly. The wheres and the hows will inevitably be politically loaded. (At times like these, it’s good to go back and re-read Jamie Bradburn’s great Historicist piece in Torontoist, Opposing the Subway.) Paying for shit we need is never a slam dunk case to make.

But it gets done because common sense and fair-mindedness prevail. Nobody loves paying taxes.

They’re just grudging necessities if we don’t all want to live in hovels in the hills.

Unfortunately, we have been living in an era where common sense and fair-mindedness are in short supply. This is how we’ve arrived at the state we’re in. Everybody hates paying taxes. They’re no longer grudging necessities but rather, egregious burdens on our lifestyles. All taxes are evil, as one of our local representatives has informed us.

In the face of such ill-will, our politicians have grown cowardly. With yesterday’s arrival of the funding report from the provincially appointed Transit Investment Strategy Advisory Panel – appointed by the province to undercut put distance between counter-balance the revenue generation report from another provincial government body, Metrolinx – the general consensus is, no political party is going to push ahead into a very likely election year with a platform of tax increases. Electoral suicide!

While it’s easy to blame them for such displays of cravenness, this is really nobody’s fault but our own. For a generation now we’ve swallowed the notion of low taxes and small governments as a path to prosperity. 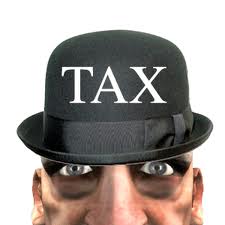 Not coincidentally, the very same generation where we’ve invested comparatively little in the public sphere. We sit behind the wheel of our cars, stuck in traffic, and wonder why. We wait half an hour for a bus before squeezing onto the crammed vehicle when it finally arrives, and wonder why. Bridges and overpasses crumble, and we wonder why.

This is the urban definition of the tragedy of the commons. We want and need something of a public service – i.e. transit – but think somebody else should pay for it. Gone is any sense of the greater good. Don’t look at me, jack. I already gave at the office.

There is little doubt that the ruling Liberals at Queen’s Park have for 7 years now, since the inception of Metrolinx, been doing their damndest to avoid the issue of funding public transit expansion in the GTHA. It was very much the very last piece of the puzzle they sought. When it came time to finally have the discussion, they desperately searched for partners to participate in what would definitely be tough talk.

And everybody blinked, looked the other way, made like it wasn’t their problem to help solve.

Toronto city council demurred to put in their two cents, choosing instead to draw up a list of we’d prefer nots.

The provincial NDP said the revenue should be generated solely from the corporate sector. Details to follow.

The PCs, now the fossilized remnants of the political movement that kick started the divestment in the public good, assure us we can totally pay for the transit we want by tightening our belts and dipping into the pools of unnecessary current expenditures to build capital infrastructure. Translation? Since Bill Davis, we are the party of could give a fuck about public transit.

There can be little doubt that the parties and their pollsters have delved deep into this issue and concluded beyond the shadow of a doubt that taxing (even dedicated taxing) and spending (even on something we should be spending on) remains a losing campaign platform. Nobody’s convinced Transit Champions will put their party over the top.

Before we tsk tsk our politicians for their unwillingness to nobly go down to defeat fighting for a good cause, maybe we should try and figure out how we can contribute to making it more of a winning atmosphere for pro-transit building proponents.

Efforts have started with organizations like the CivicAction Alliance, Toronto Board of Trade and the city’s Feeling Congested. But 30 years of conventional wisdom that’s told us governments are the problem isn’t effortlessly overturned. It’s difficult convincing people that their long held, self-centred, narrow focus is working at cross-purposes to their best interests.

It will seem as if we’re beating our heads against a brick wall because we, in fact, are. Eventually though, even the hardest stone breaks. You just have to keep pounding away at it.

This entry was posted on Friday, December 13th, 2013 at 3:15 pm and is filed under City Building, City Council, Metrolinx, Municipal Politics, Newspapers, Press coverage, Provincial Politics, The Big Move, The Globe and Mail, TTC. You can follow any responses to this entry through the RSS 2.0 feed. You can leave a response, or trackback from your own site.

3 Responses to Evading A Solution