I write this with an almost disinterested perplexity. Really? Do I have to? Really??

That the mayor of Toronto should, at the very least, attend the flag raising kick off to Pride week just a short drive walk from his City Hall office is beyond question to all but the most confirmed of homophobes. After a similarly uneasy Mel Lastman set aside his qualms and jumped feet first into the festivities, the die was cast. Some acknowledgement of the event had become part of a mayor’s job description.

The matter’s settled. End stop. Continued discussion of Mayor Ford’s rebuff is now officially boring and not much of a story anymore. He’s got issues, let’s just say. What other explanation could there be at this point?

But what perplexes me, frankly, is the manner in which the mayor once again went about excusing himself. And remember, we’re not talking about the parade here and its conflict with a family gathering up at the cottage. A non-holiday Monday gathering to read out the city’s proclamation touting tolerance, diversity, blah, blah, blah. At noon.

Right when the mayor usually starts his work day.

Now, anyone who’s been following along with Mayor Ford’s performance recently knows that’s simply a blatant lie. It’s incomprehensible that he couldn’t find the time to squeeze in 15 minutes to do his duty, make an appearance, read what’s in front of him and get the hell out of there before he got any of teh gay on him. As an excuse, it was as lame as it was lazy.

A couple months back, the mayor’s former press secretary and now Toronto Sun columnist something, Adrienne Batra, suggested (while advising him to at least attend yesterday’s flag raising event it should be noted), it wasn’t a case of Mayor Ford being homophobic as it was him not wanting to ‘tick off’ or alienate his political base. Somehow to her mind that makes it more understandable? What happened to that straight shooting, tell it like it is, just one of us guys the mayor said he was? That just sounds like the unprincipled type of politician the mayor used to rail about.

It’s also amazingly passive, not wanting to alienate anybody. What happened to that unruly, renegade, maverick Councillor Rob Ford that 47% of voting Torontonians supported back in 2010? That guy would’ve avoided like the AIDS plague anything to do with Pride and told us right up front why. The city shouldn’t be in the business of supporting any sort of lifestyle choice or something along those lines. 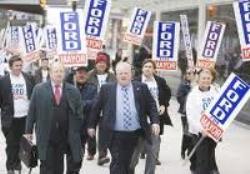 He wouldn’t be afraid of alienating his base. He’d be activating it with dog whistles and coded language, using the opportunity to burnish the Ford brand of small-minded neo-conservatism. What happened to that guy?

MIA. AWOL. Hiding behind some make-believe itinerary and, in a scene that’s becoming more and more routine, winding up increasingly isolated on the wrong side of an issue. A healthy majority of council was present yesterday including some of the mayor’s closest allies. (Wait. Maybe ‘closet allies’ worked better.) Deputy Mayor Doug Holyday. Speaker Frances Nunziata. Councillors Gary Crawford, Frank Di Giorgio and Cesar Palacio.

The mayor has simply stopped trying and leaves his more ardent defenders with little to stand up for him with aside from the usual meaningless tripe. Family first! (*sigh* We’re not talking about the parade.) Where does it say a mayor has to do anything about Pride? (*sigh* That’s like me, writing a Toronto municipal politics blog, saying who says I have to talk about the mayor?) It just comes with the territory.

Mayor Ford has become so detached from the proceedings at City Hall that not only is he blatantly shirking his responsibilities but he can’t even bother to come up with adequate excuses in an attempt to cover his tracks. The Mayor of Nothing, doing nothing and nothing doing as to why. If you ask me, it is the most curious of re-election routes.

This entry was posted on Tuesday, June 26th, 2012 at 8:30 am and is filed under City Building, Municipal Politics, Newspapers, Press coverage, The Toronto Sun, Toronto Star. You can follow any responses to this entry through the RSS 2.0 feed. You can leave a response, or trackback from your own site.