Who’s Nickel And Diming Us Now?

And in other city news, little league baseball teams, along with other youth organizations,

will now have to start paying permit fees to use city parks.

Lost under the heavy din of the subway v. LRT skirmish, fallout from the 2012 budget has begun. In raising the hourly rate for park permit fees and applying them to groups previously exempt, the city is now balancing its books on the backs of those who, for too long, have shirked their fiscal responsibilities: the children. More specifically, freeloading children who expect us to pay for their frivolous pastimes. Enough is enough, you prepubescent freeloaders. Didn’t your parents tell you? We’ve Stopped The Gravy Train.

Before you start screaming bloody murder, Mayor Rob Ford was elected with an overwhelming landslide mandate to nickel and dime us to death. Remember? So pony up that $13,000, Leaside Baseball Association. It’s only about $80 extra a player. If we have as many little leaguers in this city as we do car owners, that would more than make up for rescinding the vehicle registration tax that was totally nickel and diming them.

And yeah, I went there for that joke.

To be fair to the mayor, it was the taxpayer he promised to respect not snot nosed playground warriors. Maybe when they start paying taxes, he’ll start respecting them. 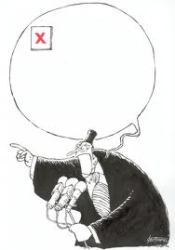 Until then, consider this a lesson learned. There are no free rides or free lunches unless, of course, it becomes politically expedient to provide such things. Playing a sport or participating in some form of activity should be seen as a nice to have not a need to have. Keeping a property tax increase below the rate of inflation doesn’t come free, folks.

We can only not have a revenue problem if we generate revenue, and we can only generate revenue through not raising taxes appropriately or cut services significantly, or both. In order to not raise taxes appropriately means having to do it in a more untaxing manner. Call them user fees instead. Sounds perfectly reasonable, right? You use it. You pay for it. What could be fairer than that.

It wasn’t like out there on the campaign trail then candidate Rob Ford hid his intentions from anybody. He was upfront and forward about who was going to pay and how much and how often. All about accountability and transparency. Nobody could be surprised about any of this now.

“I think it’s unrealistic to hit them now with a cost that they didn’t see coming,” Councillor John Parker said of the new increases in permit fees.

Somebody didn’t get the memo.

Somebody didn’t read between the lines.

This was all supposed to be so painless, yeah? Simply a matter of better bookkeeping, really. Two, three, four percent gone, easy. We wouldn’t even notice. Money was being spent that didn’t need to be spent.

Once that was tracked down and eliminated, like, in a heartbeat, the mayor knew where the deadwood was hiding out, stinking the place up, we’d be as right as rain. No fuss, no bother.

Nothing drastic changed for Rob Ford upon assuming the office of mayor. There were no large, unexpected gaps between revenues and spending. In fact, he was greeted with a surplus. Only the terminology changed. Cuts in revenue streams were called tax cuts and freezes. Cuts to services were now referred to as ‘adjustments’ or ‘efficiencies’. Annual surpluses that had been previously thought of as a sign of good fiscal stewardship became hideous oversights and lamentable accounting errors known as ‘one time savings’.

We can’t count on ‘one time savings’ that happen every year to bail us out all the time, folks.

Nothing changed except the tune. Campaign guarantees became more, m’eh, fuzzy guidelines, nice to haves not actually anything concrete.

Shrinking the size of government turns out not to be such a snap. People tend to notice when things they depended on suddenly disappear or cost more to use.

Elect me and I promise to reduce the services the city provides while charging more for the ones we maintain.

I wonder what kind of mandate Rob Ford would be touting now if, as a candidate, he’d talked openly and truthfully about how he actually planned on governing this city.

This entry was posted on Thursday, March 15th, 2012 at 1:22 pm and is filed under Budget, City Building, City Council, Elections 2010, Municipal Politics, Newspapers, Press coverage, Race 4 Mayor. You can follow any responses to this entry through the RSS 2.0 feed. You can leave a response, or trackback from your own site.

4 Responses to Who’s Nickel And Diming Us Now?