I don’t make a point of watching Michael Moore’s films. It’s not any problem with him as a filmmaker. It’s his politics. 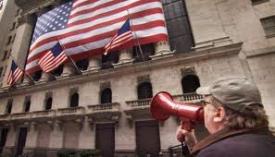 I tend to agree with him.

He doesn’t challenge my views and opinions. He merely reconfirms them. I am part of the choir he’s preaching to. So, why bother?

But then comes a lazy Sunday afternoon when I probably should be working and there I am, in front of the TV, watching my Toronto Raptors get crushed. I can’t stands it anymore and begin flipping. Just in time for the start of Capitalism: A Love Story. No, no. I really shouldn’t. Really. It’s just going to get me all worked up, mad, angry which, I already am after the Raptors’ drubbing. Suddenly, Iggy Pop starts singing ‘Louie, Louie’ and it’s over. How can I resist? I mean, I’m only human after all. 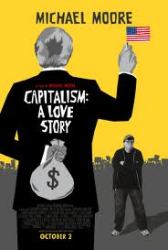 A weak, easily swayed, quick to excite human being.

Sparing you a movie review, let me just say that we need more polemicists like Michael Moore. And by ‘we’, I mean those of us on the left side of the political spectrum.Unswerving, uncompromising, irate, unreasonable, intemperate, pissed-off motherfuckers fed up with having ceded the apparent middle ground to the likes of crackpots from Rupert Murdoch’s News Corp., talk radio, our very own Toronto Sun, corporate backed think tanks and university economics’ departments, etcetera, etcetera, etc.

Our political and economic discourse has been infected by an ideological mindset impervious to rationality or quantifiable truth. No amount of reaching out and trying to find common ground will succeed. The very act of attempting to have a reasonable debate only gives credence, lends a cloak of legitimacy to what is nothing more than superstitious, mythical lore and cant. It is no longer helpful to engage or participate in such corrupted civics.

People, a lot of people, are angry. They have every right to be. Watching Moore’s film and its agitprop addendum, Inside Job, it is painfully obvious that our economic system is rigged and has slowly over the course of the last 30 years or so poisoned our political system with it.

Class war? Hell yeah. And it’s becoming more uneven with every concession we allow to happen in the name of “market realities” or “austerity measures”. We should be angry. It’s just that our anger’s misdirected.

Because the other side, the evil side, those representing corporate interests over those of the country or taxpayers and customers over citizens, are louder, richer, better organized and more unbending. They’ve seized the megaphone and shaped the dialogue. They don’t seek compromise. They demand acquiescence. When you possess the power, you don’t negotiate. You dictate.

That’s why we need more Michael Moores and his ilk. As direct and aggressive challenges to the status quo and what is embraced as conventional wisdom. While peaceable and fair-minded give-and-take would always be preferable, it’s been some time since any of that has actually happened.

The post-war social contract that was drawn up to highlight the rights and responsibilities accorded to citizens and corporations alike has been shredded into pieces, bit by bit, over the past 3 decades. In my humble opinion, we’ve all helped with that by trying to place nice and get along. It’s time that we started to kick up a fuss. Just like Mike.