Let me give you the ‘ethno-racial’ (to use Jan Doering’s phrase in his Martin Prosperity Institute paper, The Political Uses of Race and Ethnicity) makeup of the current Toronto city council (and I’ll throw in gender to further the point).

I bring this fact up not so much in response to Mr. Doering’s paper but in reaction to it. From my very un-scholarly perspective, it all seems solidly research-y. No aspersions cast in his direction. That’s just an admission I’m a fucking idiot.

My reaction to it is in the direction of the ethno-racial ‘reputation’ of this city as seen by Mr. Doering’s in his examination of campaign material and literature from Toronto’s municipal campaign last year in his comparison to the most recent local election in Chicago. “In Toronto,” Doering writes, “candidates of all backgrounds portrayed immigrant ethnicities as a valued source of culture and symbolically included these groups in the political process.” ‘Portrayed’. ‘Symbolically’. I have no idea if Doering intentionally used such layered language, let’s call it, but to anyone who watched Toronto’s 2014 municipal election unfold, such words certainly have more than one meaning.

Recently, a large study of municipal elections found that race is the single most important factor shaping electoral outcomes in the United States… Moreover, Chicago and Toronto represent starkly different ethno-racial contexts, which provides analytic contrast. Toronto is widely celebrated as a successful model of multiculturalism, while Chicago is known as a hotbed of ethno-racial contestation.

Hoo-rah! Am I right? Toronto ‘widely celebrated as a successful model of multiculturalism’, a haven from all that racist animosity we smugly view emanating from the States. We don’t see colour, to quote Stephen Colbert. Ours is a post-racial society.

And yet, a mere 11% of our city council members are made up of visible minorities.

How do we square that circle?

“In Toronto,” Doering states, “candidates never invoked race and ethnicity as a barrier to upward mobility or as a site of struggle.”

Maybe someone should tell that to Ward 2 Etobicoke North city council candidate Munira Abukar who had her campaign signs defaced, informing her to “Go Back Home”. Her campaign team had garbage thrown at them from a passing Purolator truck. “Terrorist!” 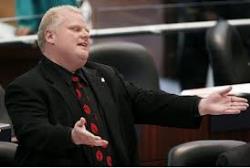 Rob Ford was also caught on video, drunkenly (and presumably crack-inducingly) patois-ing while waiting for a late-night order at Steak Queen. As a city councillor a few years earlier he suggested that those “Oriental people work like dogs… The Oriental people, they’re slowly taking over…” and he couldn’t understand the outrage. It was a compliment! What’s wrong with you people?

Remember, despite all that, Ford remained a serious contender in his bid to be re-elected mayor until ill-health sidelined him from that race. Even then, he was easily elected in his old spot as city councillor. Racist?! Who, us?? Look what’s going on in Ferguson, Missouri!!

In one of the most telling examples of this trait of ours, Doering recounts the clutching of pearls and mock outrage episode in the mayoral campaign after candidate Olivia Chow’s advisor, Warren Kinsella, called rival candidate John Tory’s transit plans ‘segragationist’. Never mind that the statement was true. Tory’s plans left much of the already under-served inner suburban areas of the city, areas home to many of the city’s immigrant and visible minority communities, under-served. You just don’t use words like ‘segragationist’ here in the culture mosaic that is Toronto, Diversity, Our Strength.

Huffing and puffing, Tory, a firm disbeliever in the notion of white privilege, never really denied the core of Kinsella’s accusation, just the use of such an ugly, non-Torontonian word. “Ill-considered”, he told the press, “if you look at what’s going on in North America right now, especially in Missouri and so on.” And so forth. No, we’re good.

Finally, candidates overwhelmingly selected ethno-racial references that “fit” with narratives of ethno-racial politics in Chicago and Toronto. Making this point requires taking a step back. Comparing the patterns of how ethno-racial references were distributed across the two cities, politics in Chicago turned out to be much more divided than in Toronto. This is consistent with existing scholarship… Importantly, however, it is also consistent with voters’ perceptions. Candidates built on the perception of Chicago as an arena of zero-sum group competition and Toronto as a multicultural sanctuary. Thus, African-American and Latino candidates in Chicago mobilized perceptions of exclusion, discrimination, and conflict to promise political leadership in fighting these injustices. They proudly cited endorsements from ethno-racial advocacy organizations. And they largely abstained from using those ethno-racial references that candidates in Toronto heavily relied on: invoking ethnicity as culture and symbolically including groups in the political process by using their heritage languages. These forms of addressing race and ethnicity were persuasive because they were consistent with widespread narratives about how ethnic politics worked in these two cities. Conversely, using those narratives reproduced them as organizing principles of ethno-racial politics. In other words, the findings reveal not only ethnic conflict and harmony, but how conflict and harmony are socially constructed.

This leads to the question of whether certain ethno-racial references cannot successfully be made because they clash with widely-shared narratives. [bolding mine]

The “widely-shared” narrative in Toronto is that, at least in comparison to the United States, there’s no racial or ethnic drive here. This feeds “voters’ perceptions”, freeing them from much self-reflection when they go to the ballot box, convinced they didn’t vote for that black guy or that Muslim woman or Asian candidate because they were black or Muslim or Asian. Race has nothing to do with it. How could it? This is Toronto.

So, it’s just a coincidence that only 11% of city council is made up of visible minorities in a city where that demographic is 3 to 4 times that size. Nothing to see here.