The less said about yesterday’s CityNews mayoral debate, the better. Having said that, let me just say…

If the intent of CityNews’ debate organizing braintrust was to make an already raucous, harsh, boisterous campaign even more so, to up the volume from an 11 a couple notches louder, well, well done. Slow clap. Bravo. Kudos. Author! Author!

No, seriously. I want to know what fucking fucknut was behind the idea of opening up the floor for 3 entire minutes to 5 candidates vying for elected office. Who in their right fucking mind thought that was a good idea?

I can just hear the conversation.

You know what would be awesome? Just letting everybody talk at the same time. For 3 minutes. No interruptions. No rules. It’d be like a debate ultimate cage match. 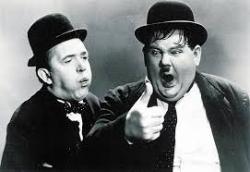 Wouldn’t that be great! It’s never been done before.

And you know why that is? Because it’s fucking insane. What did they expect to happen in that scenario? Anything other than what did? Five grown-ups trying to get a word in edge-wise, trying to spit out sound bites, trying to get digs in at their opponents.

Of course Rob Ford excelled in that format. How could he not? He was in his element.

As was pointed out this morning on Twitter, “unconstrained by fact” frees you to just let fly with any old talking point you’re trying to deliver. Any counter to that, any sort of rebuttal comes across as nothing but additional noise. Moreover, being unconstrained by the normal rules of civil discourse as we know the mayor is — he yells at and badgers people all the time – of course, he looked at ease, right at home.

Anybody, I don’t know, with a even a passing modicum of civility or graciousness, probably found themselves a little hamstrung by politeness in that particular arena of combat. This ain’t Marquis of Queensbury rules, folks. The floor is now open, competitors.

That said, I think the mayor’s opponents are going to have to come to terms with the fact that they will be sharing the stage with a man who shamelessly and relentlessly spouts lies and mistruths. If allowed to go uncontested, he will fill whatever room they are in with a dense fog of fabrication, blanketing the debate in an alternate reality where he is a fiscally prudent manager of taxpayers’ money and a repentant addict well on the road to recovery. Or that his personal issues have had no affect on his performance as mayor.

None of it is true. He must be continually called on to the carpet for trying to pretend it is. The man loves his catchphrases and snappy slogans, short bursts of uncomplicated communication. Well, how about this.

You lied about not smoking crack, Mr. Mayor.

You lied about a newspaper reporter talking pictures of your children in your backyard.

You lied about how much money you saved the city.

You lied about cuts to services.

You are a proven liar, Mr. Mayor. You cannot be trusted. You’re a liar. Lie, lie, lie.

Hit that note again and again and again. Establish over and over that anything the mayor says should be considered suspect, in all likelihood more fiction than fact. He’s that unhinged guy on the street corner yelling about alien invasions and a United Nations conspiracy. Truth is not part of his vernacular.

A more rigorous debate format should help facilitate that. Clearly, CityNews had little interest in anything more than stirring up the pot and promoting a bare-knuckled brawl. That favours no one except a brawler. One thing we know for sure about Mayor Rob Ford is that he loves to brawl.

I will give CityNews credit for one thing. Their hosting of ‘fringe’ mayoral candidates on their livestream during TV commercial breaks.

For those so inclined, you could click over and see what they had to say about the issues being discussed by the big 5. It wasn’t much, mere snippets really, but enough to know that the likes of Morgan Baskin, Robb Johannes and Richard Underhill were worth continuing to listen to.

It also proved that CityNews should stick to what it’s good at it. Working out on the fringe. It has no place operating in the mainstream, pretending to be a responsible provider of news and information. Unfortunately, with last night’s debate, it only succeeded in bringing everybody involved down to its sad, sorry level.

— still in shockingly submitted by Cityslikr

This entry was posted on Thursday, March 27th, 2014 at 11:38 am and is filed under Elections 2014, Municipal Politics, Press coverage, Race 4 Mayor. You can follow any responses to this entry through the RSS 2.0 feed. You can leave a response, or trackback from your own site.

4 Responses to A Debatable Debate