If Mayor Ford really wanted to turn the page on the nasty car accident that’s been his last year in office or so, 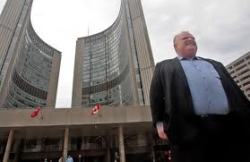 he could do worse than to enthusiastically adopt the city CFO’s report on transit funding strategies at Executive Committee meeting today. Instead of spending his time and political capital trying to eradicate any and all evidence that David Miller was ever mayor of Toronto, he could now simply absorb what was his predecessor’s most cherished legacy. Out transit the one time Transit Mayor. You want transit? I’ll give you transit, folks.

Of course, no such thing is going to happen.

The initial response coming from the mayor’s office to Cam Weldon’s report is pretty much par for the course for an administration that’s only viewed the transit file as a potential wedge issue. Private sector this from Councillor Doug Ford, senior levels of government that from the mayor. Any talk of new sources of revenue dedicated to building transit is just a whole lot of tax-and-spending in disguise. Team Ford, no can do.

Instead, Mayor Ford seems intent on keeping to the tried and true path of obsessing and trying to exploit inconsequential matters in the hope of righting the ship. 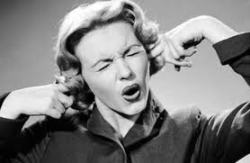 Over on Twitter last Friday, the mayor’s former campaign director and one of his ex-chiefs of staff, Nick Kouvalis suggested 70% of suburban Toronto was unhappy with the plastic bag ban and he predicted Mayor Ford could win re-election on that issue alone. Hyperbole aside (and noting Mr. Kouvalis doesn’t officially speak for the mayor at this juncture), it does point to some skewed priorities from those in the mayor’s corner. They seem unwilling, uninterested and/or unable to cope with the more pressing concerns the city faces.

So what happens when one of those pressing concerns comes before the mayor’s Executive Committee for its consideration?

I imagine Mayor Ford will try to bury the CFO’s report under procedural manoeuvrings. Out of sight, out of mind; defer it in order to keep it from council’s hands for a wider debate. The city’s got bigger fish to fry than contributing to a region wide debate on transit building. Those plastic bags aren’t going to unban themselves, people.

In other words, the mayor’s probably looking to excuse himself from the discussion and hoping to sideline the city along with him. Go on ahead without us.

We’ll just stay here and roll up into a ball of irrelevancy.

How many members of his Executive Committee are willing to stick their heads in the sand along with the mayor? This isn’t just some left-right, downtown-suburban issue we’re talking about here. Toronto’s Board of Trade is pushing this discussion. The bigwigs of the region’s post-secondary school institutes are demanding action. John Tory’s Greater Toronto CivicAction Alliance group will be rolling out their attempt to kick start the debate this week.

But the mayor of the largest city in the entire GTHA wants to take a pass on participating?

Enabling such a craven approach will not reflect well on those who do so. Transit is too important an item to continue playing politics with it. We’ve avoided having this conversation for at least a generation now. Any elected official once more endeavouring to push it off onto someone else’s plate needs to seriously question why it was they sought public office in the first place. And voters need to question why it was they supported them. 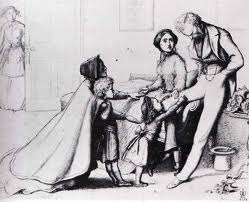 This entry was posted on Tuesday, October 9th, 2012 at 8:30 am and is filed under City Building, Municipal Politics, Toronto Star, TTC. You can follow any responses to this entry through the RSS 2.0 feed. You can leave a response, or trackback from your own site.