On The Plus Side

Lest anyone be dejected that no good came out of this month’s clusterfuck shitshow of a council meeting, take heart. I can think of two things. Or people, as it were.

A couple rookie councillors emerged as genuine, forceful bona fides on the council scene. Both faced their own respective trials by fire over the last few months and stepped up from being hopeful prospects and into full time positions in the majors. While tough to celebrate given the circumstances, it should still be cause for at least a brief round of applause.

As any long time follower of this blog will know, way back when in the summer and fall of 2010, we were not supporters of then candidate Michael Layton here in Ward 19. In fact, we heartily endorsed one of his opponents in the race to replace Joe Pantalone, Karen Sun. Having watched a couple of the debates and briefly chatting with Mr. Layton when he came knocking at our door, nothing about him jumped out favourably at us. Like many constituents in this ward, we looked at the baggage/advantage he carried being the son of a former city councillor and now leader of the federal NDP and stepson (we think) of another former city councillor and current NDP MP with a certain degree of disdain. There was talk of needing a fresh start without any attachments to the past.

That said, having him an elected as councillor was not the worst thing that happened on election night. Rob Ford’s now mayor?! Cesar Palacio was re-elected!?

Certainly Mr. Layton did not assume office with any air of entitlement. I think I’d even go as far to call him tentative, not an immediate presence in council chambers. He seemed to go for the slow rollout, getting his sea legs, learning the ropes. I softened toward him when he hosted a town hall gathering during the lead up to the budget battles. Admitting that he was new to the process and didn’t have all the answers, he brought in former budget chief Shelley Carroll to help explain to the gathered residents what to expect when council began debating the budget.

Councillor Layton’s first mini-splash came during a subsequent council meeting when, in the middle of speaking on something or other, he was set upon by Councillor Doug Ford who took a rare turn to actually speak out loud, blustering and burping the usual nonsense that flows forth from his gob. Layton held his ground, effectively counter-punching until Brother Doug ran out of steam and plopped himself back down to his seat.

The feistiness flared up again Wednesday when Layton attempted to get Councillor Denzil Minnan-Wong to commit to tearing up the Jarvis Street bike lanes only after the alleged protected lanes on Sherbourne Street were functioning. As is his way, Minnan-Wong avoided addressing the issue by spuriously accusing Layton of spearheading the building of the Fort York bridge, in place years before Layton was elected. Layton angrily called Minnan-Wong on his crap and demanded a retraction. Minnan-Wong complied in his typical weasel fashion to which we have become accustomed.

Ah, yes. The Fort York bridge. Councillor Layton’s nasty introduction into the politics of the Ford era. At last month’s Public Works and Infrastructure committee meeting, Ford loyalist, David Shiner, greasily sandbagged Layton with scant advance notice, that they were taking the bridge back to the drawing board and the issue was as good as dead. Layton scrambled to get the necessary 2/3s majority vote to bring it to council for debate but, unsurprisingly, fell short. Tough lesson learned but battle stripes earned. 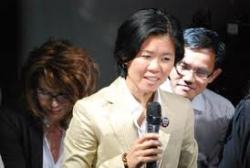 The Public Works and Infrastructure committee also initiated Councillor Kristyn Wong-Tam into the rough and tumble, oily manner of city politics, Ford style. Like Mike Layton, she too was blindsided at the very last minute about a project under threat in her ward. You might’ve heard about it. The Jarvis bike lanes? Mousy but obedient councillor, John Parker gave her about a 5 minute heads-up, after all the deputations had been heard, that plans were in the works to remove the lanes. You don’t have any problems with that, do you councillor?

Like Layton, Councillor Wong-Tam fought an uphill, losing battle in defense of the well-being of her ward but in so doing helped expose the members of the Ford team as mean-spirited, small-minded and categorically unable to defend their positions. When she submitted her 3 motions to save the bike lanes on Jarvis or to ensure they were not removed before the promised Sherbourne lanes had, in fact, been established, Wong-Tam simply embarrassed Councillor Karen Stintz who stood up to try and poke holes in the motions. I don’t know if Stintz didn’t do her homework or was simply performing a half-hearted gesture of solidarity with the mayor but she ended up doing herself or her side no favours. With each hard return from Wong-Tam of Stintz’s goofball queries, it became painfully obvious that, despite being the veteran in the exchange, Councillor Stintz was simply out of her depth and out her league.

So what, you’ll say. At the end of the day, the ill-informed and malignantly intentioned won out. Hoo-rah for the losing side and their hopeless causes. But I happen to think strong character is best forged in defeat. Winning is easy especially if it’s achieved through deceit and, let’s call it what it was, treachery. It’s how you handle yourself and what you learn when you come up short that ultimately counts. Councillors Layton and Wong-Tam were tested and met the challenge. I think we got a couple of keepers on our hands.

This entry was posted on Friday, July 15th, 2011 at 11:51 am and is filed under Budget, City Building, City Council, Elections 2010, Municipal Politics. You can follow any responses to this entry through the RSS 2.0 feed. You can leave a response, or trackback from your own site.

7 Responses to On The Plus Side