Being At Home In The City

Unexpectedly but appropriately enough, there was talk this past Canada Day of hunting. Appropriate because this is a country founded, at least in part, by hunting. Hunting, trapping, fishing. All that coureur de bois stuff.

Unexpected, since I know nothing about hunting and other assorted hands-on methods of putting food on the table.

I say this without a trace of boastful pride, having just never learned about or participated in such sports. There was that one time I reeled in a large mouth bass and the only gun I have ever fired was of the pellet variety. So I was very interested over the weekend to discover how exactly a gun works, how gauges are determined, etc., etc.

What struck me most about these conversations, though, was how in touch with their surroundings the folks were who spent their time hunting and fishing. At home in their environment, knowing everything there was to know about every hill they climbed, every point they positioned themselves at while tracking their quarry. Much of our conversation took place on a boat as we meandered over a lake where various points of interest and local history were revealed.

It all got me to thinking and wondering if those of us big city dwellers could ever attain such equanimity with where we live. Is the urban idea still too alien to us, what with our hundreds of thousands of years living directly off the land, huddled in small groups against the elements, putting on our best, bravest and most stoic frontiersmen face? Towns are where we went to conduct our mercantile business, stock up on supplies and get our debauched groove on if the need arose. No decent person was meant to live in town.

Until just recently, the notion of urbanism has been viewed as a necessary evil at best, with great suspicion at worst. One might argue that even the post-World War II stampede out to the suburbs was a negative reaction to city life. Big houses with big yards that you escaped to. No one lived in a city by choice but by necessity. 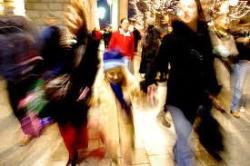 So how can someone develop a positive affinity toward such a place? Can we ever be truly at home in our urban homes? We were born and evolved in the great outdoors and that is our natural habitat. Anywhere else is simply a compromise. Settlers, you’ve settled.

Of course, that flies in the face of the last six thousand years of history, much of it made in the cauldron of urban centres. The city-states of Ancient Greece. Rome. The birth and flourishing of the European Renaissance in Venice and Florence. East meeting West in Byzantium-Constantinople-Istanbul. London. Paris. New York. Shanghai. Beijing. Mumbai. Rio de Janiero and São Paulo. Civilization as we know it is the creature of cities.

So we should be comfortable in that habitat. Not all of us. This isn’t intended as an either-or argument. But for an increasing majority of people worldwide, cities are where we live, where we work, where we play. Cities are our homes.

Instead of fighting that idea, we need to embrace it and figure out the best ways to make our home, well, livable. Dare I say, desirable? For everyone who chooses to put down stakes here and not just those who can afford it.

All of which may be at the core of the struggles currently being waged in these parts. On one side are forces who still view cities and their teeming masses, density and diversity with great suspicion. Something to be tamed and brought to heel. Yes, I’m thinking about Toronto’s current mayor and his cadre of anti-urban reactionaries. Witness Councillor Giorgio Mammoliti’s self-righteous crusade to end the city’s Pride funding. You’re free to be gay. Just not on my dime. His blinkered obsession reveals many things but chief among them is his uneasiness with those living their lives differently than he does his. The Attack of the Anti-Urban Urbanites, let’s call it.

The thing is, those differences are the very essence of which not only makes cities great places to live but vibrant centres of constantly evolving civilization.

And for those of us standing in opposition to the backward, destructive thinking, fighting a rear-guard fight over battles we thought were already won, that is what we have to remember. We’re not just defending our home or way of life or our preferences. We’re marching to the beat of history here. We’re defending civilization itself against an attempted onslaught from those unprepared to let go of a past that is no longer applicable and whose continued hold should only be viewed as detrimental to our future well-being.

Canada may once have been a nation of hewers of wood and drawers of water. Many here are happily still descendants of such stock. But at this juncture in history Canada has become a full on urban nation. We have to accept that fact. Those who don’t are simply standing in the way, struggling against the tide. It is a losing battle on their part. They just don’t know it yet. We do.

— on guardedly submitted by Cityslikr

This entry was posted on Wednesday, July 6th, 2011 at 8:28 am and is filed under City Building, Municipal Politics, On The Road, Philosophical Musings, Pop Culture. You can follow any responses to this entry through the RSS 2.0 feed. You can leave a response, or trackback from your own site.

3 Responses to Being At Home In The City