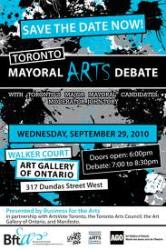 Having decided upon HiMY SYeD as our nominee for 6th mayoral candidate on Friday (and remember to go to ArtsVote Toronto 2010 to vote for the 6th candidate that you’d like to see at their debate on Septemeber 29th), a couple other notes of interest came to our attention as we searched through the archives here at All Fired Up in the Big Smoke.

Selwyn Firth, subject of Meet A Mayoral Candidate IV — the one where Apollo Creed gets killed by the Soviet robot — delivers two lectures to outline a couple of his platform planks. Misinterpreted Climate Science, and Super Clean Incineration will be held Wednesday September 29th at 7 pm in J.J.R. McLeod Auditorium U of T Medical Sciences Building. Then on October 8th in the OISE auditorium at 8 pm, Mr. Firth will be dealing with the problem of traffic congestion here in Toronto and how to solve it.

Included in his proposals will be the need to build the Spadina Expressway. So Rocco Rossi fans should mark the date in the calendars. For more details, go to Selwyn For Mayor.

And we were surprised to learn that Sonny Yeung, our very first mayoral candidate profile and one of our favourite contributors to the Comments section here, packed in his aspirations for the office of mayor and decided to run for a school board spot in Ward 22. Now, we don’t know much about kids, finding them to be largely loud, shifty, always wanting something from you and never really willing to pull their own weight. (Knock on wood we’re finally rid of ours, having packed the last one off to university this year. Fingers crossed none of them think they can return home when they find themselves inevitably “in between jobs”.) But we do know that the kids of Ward 22 could be served worse by having someone aside from Sonny Yeung as school board trustee.

We have met Mr. Yeung at a couple elections functions during the campaign and found him to be very engaged with and informed about the issues at hand. He is diligent and actively participates in the civic arena. Not at all up on the particulars at the TDSB in Scarborough (where Ward 22 is located), we are hardly in a position to endorse Mr. Yeung but he certainly seems worthy of consideration. We wish him the best of luck in the race.

In fact, we extend best wishes to all those candidates like Sonny Yeung and Selwyn Firth for their continued determination and conscientiousness. Campaigning, largely outside the media spotlight, displays a true commitment to our democratic process and a healthy desire to offer up solutions toward making Toronto a better city for all.

We applaud you. Keep on keeping on.

This entry was posted on Sunday, September 19th, 2010 at 12:31 pm and is filed under Elections 2010, Municipal Politics, Race 4 Mayor. You can follow any responses to this entry through the RSS 2.0 feed. You can leave a response, or trackback from your own site.

One Response to A Sunday P.S.A.