Massacre At The AGO

To cut the 6 front running mayoral candidates a little slack, one could say that they might’ve been sandbagged at the AGO’s Pug Talk: A New Mayors Vision For Architecture, Design and Planning In The City Of Toronto last night. Before the roundtable discussion commenced, Toronto’s former Tiny Perfect Mayor, David Crombie, took to the stage and warmed up the crowd with talk of a “continuation of regeneration of the public realm”. He spoke of “reimagination, reinvention and reinvestment” in the “civic magic” that makes all the difference between simply living in a city and loving living in a city. In 3 short minutes, I found myself plotting a Draft Crombie For Mayor movement. 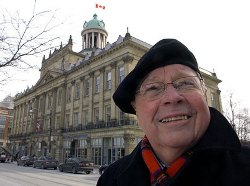 Crombie was then followed by a grade school participant in the Pug Ed program which is “… designed to engage senior elementary school students in architecture, design and urban development…” who succinctly laid out a very green (environmentally speaking) plan of what he would do if he were mayor. As he finished up, one of the mayoral candidates said it was a good thing that he wasn’t running for office now. Truer words have never been spoken by anyone on the campaign trail.

And then came the real kick in the sack. A video clip of Councillor Adam Vaughan (clip starts at about the 83′ mark) taking part in an earlier Pug Talk where he spoke of the choice between wanting to “build a civilization or sustain a settlement” and needing to elevate the notion of city building above merely filling potholes and fixing street lights.  High falutin’ stuff, as Rob Ford and his zombie army might say if they knew what it meant, and certainly leaving many in the audience wondering why Mr. Vaughan wasn’t running for the mayor’s job.

The warm up act finished, it was now time for the headliners, and I don’t think it much of an overstatement to tell you that the next hour and three-quarters was nothing short of a big ol’ fucking train wreck.  It might’ve been more fun to watch if, you know, our collective futures weren’t riding on all of it.  I didn’t think it possible for a city that elected Mel Lastman mayor twice could find itself less than a decade later with even dimmer prospects. But it was difficult to shake off that sense after the performances I witnessed last night.

Joe Pantalone, bless his soul, I think has his heart in the right place. As a progressive, left wing voter, my sympathies are with him. It’s his struggles to straddle the middle way — distancing himself from the current administration that he’s been an integral part of but is the bogey man of this campaign, while trying to point out the positive aspects it has delivered — that leave him floundering, easy prey for vacuous political sharks like George Smitherman and Rocco Rossi. He’s fighting their fight and getting beaten to the punch constantly.

For a second consecutive night, Giorgio Mammoliti delivered what I saw as the most impassioned, least calculated performance.

His wild swings for the fences never ever hit one out of the park or, quite possibly, ever got him safely on base but it seemed that he tied Pantalone for at least trying to mould their responses to the room they were speaking to. There was a sense Mammoliti believed the topic at hand was important even if he wasn’t sure about what needed to be done about it.

It was performance miles ahead of the rest of the mayoral pack.

Rob Ford was so far out of his element that it was almost embarrassing to witness. But not that embarrassing. He clearly has no mind for complex issues and his adaptive powers are equally absent. Despite having been given the questions beforehand, he answered none, only using them to launch into his now familiar spiel of out of control taxing and spending, blah, blah, blah. 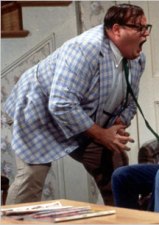 He was heckled by a suit just into his first rambling response and by the end the crowd was openly laughing at his answers especially the one where he claimed to have made Rexdale into Rosedale.

Was Rob ruffled? Hard to say. He always seems ruffled. For him, the crowd’s reaction had nothing to do with his performance. They were all just rude and a bunch of NDPers, he told reporters afterwards. Apparently, the man simply sees culture, education and discourse on weighty issues as some sort of socialist plot.

George Smitherman didn’t really use the opportunity of Ford’s missteps to further his cause much as he just was popping in on his way to another engagement long enough to take a couple swipes at Ford and Pantalone, buddy up with Rocco Rossi and mimic some of the key words and phrases he’d heard bandied about. Public realm. Elevated urban planning.

We found it telling that the man had just returned from a trip to China that included a stop in Shanghai, arguably one of the architectural marvels of the modern world, and he made no mention of it at an Architecture, Design and Planning roundtable discussion!!! I guess his engineers hadn’t got the opportunity to program that into his hard drive yet.

As for Rocco Rossi and Sarah Thomson, they are little more than talkers of talking points. Rossi, the smoother of the two, seemed the most knowledgeable about the subject at hand and spoke baritonely about beauty and planning but in examining my notes, I realize I jotted down nothing of what he actually said. And Thomson still sounds as if she just recently joined the debate club. Her approach is exhaustively Wikipedian, able to talk about any topic that comes up but for no longer than 2 minutes a pop. Her ability to adjust to the crowd is as equally suspect as Ford’s.

Last night speaking at the AGO to an audience with a large contingent of designers and architects, she began one statement as follows: “I don’t know if you know the ROM…” Yeah, my guess is they probably do, Sarah.

What was most discouraging about this particular evening was that it offered up the perfect opportunity for the candidates to unveil a grand vision of why they want to be mayor and how they see the future of the city coming together under their leadership. Not one of them rose to the occasion. The proceedings had started out with glimpses of heavyweights in the forms of David Crombie, Adam Vaughan and a pre-pubescent child. It ended with a choice of lightweights. 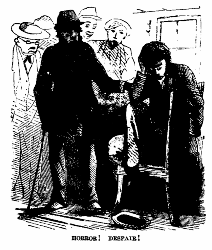 It may be time to turn our attention to our respective council races in order to send strong representatives to City Hall in the hopes of at least trying to mitigate the disaster that’s taking shape in the race to be mayor.

This entry was posted on Thursday, June 17th, 2010 at 11:03 am and is filed under Academic Studies, City Building, Elections 2010, Municipal Politics, Philosophical Musings, Pop Culture, Race 4 Mayor. You can follow any responses to this entry through the RSS 2.0 feed. You can leave a response, or trackback from your own site.

4 Responses to Massacre At The AGO