In the spirit of the season, I’ll assume that exclamatory statement to be an anomaly. 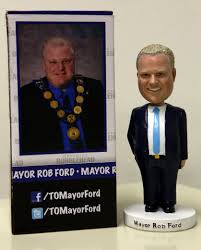 Something that was inevitably going to be said when there’s somebody standing hours in line to purchase a 2nd edition Mayor Rob Ford bobblehead doll, and a Santa Claus at City Hall, waiting to serve the mayor notice of a delivery of 30 wheelbarrows full of coal. What else could we expect? All things considered, we probably got off easy.

I mean, the crowd didn’t swarm and stomp Santa Claus to death. I’d like to think that was out of a sense of decency rather than fear of losing their spot in line.

What we absolutely shouldn’t do here is to make mass assumptions about what this all means for next year’s mayoral election race. Mayor Ford is a celebrity now, more so than an incumbent politician. Star of newspapers and the small screen, as seen on Jimmy Kimmel, David Letterman, Saturday Night Live and The Daily Show with Jon Stewart. Everybody wants a piece of him.

These things are collectibles. So why are we surprised hundreds of people lined up to get in on the action? You’d be crazy not to!

Sure, Fuck You Santa guy was probably a hardcore Ford loyalist. The person who told protest Santa to get a job, while standing in line, waiting for a bobblehead during a work day, had to be one too. There were chants of ‘4 More Years! 4 More Years!’ from some of the crowd when the mayor finally appeared (about 40 minutes late, as usual). They’re out there. They’re not going away.

But let’s not fuss and fret that it’s proof of Ford Nation’s electoral power and might. That would be as bad as taking the results of a Forum Research poll seriously. Think of it more as the remnants of what was once a so-called Ford Nation, the dregs,

the last of the implacable adherents, true believers, the most zealous of the zealous.

Who else in their right mind would brazenly tell Santa Claus to fuck off in the rotunda of City Hall less than a week before Christmas?

I choose to believe that there are not enough of those types in Toronto to be much of a political force to be reckoned with.

Merry Christmas to all, and to all a good night!