I spent a couple days in Irvine, California last week. It was the longest 4 hours of my life!

That’s sort of how the joke goes, right?

I went to Irvine last week to visit what is considered to be one of the best examples of a “planned-community” there is in post-war North America. It is full of green space and bike trails, nationally ranked schools, good paying jobs, a robust economy and all the other good and positive things you read in local brochures. Which made the gentleman’s suggestion at the Chamber Tourist office that I go to Newport Beach if I only had a few hours in Irvine somewhat strange.

I’ll confess. I am suspicious of these master-planned communities. They elicit thoughts of Disneyland, and its real world manifestation, Celebration, Florida. Not so much communities as enclaves, escapes from the world around them instead of additions. This is my bias that is more visceral than well-thought through.

The city of Irvine itself was something of a reaction against the ill-planned and wild west suburban development that haunt urbanists’ dreams, the types of formless suburban tracts then encroaching upon Irvine, spreading in all directions out from the city of Los Angeles. This particular area of land was owned by one family, the Irvines, natch,

who successfully ranched and farmed it for about a century before turning their eye toward urban development. The idea, initially, was to carefully construct a city of 50,000 people, radiating out from a University of California campus, Irvine, natch, sitting at its centre.

Irvine is now a city 5 times that size, the university campus an integral part of but not at the centre of the city. Irvine is, according to the Chamber’s 2015 Community Report, “an economic powerhouse…the address of choice for Fortune 500 companies and start-ups in cutting-edge industry sectors like life sciences, advanced manufacturing, information technology and digital arts and media.” The city regularly tops lists of the country’s most liveable and safest cities. It’s young, with a median age of 34, and fairly well-to-do, a median household income of over $90K.

Irvine sees itself as the ‘centre of Orange County’. 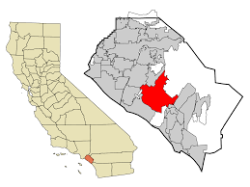 Depending on your perspective this can be seen as either a) simple civic boosterism; b) more or less geographically correct; c) damning with faint praise.

It dawned on me during my brief Irvine outing that cities are built (in a planned manner or ad hoc) not primarily to be visited but to be lived in. To really get a sense of the place, I should’ve brought my bike down south with me, tried out the off-road trails that, apparently, would connect me to everything the city had to offer. Evidently, I was missing something.

Here were all the progressive fundamentals taught at architecture and planning schools since the 1920s (earlier if you count Ebenezer Howard): superblocks, pedestrian paths, mixed uses, integrated landscaping, public amenities. Here were concepts championed by Catherine Bauer, Lewis Mumford, Clarence Stein and other reformers, in the decades when suburbs were not yet reviled as soulless bedroom communities. And here was this vision built, lived in, mature, and thriving. Even as I remembered the intellectual planning history, my reaction was primarily emotional. Before me was not a theoretical treatise, but a real neighborhood with real architecture rooted in good principles: logically planned town organization, the useful integration of nature, multifaceted community, variety of choice. Its pleasures were obvious.

This was the assessment of Irvine by architect, historian and resident, Alan Hess, back a couple years ago. The article, at least in part, evoked a city I didn’t really catch a glimpse of. Its pleasures may have been obvious but were fleeting.

Certainly, the views out over the Little League baseball diamonds in the parklands abutting the Irvine Civic Center were fantastic, looking as they were toward the Santa Ana Mountains. 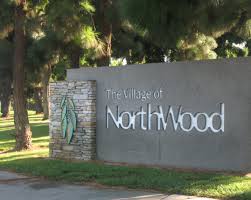 A path between a couple of the fields led to a bike trail running along some sort of culvert, the San Diego Creek, perhaps? There was a bridge across it to a hockey rink, playing Kanye West over the loudspeakers, All of the Lights/All of the Lights.

Without a bike, however, I got back into my car to head off to my next destination, one of the early areas of development in Irvine, although developed independently of the “plan”, Northwood. It was about 6.5 miles away and if I wanted to get there really, really fast, I could, barring any adverse road conditions. In Irvine, there are arterial roads where you can drive between the various “villages” as they’re called, at 55 miles per hour! That’s right. 55 miles per hour. In a city.

That’s not to mention Irvine is cross-sectioned by a couple of major interstate freeways, the 5 and 405, along with a couple lesser ones, the 133 and 261. 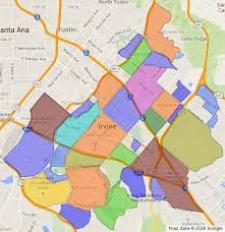 Bringing me to the crux of my discomfort with a planned city based on the primacy of moving people in cars, easily and speedily. I know that concept doesn’t appear stated anywhere. Mr. Hess writes of the “logically planned town organization” with its “superblocks, pedestrian paths, mixed uses, integrated landscaping, public amenities.” From his townhouse, he can walk to a library and grocery store.

So where are all these pedestrians, I wondered, gunning down the street like Sammy Hagar. Could they be tucked away, out of sight, off-road, going about their daily lives? Granted, it was a Monday afternoon, so maybe Irvinites had other things to do aside from just walking around, enjoying the good life. In my travels, I did stop at a park near a schoolyard that was full of kids, and their parents, waiting by their cars to drive them home.

Another detour took me through a couple of these dizzyingly laid-out neighbourhoods where, if you didn’t know your precise destination or lacked a keen sense of direction, could turn you around and have you discombobulated in no time. Interestingly, in one of these neighbourhoods, the streets had no stop signs,

no traditional visual guideposts. It was almost as if I’d stumbled into some secret, magical place of complete streets. With no obvious right of way, no authoritative directions on how to negotiate the streets from behind the wheel, I naturally drove far more cautiously, slowly.

Which left me crawling along empty daytime streets, not quite sure where I was going, rounding every corner in the hopes of catching a glimpse of some speeding traffic on a nearby arterial road where I could reorient myself and collect my bearings.

Having arrived in Irvine, unprepared to take advantage of the natural attractions of the place, the biking, the hiking, I was ultimately left with one thing to do if I was unwilling to go to Newport Beach. Head to the mall. The Spectrum, to be a exact, in the eastern part of town, not far from what will be the Orange County Great Park on the site of the former El Toro Marine Corps Air Station.

As far as malls go, the Spectrum is a nice mall. All open air with most of the familiar franchise shops you’d recognize. There’s a ferris wheel, merry-go-round and train ride around the place. Still. It’s a mall.

It seems to me that as well-intentioned and as well-executed as your planned community or city or neighbourhood is, if it’s planned around the automobile, ultimately, you end up driving to a mall. For all the talk of ‘logically planned town organization’, ‘superblocks’ and mixed uses, Irvine struck me as single-use as any suburban development I’ve been to. Maybe, back in the early days, when Irvine was a town of 50,000 residents, most people could walk to their local library and supermarket. If you live in one of those houses today, maybe you still can.

That’s not what most of the city felt like currently, at least to this outsider. All your recreational needs are within an easy car ride, a longer bike ride, a walk maybe,

if you don’t have anything else planned for the day. The automobile is the key integrative element to any sort of successful flow in Irvine.

The best laid plans will not mask that. No amount of green space will change it. Or will having the best school system in the world.

At some point of time, there will have to be a reckoning. That’s just basic math.