In Praise Of Paul

We spend a lot of time railing here at all Fired Up in the Big Smoke, bitching, if you will, agonizingly over the state of affairs of our local politics. 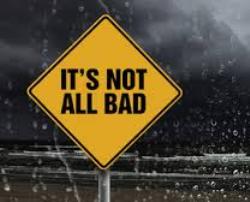 With good reason, I think it fair to add. Things are terrible, from the state of our public transit, public housing to the repute (illin’, in the vernacular of the kids today) of our local governance, and many points in between.

From all that glum, occasionally the positives appear, brightly alight on the dreary canvas of civic/political life of this city like the spring flowers we should expect to see sometime soon if this cold, heartless winter ever ends. We’re told it will. Honest. It has to.

So I’d like to send a shout out today to one of those positives, one of the proofs that Toronto isn’t necessarily going to hell in a hand basket. It is the Easter holiday season, after all. If the dead can rise again, why not the near dead? (Too much?)

At yesterday’s council meeting, he entered the fray of the accountability officers’ debate, putting forth an amendment to a motion that should put the issue to rest at least for a bit, seemingly satisfying a solid majority of the two factions. It was an adept bipartisan move that deflated the hyper-partisanship which had needlessly infected the issue. Such diplomacy, let’s call it, was a far cry from the Paul Ainslie I remember when I first started closely watching City Hall back in the early days of the Ford era.

It struck me then (and I believe with justification) Councillor Ainslie was simply a robotic ‘yes’ vote for whatever crazy idea the Mayor Ford demanded. In fact, I will confess publicly here for the very first time, I had a hand in an obscure Twitter parody account mocking the councillor, mostly for his refusal to get up and defend some of the positions he took. We can all disagree politically, I think it’s safe to say.

Well, OK. I’m not going into the details here but let me say this. If ranked ballots arrive at City Hall for our next municipal election (currently nestled away somewhere in Queen’s Park awaiting provincial approval), Councillor Ainslie should be credited as one of the prime adoptees of the initiative at City Hall in his role as chair of the Government Management Committee. In a time of regressive, backwards thinking embraced by many in the Ford administration, it is a testament to the councillor’s doggedness to the cause that ranked ballots made it through such a mess.

Hopefully when a definitive history is written about Toronto’s city politics from 2010-14, Paul Ainslie’s role in pulling one of the many loose threads of Rob Ford’s ratty, tawdry behaviour will be acknowledged.

A full month before the crack story broke, it was Councillor Ainslie going public about Ford’s drunken, loutish appearance at the Garrison Ball that really teed the ball up for the messy, ugly fall that followed. Few of the mayor’s supporters had broken ranks with him yet. This was big news at the time that got lost in the ensuing crack story.

The Fords, of course, denied it. They wrote the claim off as just bitterness on the part of Councillor Ainslie for not getting the nod as the budget chief to succeed Mike Del Grande. A few months later, they booted Ainslie from his post as chair of Government Management in a display of what spite was really about.

Let me just say here that while there is no need to point out the Ford’s unfamiliarity with the truth, the notion Ainslie, I don’t know, used the incident to get back at them is sort of laughable. Having chatted with the councillor on a few occasions, I have to say, the man comes across as lacking as little guile as I have seen in any other adult I know. You have to have a little bit of the sharp elbows in you to be successful in politics and Ainslie’s city councillor origin story is not without controversy but if there is a more genuine politician at City Hall right now, I haven’t spoken to them. 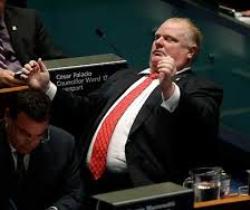 The feud between Ainslie and the Fords escalated especially when the councillor reversed course on the Scarborough subway extension. Initially supporting the move, he said after looking at all the information that the numbers simply didn’t add up. He was the lone Scarborough councillor to speak out and vote against scrapping the LRT which led to a series of robocalls being placed by the mayor to residents of Ainslie’s Ward 43, a subsequent complaint to the Integrity Commissioner by Ainslie and yet another apology from Rob Ford.

Compare and contrast the principled stand on the issue made by Paul Ainslie with the complete and utter cowering capitulation and 180 made by Glenn De Baeremaeker.

What was really interesting about yesterday’s accountability office motion by Councillor Ainslie wasn’t so much that he made it, and made it stick. There’s every reason to believe that the original motion of Councillor Stephen Holyday’s wasn’t going to pass, so ill-thought out and deliberately divisive as it was.

It was Councillor Ainslie’s response in defending it to some critics who thought the original motion should just be killed outright.

“I’m not trying to salvage it [Holyday’s motion],” the councillor tweeted. “If we defeat it outright it will only leave too much on the table with an axe to grind.”

Ainslie wasn’t aiming at the motion. He was going after those behind it who had ‘an axe to grind’ with the accountability officers and, for their own mysterious reasons, were determined to reduce oversight of city council despite any protestations they made to the contrary. A more thorough review of the offices (as opposed to the very narrow, amalgamation-orientated one asked by Councillor Holyday) would better arm accountability proponents for future attacks.

I understand why councillors like Shelley Carroll opposed any sort of review. It is unnecessary and floats the idea that there’s something amiss with the accountability offices when the reality is, the only thing wrong is they are all chronically underfunded.

Yet the pipsqueaks on the council, the Stephen Holydays, Michelle Berardinettis, James Pasternaks, Justin Di Cianos and John Campbells were relentless in their fight against the offices. Councillor Paul Ainslie attempted to put an end to their pursuit once and for all, or, maybe even better, expose them for the regressive, anti-democratic types that they are.

For that, and the general all-round geniality and amenability, good natured can-do-ness, we salute Councillor Paul Ainslie. May you find all the easter eggs you search for in the easter egg hunt you will undoubtedly participate in.