“No TV reviews!” our fearless leader shouted as he headed off for the weekend.

“This is a political blog!” he continued yelling on his way down the stairs. “There’s no place for pop culture on a political blog!” His belief is you can’t do both and do both well. “Just read NOW magazine if you don’t believe me.” (Not an opinion shared by everyone around the office.)

But now he’s gone and left me in charge. It’s kind of like tossing your kid the keys to the liquor cabinet as you leave town for the weekend with the warning, And no drinking. (As if your parents never did that.) I know I shouldn’t but it’s almost like a dare. Besides he can’t ground me although there have been times he’s tried.

While away recently up in the wilderness, I seized the opportunity to watch the entire first season of David Simon’s Treme on my hosts’ extremely large HD TV. I was a huge fan of his earlier masterpiece, The Wire, and probably overstayed my welcome in my drive to watch all 10 episode of his latest effort. But it was worth the risk of not ever getting invited back again. Otherwise I was going to have to wait until the show came out on DVD and would have to impose on someone else who owned a DVD player.

Set in post-Katrina New Orleans, Treme follows a diverse cast of characters (a Simon show trademark), from the upper crust who view the disaster as an opportunity to “reshape” the city down through those who have lost everything but their lives.

It is a city at the proverbial crossroads, much of its past washed away — some of it storied, some of it checkered — when the levees broke and facing an uncertain future, caught in a stranglehold of competing visions. The old New Orleans versus the new New Orleans.

I bring this up not to show off my skills as a reviewer, for none do I possess outside of I like it, I like it, I don’t like it (and isn’t one Rob Salem enough, frankly?) It is the politics at work in Treme that I think is interesting and more than a little relevant. Not that I’m in any way trying to equate Toronto’s recent troubles with Hurricane Katrina but there are some interesting parallels.

An outside force beyond the city’s control blows into town and inflicts great damage, both physically and psychologically. In its aftermath, there is a scramble to be the first and loudest to deny responsibility. Victims are criminally mistreated. Those charged to protect and defend, do neither. Once a sense of normalcy returns, there’s the slow realization that nothing’s going to be the same again.

There is a feeling that for those who live in a city, whether its New Orleans or Toronto, events happen in which they have no say. Key decisions that will affect their lives are made without any input asked from them. Cities deal with the consequences and results of actions taken at a distance.

That’s the reality of politics at the municipal level regardless, it seems, where that municipality is. We elect clowns, do-gooders, politicians of the noblest intentions as our local representatives and ultimately it doesn’t matter.

They have no role beyond carrying out the marching orders from those who have seized the true levers of power through a historical process that has remained frozen in amber, impervious to the imperatives of change and adaptation.

A statement of obliviousness and indifference that resonates far beyond the boundaries of Orleans parish.

There are worse things that can happen to candidates running for office than having their campaign manager quit their post part way through the race. An inability to keep it in their pants and commit tawdry details of the proceedings in a text train with a publicity seeking, vindictive mistress might be one way. Especially if it puts you in the sanctimonious crosshairs of a gotcha journalist like the Toronto Star’s Royson James.

Still, the seriousness of a prematurely departing campaign manager cannot be denied. If it weren’t significant, the exit announcement would not be made at 10 pm on a Friday night when thoughts have already turned to the weekend. A weekend chock full of other attention grabbing items. The end of the NHL regular season. Tiger Woods’s return to the golf circuit. 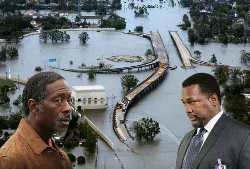 David Simon’s newest contribution to the betterment of television.

Despite the best efforts of the George Smitherman For Mayor team’s attempt to bury the lede, rumours and speculation have been making the rounds regarding Jeff Bangs taking a powder. Talk bubbled up around some animosity existing between Bangs and strategist, Jamie Watt, quickly denied, off course. There’s also been some banter about just too many cooks in the kitchen creating a disjointed, hodgepodge campaign. Or how about this one? As partner at The Pathway Group, a government relations and public affairs firm, Bangs wasn’t prepared for a fulltime commitment this early on in what is a nearly 11 month slog to election day.

Certainly few people are buying the official explanation of Bangs wanting to spend more time with his family. It didn’t seem credible to many ears when Mayor Miller cited it last fall as the reason he would not be seeking a third term and he’d been on the job for 6 years already and was facing another 5 if he won re-election. Bangs was just 3 months or so into a gig that’d be wrapped up well before the end of the year.

Whatever. It appears something ain’t working within the Smitherman team. So much so that it’s thrown the first spanner into the works of what has been, until this point, the anointed front running mayoral campaign. Distant rivals are heartened. Points being scored suggesting that this only proves that Smitherman doesn’t work well with others which is very problematic when it comes to the position of mayor who must forge coalitions to push through their agendas.

That only points out the real crux of the matter from our view. What exactly is the George Smitherman agenda? Three months into the race and we still haven’t the faintest idea why Smitherman wants to be mayor of this city. Now, this is a failing shared by every one of the six leading candidates for the job. That whole vision thing. Nobody’s articulated a clear vision of how they see Toronto growing, prospering and developing under their leadership mantle. To date, it’s been a race from the negative side of the ledger. What they’re going to cut or sell off. Whose asses they’re going to kick. Which David Miller led initiative they’ll scale back on.

More than any of the other candidates (until Rob Ford’s entry into the race), George Smitherman has been all about the bully in the bully pulpit of the mayor’s office, stirring up anti-incumbent fervor. As a campaign strategy, that may work at the provincial or federal levels where races last little than a month.

It’s a discordant tune, however, that begins to grate over the course of three seasons. Eventually, even your most diehard supporters want to plug their ears to block out the unpleasant sound.

Maybe this is one of the reasons reactionary, anti-government platforms haven’t been a wholly successful strategy at the municipal level, weighted down as they are by the unbearable mass of negative energy. Whispers have emerged around Jeff Bangs departure about a possible ideological divide within the Smitherman team. It is a group tilted heavy to the right with Mike Harris/provincial Tory flaks including bag man supreme, fundraiser Ralph Lean Q.C. Perhaps whatever centrist-left wing instincts candidate Smitherman still possesses have awoken and are attempting to flex their atrophied muscles, creating some internal strain within the group.

From an actual progressive P.O.V., however, the differences between a Dalton McGuinty Liberal and the neo-con Conservatives are significantly less than the Liberals would like us to think.

No George, if you want to be mayor, you’re going to have to start telling us why. You can bluster and intimidate until the cows come home, re-arrange the deck chairs on the S.S. Smitherman all you want but, ultimately, you have to inspire us. Give us a reason to vote for you and not just against your opponents. Orchestrate an inspiring score and then maybe you’ll have everyone singing from the same songbook.