Driving Through The Future

“Humans are bad drivers,” Oliver Sachgau writes last weekend in the Toronto Star’s “Driverless cars will shape our lives – if we let them.”

Mr. Sachgau will get no argument from me there. Humans are also quite bad predictors of the future too, says someone who grew up with 1960s picture books that promised us jetpacks by the year 2000. Jetpacks, jetting us off to our long weekends at Disneyuniverse Mars.

I have no doubt driverless technology will be a part of our future. It’s already here, in fact. There are cars driving automatedly among us currently.

It’s just… I have a couple issues with how Mr. Sachgau sees this all playing out.

It’s 7:20 a.m. on a Monday in the not-too-distant future. You wake up, and realize you’ve overslept. It’s a two-hour commute to work, so you call your boss and tell her you’ll start working on the way.

(Woah! Your boss is a her? It must be the future.) 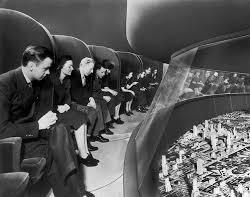 In this scenario, Sachgau’s non-gender specific stand-in lives 2 hours from work. Who the fuck wants a future where you’re commuting — driverlessly or not — 4 hours a day? But I’ll be able to get so much done during that time with something else doing the driving. During Oscar season, I can watch all the nominated films from the comfort of my own back seat!

With driverless cars, in this version of the future everyone is driving everywhere.

For the next two hours, you’re immersed in work as your car takes you to the office. Once you arrive, you’ll order another car to pick up your kids — who’ve hopefully woken up by now — and drive them to school. Another car will pick them up and drive them home in time to have dinner with you.

Just as it was forecast in New York in 1939. The World of Tomorrow.

I don’t doubt driverless cars will make the act of driving better in many, many ways. Safer, smarter, a whole lot less ragey. Maybe. 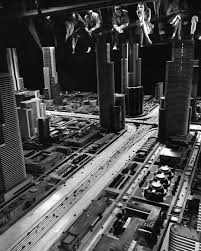 By almost every measure, we are terrible at driving. Our judgement at higher speeds is suspect. We don’t share the roads in any what that doesn’t make congestion worse. We’re so easily distracted.

Yet, this is the one important fact the article steadfastly does not address, most conversations about the future of self-driving cars I’ve heard and read rarely bring up. By making driving easier, more appealing to more people, more people want to drive…more. Induced demand, in other, more succinct words.

If everybody oversleeps and summons a car to take them to work, and everybody is still heading toward the same general area of a region, say, the downtown core, for example, where is all that extra road space going to come from? Has anyone actually done that math? Self-driving cars improve congestion travel times by x%, therefore we will see an increase of car use by y%. Unless the new technology is so vastly superior that it is able to transcend the bounds of induced demand, people are still going to be stuck in traffic, driving or not.

The article dedicates exactly one paragraph to self-driving vehicles and public transit. “Buses and subways might continue to exist,” Sachgau writes, “while people continue to own cars, only now…” wait for it, wait for, “…all of those won’t require drivers.” What does that sentence even mean? 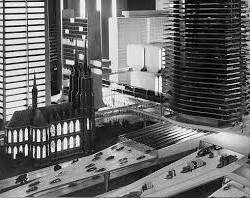 Everything is going to be exactly the same except the cars will drive themselves.

Cities would be better off preparing for driverless technology and public transit rather than making way for driverless cars, the real key word there remains cars, private vehicles, not the driverless part. Sachgau suggests that car ownership might decline, with people realizing the benefits of just hiring them when necessary, like getting to work, getting the kids to school, going shopping, going out to a restaurant, a movie, although that possibility is questioned by an innovation expert at the University of Toronto.

So, it’s easy to imagine a not-too-distant future, when a self-driving car isn’t prohibitively expensive, and the same, if not more, people own one, using it exactly like they use it today, the only difference being, they’re not driving it, but still demanding that cities make the room for them to operate smoothly. Sure, the amount of space dedicated solely to the private automobile will shrink, owing to things like increased safety and less need for parking, making room for other modes of transportation.

But if travelling by car gets easier, cheaper and even more convenient than it is now, cities are still going to be dominated by them. What kind of improvement will that be exactly?

“The tech sector…establishes a reality on the ground before governments and even ordinary citizens even have an opportunity to understand these issues, let alone figure out how they want to deal with them,” according to the innovation expert, David Ticoll, of the Munk School of Global Affairs, who has submitted a report to the city of Toronto addressing the driverless car future.

Ticoll said the city can’t afford to take the same pace when dealing with driverless cars that it has taken with other issues such as the Uber-taxi debate.

We all know how that turned out. Big business played chicken and our local government blinked, essentially rolling over on the red carpet that it had set out for Uber. That was one company. Now imagine a whole bunch of them, all with their own shiny version of a driverless car, wanting to flood our streets with them. Are we really aiming to have everyone spend more time in their cars even if they aren’t driving?

This entry was posted on Tuesday, May 10th, 2016 at 1:16 pm and is filed under City Building, Killer Cars, Municipal Politics, Newspapers, Press coverage, Toronto Star. You can follow any responses to this entry through the RSS 2.0 feed. You can leave a response, or trackback from your own site.

One Response to Driving Through The Future