I tried my best to back off, relax and go oblivious for a couple of weeks during this past holiday season. It was largely successfully, I’d say. I paid scant attention to what was going on around these parts, politically speaking.

But then came these on New Year’s Day from Mayor Tory’s office:

In #TO2015Budget we’ll spend on programs that help you: from child nutrition programs, to youth jobs and better transit.

This year, let’s unlock Toronto’s potential. We are on verge of great things.

Pure calculation rather than inspiration. Bot wishes for the New Year. Thirteen months in office, twenty-four before the next election and Mayor Tory campaigns not governs.

Why not? It seems to be working. A recent Forum Research poll put the mayor’s approval rating at some 75%. Toronto loves the calm, apparently. Familiar words and sentiments stated soothingly.

Ha! This sounds like Rob Ford with the volume turned down. #TOpoli https://t.co/x8Gb9TYCsi

For Mayor John Tory, it’s business as usual but done in a business-like manner. He’s pursuing little change in direction. Just a change in tone.

But will 2016 allow him the luxury of such continued pretense? It’s hard to imagine how. City staff has already presented an unbalanced budget with unfunded liabilities on the operating side including, among other promises, a shortfall for the early Sunday subway opening the mayor has championed. SmartTrack and Scarborough subway reports are coming due with balloon popping possibilities very probable.

There’s the final TCHC report on the $2.6 billion repair backlog from the mayor’s Task Force to come and the new Task Force to look at the Toronto Police Services $1 billion annual budget.

Judging from the mayor’s New Year’s resolutions, he’s totally unprepared and unwilling to realistically face any of these challenges. “On the verge of great things” indeed. Unlocking Toronto’s potential through more wishful thinking and failed ideological posturing.

It’s no longer enough to be content with the idea that, if nothing else, John Tory has chased the clown show from City Hall. In fact, he hasn’t at all. The clown character has simply changed.

Gone is the borscht belt tinged vaudeville act with its hilarious, lowdown slapstick, replaced by a far older tradition. Il Dottorre. The unimaginative pedant who believes himself to be everything he isn’t, a man in love with the sound of his own voice, an obstacle to actual progress.

Mayor Tory believes he can help. He wants to help. 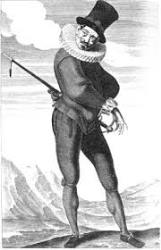 He’s simply incapable of doing so, locked into a mindset that permits little outside opinion that doesn’t confirm what he already believes.

Unfortunately, that may not be enough to move him out of the way. Already, many observers have conceded him 2018, imagining another Ford-Tory showdown with no other candidate daring to split the vote for fear of putting a reinvigorated Rob Ford back into the mayor’s office. Pure bogeyman politics.

So be it. Too early for too much to happen, in my opinion, but, whatever. I’ll leave that strategizing for others more attuned to fret over.

How about instead, we not think about who to replace Tory but what to replace him with? He has no vision aside from plastering over cracks in the foundation. He cannot imagine a Toronto that is not his Toronto, the city that made him all he is. What kind of city do we want this one to be and how can we achieve that? Mayor Tory and the sclerotic band of city councillors who unwaveringly back him either because political expediency, similar paucity of ideas or in the misplaced idea of avoiding the perception of dysfunction, are devoid of vision. They’re suited merely to pushback not push forward.

That creates a governance gap, filled with all that we can’t do not what we can. We’ve got two years to create and enact a viable and inspiring alternative to the current retrenchment too many city councillors (and this mayor) try to pass off as leadership. Prudent, sensible, workable, modest, yaddie, yaddie, yaddie. It’s none of those things.

It’s dereliction and abstention, dressed up in nicer attire.

Mayor Tory and his council colleagues following closely in his footsteps need to run against something in 2018 not someone. We need to start putting that something in place and nail it up on the front doors of City Hall. Toronto is being stymied by the politics of personality. It’s time to offer up the politics of ideas.

This entry was posted on Monday, January 4th, 2016 at 2:19 pm and is filed under City Building, City Council, Municipal Politics, Race 4 Mayor. You can follow any responses to this entry through the RSS 2.0 feed. You can leave a response, or trackback from your own site.

2 Responses to A New Year’s Resolution