Mayor Tory Is A Lawyer, Right? 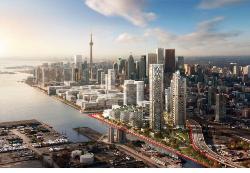 The new development, with a working title of 3C Waterfront, will transform a major portion of the land where the Don River meets Toronto Harbour. 3C Lakeshore Inc., a joint venture by partners Cityzen Development Group, Castlepoint Realty Partners, both of Toronto, and Continental Ventures Realty of New York, will develop the site. The 3C site, positioned between Cherry Street and Lake Shore Boulevard East, is the largest contiguous tract of land on Toronto’s East Bayfront. The project is designed to be a mixed-use urban development adding 2.4 million square feet of residential, commercial, office, retail, and parking space to the waterfront. The overall vision of the project is to expand Toronto’s waterfront to the east by creating a vibrant community space, a gateway to the revitalized Port Lands, and integrating nearby communities into continuous urbanity.

This was written more than 2 years ago, all of which has been thrown into disarray by the sudden appearance of the updated “hybrid” option for the Gardiner east expressway being pushed by Mayor Tory. “We’re this far from settling 3 years of an appeal,” Jane Pepino, a lawyer representing the 3C development group, told the Public Works and Infrastructure Committee a couple weeks ago when she was asked what stage the development application process was at. With zero consultation “and, seemingly, no overlap between those at the city who were working with us and those at the city developing this scheme,” Pepino said, they only found out about the new “hybrid” option at a public meeting just over a month previously.

Mayor Tory will tell anyone who will listen that this was the “hybrid” option he supported during last year’s campaign. The “hybrid” option both his major opponents supported. That’s not the truth. As Ms. Pepino tells Councillor Ron Moeser during her deputation, the original “hybrid” option had “no detrimental impact on the 3C lands” and they “took no position on it”.

This “hybrid” option – let’s call it “hybrid reboot” – “came out of the blue” because of city engineers’ concerns about the original “hybrid” option.

So again we have hastily drawn up lines on a map, erasing years of careful planning.

What do you think is going to happen if city council pushes ahead with the “hybrid reboot” option for the Gardiner east, scuttling years of development planning in the process, on what is perhaps the most valuable land in Toronto? Can you say ‘litigation’? No? How about ‘massive lawsuit’?

When Councillor Joe Mihevc asked Ms. Pepino for a ‘rough ballpark, back of the envelope value’ of the 3C lands, she had a one word answer for him. ‘Huge’.

Where’s the common sense Mayor Tory keeps talking about in unnecessarily risking that?

This entry was posted on Monday, May 25th, 2015 at 11:00 am and is filed under City Building, City Council, Municipal Politics. You can follow any responses to this entry through the RSS 2.0 feed. You can leave a response, or trackback from your own site.

One Response to Mayor Tory Is A Lawyer, Right?