Cycling in Barcelona is not perfect. If the yardstick used to measure that is, say, the Netherlands, and an afternoon two wheel jaunt from Noordwijk to The Hague.

There are moments of perfection certainly on a bike in Barcelona. The ride back down toward the old town along the sequestered lanes running along the Avinguda Diagonal or the middle of the street separation providing a great run on Gran Via de les Corts Catalanes.

Shouldn’t we all have access to bike lanes on an ‘Avinguda’ or a ‘Gran Via’?

But there isn’t an obvious network of bike lanes in Barcelona, at least not to visitors lacking a full knowledge of the city (or maybe even a bike route map). I’m talking an effortless flow from one set of lanes to the other, made easy with robust signage. Bike signing in Barcelona goes from emphatic to non-existent within a matter of blocks, regularly leaving a cyclist directionless at a point in the ride when three different options suddenly become available.

(This doesn’t appear to be exclusively a Barcelona thing as I discovered an hour or so outside the city on a very gentle hillside ride where a path would abruptly end at an impassably rocky incline or a precipitous drop off the side of a cliff into a river some unhealthy kilometres below.)

Back in Barcelona this can mean finding yourself suddenly lurching from a blissful ride taking in the sights to merging into fairly heavy traffic, either motorized or on foot.

This is when you discover, however, just how bike friendly Barcelona is.

Space on both roads and sidewalks is immediately shared.

I’m not sure I heard an angry car horn or any violent ringing of bicycle bells when bikes found their way out of their lanes and onto roads or sidewalks. People simply adjusted. Cars made way for bikes. Bike riders adapted to the pace of the pedestrians they now rode amongst, oftentimes in very narrow, medieval sized street widths. Skateboarders weaved in and out of the crowds. There seemed to me to be a lot of skateboarders in Barcelona. An ancient mode of Catalonian transport, I guess. 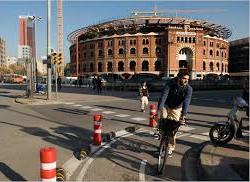 While, I’m sure, not the exact definition of complete streets, it certainly felt like it to these untrained, North American auto-centric eyes where we all jealously guard our designated territory. Roads are for cars, trucks and buses, maybe. Sidewalks given over to pedestrians. Cyclists carve out some in-between space, somewhere, preferably, out of sight and mind. Isn’t there a park or someplace you can do that? Higher order transit all goes underground. To each their own and seldom should there be any overlap.

At a cava stop at a streetside café owned by a former associate of some sort of Moses Znaimer (“He’s so rock’n’roll! Toronto’s so rock’n’roll!!”), I settled in to watch this sense of complete streets. It wasn’t necessarily a wide sidewalk. Parked cars had taken a chunk from some of it. The café had about 6 tables occupying some of the space. Metal balustrades divided the remaining portion of the sidewalk into two lanes as much as they kept larger, motorized vehicles from using it.

A glass or two in, two mothers sat down at the table next to me. One had a wee little baby in a stroller beside her while they split two other children, both in the upper single digits in age. Eight? Nine? My eyes aren’t as good as they used to be.

While the two women conversed over a beer and coffee, the two older kids essentially were left to play in the traffic, the pedestrian traffic. There was some hide-and-go seek, some other game of back-and-forth, up-and-down the street following rules I couldn’t fully grasp. A discarded stick got incorporated at some point of time. When a dad of one of the kids arrived on his non-motorized scooter that immediately became the centre of attention.

The kids went about their business, nobody paying much attention to anything going in and around them. And there was a lot of street action going on around them. No cars, granted, although at one point of time things moved to a driveway directly off the street to some unseen parking spots which brought dad out of his seat to instruct the kids back down away from that area. Still, the sidewalk was hardly a dead zone.

People, big people, strode back and forth. People, families on bikes, a dude taking his dog out for a walk-ride. Skateboarders, of course. Bar staff came in and out of the bar, sometimes with trays of food and drink. Still, the kids played on, not oblivious to what was going on around them but not intimidated by it either.

Just as importantly, the parents seemed to barely take notice, outside of the parameters that parents always notice, are always aware of what their kids are up to at any given moment when there’s even a possibility of harm in the vicinity. There was nothing resembling hyper-vigilance or helicoptering, to slightly paraphrase the term of the moment. The kids were left to their own devices on this little section of busy urban sidewalk.

While there was a big park on the other side of the street across 6 lanes of automobile traffic and a couple officially designated bike lanes, this part of the street was also considered public space, a safe spot for kids to go about the business of being kids while their parents took some time to catch up, chat about this and that, over drinks. It doesn’t have to be green space to be public space.

Not all the time. Not exclusively.

But we aren’t Barcelona, you’ll counter, or Paris or Amsterdam. That’s there. We’re here.

Sure. I won’t argue with that, only to say let’s stop pretending it’s some accident of history that created our separate built forms, our different approaches to how we use our cities, allocate functions to where we do what. It’s a matter of choice not fate, very purposeful decisions that have been made and just as equally can be unmade depending on what we deem to be of importance in how our cities run.

This entry was posted on Friday, May 8th, 2015 at 10:56 am and is filed under Bike lanes, City Building, Municipal Politics, On The Road. You can follow any responses to this entry through the RSS 2.0 feed. You can leave a response, or trackback from your own site.