Don’t get the wrong idea. Los Angeles has not become a car-free mecca. There’s still a love affair going on there between humans and their driving machines.

But there does seem to be something of a change in the air, at least to someone like myself who has not visited the city in nearly 20 years after having lived there for a brief portion of the early 90s. Ah, the early 90s… The early 90s… Nope. I got nothing. You know what they say. If you can remember the 90s…

Back then, you’d never even think of moving to Los Angeles without owning a car. Cycling was pure recreation, done far from the roads, by the sides of concrete rivers and very welcoming and expansive ocean side paths. Public transit? Oh my. Public transit in LA.

From where we lived, the morning commute to the school campus was, on average, about 20 minutes one way by car, barring any sort of natural disaster or riot that was prone to flare up along the way. That very same trip by bus? Usually more than double that time, clocking in at 45 minutes. And if I remember correctly, the bus route that got you there in the most direction fashion stopped running by 7pm.

So seriously. Who’s not going to drive over taking the bus? Pretty much nobody except for those who couldn’t afford the luxury of having a choice.

It’s been a slow grind over the course of the ensuing two decades. Change from such auto-orientation could not possibly happen any quicker. This is LA, after all. The land where dreams of unfettered car ownership, top down, wind in your hair, Beach Boys My Little Deuce Coup, are born.

We’ve got all these freeways, man. Neighbourhoods were destroyed putting them up. We gotta use them.

Still, I have to say the transformation to a less car-dependent place is noticeable even if you’re not really looking for it, I think. For starters, there are buses everywhere, regularly spotted throughout the day even weekend days. Blue buses. Orange buses. Red buses. The occasional green bus.

According to Human Transit’s Jarrett Walker, it was the bolstering up of the bus networks throughout Los Angeles County, especially the MTA’s red beauties, all shiny, all articulated, that kick started LA’s public transit revolution. And I have to tell you, my bus trips on Monday’s Carless in LA outing were not under-used, both a mid-day trip downtown from Santa Monica and the “other” red rocket during rush hour back west along Wilshire Boulevard. Standing room only for a segment of the latter trip and by the time the morning bus ride hit the Santa Monica Freeway, it was hauling at near capacity.

Of course, by their very nature, the long denigrated, lowly buses don’t really grab the headlines when it comes to transit discussions. LA’s got subways, baby. Hey. What world class city doesn’t, am I right?

Two lines, running mostly through the downtown core — Yes, Virginia. There is a downtown Los Angeles. — with one extending right over and up into the San Fernando Valley to North Hollywood. It’s not an extensive network. Barely could be considered much of spine of the system. One gets the feeling it’s something of a Fordian-like sop to keeping transit from taking up precious road space but, hey, it’s not cars.

In actual fact, the real gem of the current transit build in Los Angeles (of course, I may be somewhat biased) is the series of LRT lines it’s put down and continues to extend.

Folks. For the record and despite what has been incorrectly stated again and again and again during Toronto’s ongoing, rage-y transit debate for the past 3 years or so, our city doesn’t have any sort of LRT operating within its system. LRTs are not glorified streetcars. The St. Clair disaster was not perpetrated by any sort of LRT. The Spadina bus was not replaced by an LRT.

Los Angeles has LRTs. Toronto does not.

I only had the opportunity during my ever so brief transit foray to take one of the LRT lines, the Gold Line, running from one terminus in downtown’s East LA and the other, up to the north and back east, in Pasadena.

Two other LRT lines connect to Union Station via subway, one running south down to Long Beach, a second, the Expo line, heads west toward the Pacific, now ending in Culver City but a much needed extension to Santa Monica is slowing inching its way to a 2015/2016 completion date. A 4th light rail line, the very first one built, runs south for about 35 kilometres from downtown-ish to Long Beach, connecting to both the Blue Line LRT and the Silver Line BRT along the way.

You may ask why, if I’m such a big fan of LRTs, I wasn’t all over that map, giving each and every one of those lines a serious test run. Here’s the thing. One, there was only so much time in one day. Secondly, what the LRTs offered to someone such as myself, armed with a $5 day pass and curiosity bordering on obsessiveness, was the ability to hop on and off the train wherever it caught my fancy. With much of it being above ground, you looked out the window and seeing something interesting, off you got.

Which is how we ended up in South Pasadena. Mission Station was situated in what looked to be the main intersection of some quaint little town lifted right out of Frank Capra movie.

Steps off the train, you walked along a street of refurbished buildings now housing bars, coffee and artisanal shops. Or what they used to refer to as Mom & Pops. Huh, I thought. I might’ve missed this had I been travelling underground, heading hell bent to my destination further on.

Of course, transit isn’t built for demanding tourists who want the luxury of sightseeing without the hassle of driving to get there. You build transit in order to efficiently move as many people as possible around a region. Places like Los Angeles have realized relying on the private automobile is not the most effective or healthy way of doing that.

My guide for the day, Ned let’s call him because that’s his name, is a long time Angelino now looking to live a less car-dependent life in LA.

When we first met, back over 20 years ago, such a thing was nothing but a pipe dream. You don’t want to get around by car in Los Angeles? Move to San Francisco.

Now? Not a pipe dream. It isn’t easy, certainly not everywhere, trying to navigate the city without your own four wheels. Parts of Los Angeles remain severely under-serviced by public transit including the affluent west side where recalcitrance to share the roads (both at grade and below) on the part of municipalities like Beverly Hills have left places like UCLA in Westwood isolated from the rest of the city.

Still, this is not the laughably public transit stunted city I remember. While the state as a hole has suffered severe economic blows over the past decade or so. Los Angeles has managed to fund their public transit renaissance. 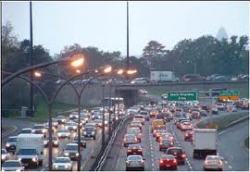 Former mayor Antonio Villaraigosa helped convince a normally tax-averse population to accept a half-cent sales tax increase to fund a 30 year transit expansion. He then took this Measure R to Washington to secure federal loans in order to shrink the 30 year timeline down to the 10. 12 proposed major transit projects in 10 years.

If such a feat can be accomplished in a car-centric city like Los Angeles, what exactly is holding us back here in Toronto?

This entry was posted on Wednesday, February 12th, 2014 at 1:52 pm and is filed under City Building, Killer Cars, Municipal Politics, On The Road. You can follow any responses to this entry through the RSS 2.0 feed. You can leave a response, or trackback from your own site.

7 Responses to Carless In LA