As a Toronto Blue Jays fan, which I assume you are if you’re reading this since we here at All Fired Up in the Big Smoke are the numero uno spot for the latest news, 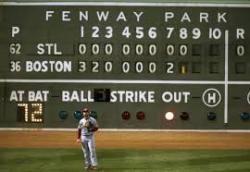 rumours and analysis of all things Jays, last night’s conclusion to the 2013 Major League Baseball season was nothing short of the worst case scenario imaginable way back in the heady days of April.

The much hyped 2013 edition of the Blue Jays were free of any playoff consideration by August, quite possibly earlier if you were really being honest with yourself. The dream of October games for the first time in 20 years once more put to bed early and in brutally ugly fashion. Again, if we’re being totally honest.

The eventual World Series champions turned out to be the much detested Boston Red Sox,

led by a first year manager whose name shall not be mentioned by us here today but who toiled away in Toronto for the previous two years, managing this team almost disinterestedly while waiting, it turns out, for the first opportunity to take his ‘dream job’ in Boston. We were going to show him, that disrespectful so-and-so, with our superstar line-up and big-assed payroll (still less than that of the Red Sox, if that’s any sort of consolation in this dark, dark time).

The best laid plans of mice and sports fans, eh?

If we learn nothing else from following the endeavours of professional athletes, and arguably we shouldn’t, no more than we should learn anything from watching movies, it’s all just empty spectacle at the end of the day, let it be a heaping dose of humility. In any given season, there can only be one winner.

In any given sport, there are an awful lot of people cheering for their respective teams, sides, clubs. You do the math but it pretty much works out to a shitload of disappointment.

I think (and as a baseball fan I’ll admit to some bias in this claim) that his is especially true in baseball. Starting in late-March/early-April and going through until the end of September, teams play almost every day, 162 games in 180 days, give or take. That’s not much down time in between the wins and the losses, the balls and strikes, the hits and the outs. You have to pace yourself. An 8 game losing streak in May isn’t usually as tough to endure as one in September especially if you win a lot of games in between the two.

So the best approach to keeping an even keel is a cautious optimism weighted down with a heavy dose of foreboding.

Expect the worst and hope for the best, as your grandmother might’ve said, blurry-eyed from her fourth rye-and-ginger. If your team can win an average of 6 out of every 10 games during the course of a 162 game schedule, hey, you just might be on your way to (probable) agonizing heartache over post-season baseball in October. Ten teams in. One team wins.

Why the fuck am I talking about this, you just might be asking, especially with all that’s been going on today a little closer to home?

It’s a great philosophy to try and adopt not only as a sports fan but as a way to lead much of our lives.

Or least, get good at fouling them off until a pitch is thrown that you can turn on.

And there will always be next season — until that one time when there isn’t but that’s an entirely different matter – when the prospects for a better run seem brighter. A season when the bad guys don’t win and when hard work and nose-to-the-grindstonedness finally pays off after years, decades of misfortune and frustration. That one shining moment you will want to never end. But, of course, it will, and then it’ll be back to the same routine of winning some and losing some, trying to keep the record closer to .600 than .500.

A sense of equilibrium is what I’m getting at. Not getting too caught up in either the highs or the lows. Just learn to keep your eyes focused on the long game. Everybody’s winning streak eventually comes to an end.

And now we take you back to our regular schedule programming…

This entry was posted on Thursday, October 31st, 2013 at 3:32 pm and is filed under MLB, Sports. You can follow any responses to this entry through the RSS 2.0 feed. You can leave a response, or trackback from your own site.

3 Responses to The World Series