The threads of Mayor Rob Ford’s Toronto are starting to weave together and form a discernible pattern. Like those 3D Magic Eye posters that were all the rage back in the 80s, deciphering what exactly the thing is we’re looking at all depends on your perspective and ability (or willingness) to see behind the white noise. A simple mess of colours to some becomes a distinct shape to others. 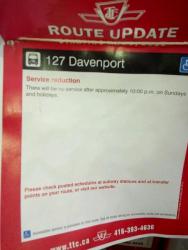 Adam Chaleff-Freudenthaler snapped the above photo and posted it on Twitter last week. ‘Service reduction’ of bus routes should not be confused with ‘major service’ cuts that themselves are different from the No Service Cuts. Guaranteed. pledge Mayor Ford made on the campaign trail last year. Although it might be hard to tell the difference if you’re one of those people who depended on the night time and weekend runs of the 127 Davenport or 33 Forest Hill routes.

Done on the q.t. via posted notice, lost amidst the heavy din of a proposed 10 cent fare increase earlier during the budget process that the mayor and TTC chair Karen Stintz bravely beat back, it is the Ford way. Big noise trumpeting the cutting of taxes or freezing of fees followed by a wee peep of an announcement of a ‘service reduction’. If only a few folks are adversely affected does it really amount to a service cut?

The tree falling in the forest with no one around to hear it and all that.

Some, sensing the way the wind’s blowing in Ford Nation, have decided that the public sector is no longer the place to be. Take Geoff Rathbone, for example. The city’s General Manager of Solid Waste Management Services announced last week that he was stepping down from his post to take up the vice-president position of resource recovery for Progressive Waste Solutions.

Aside from being the 5th city manager to pack up and head out of Dodge since Mayor Ford came to power, Mr. Rathbone’s departure is also more than a little eye-brow raising since one of the last steps he took in his official capacity with the city was to author the report recommending privatizing a portion of Toronto’s garbage collection. His new employer will, in its position as “one of the country’s largest waste management firms,” in all likelihood make a serious bid on the contract that Mr. Rathbone has proposed. Admitting to the National Post that “… the timing of his departure ‘may not be perfect’ but ‘you can’t necessarily choose when opportunities come to you.’” May not be perfect? You think?

That’s not to question Mr. Rathbone’s credentials as he seems well liked and respected by councillors of all political stripes but the idea that this ‘opportunity’ arose coincidentally with the move toward privatization seems a little disingenuous and hard to swallow. While we’re assured the city’s integrity commissioner will keep everything above board, the fact that such a move is even considered legitimate should be of concern.

We’re now outsourcing expertise for the benefit of the private sector with no real guarantee that we’ll see anything in return for it. Note the ever dwindling amount of savings privatizing garbage collection west of Yonge Street will give us. $6 million this week, down from $8 million last week, both wildly off the $49 million in savings claimed in a C.D. Howe report that pro-privatization proponents touted Toronto could save with city wide implementation.

We’re selling the city off by the pound with little benefit to show for it. So, it’s little wonder that managers like Geoff Rathbone are heading for the greener pastures of the private sector (made that much more green with the outsourcing public services). The city’s function will be nothing more than to provide customers for businesses.

The picture comes fully into focus with the news of Mayor Ford’s blank schedule pages. “Previously information had been given out,” said the mayor’s press secretary, [Adrienne Batra], “perhaps too much.” We had complaints in our office too, from citizens who met with mayor wondering ‘Why is my name on a very public calendar?’ So we have to take steps to ensure we protect people’s privacy.”

“Why is my name on a very public calendar?” Perhaps because you’re meeting with the mayor. A mayor who campaigned hard against secretive, backroom deals. Now it’s none of our business who the mayor meets with. So much for accountability and Mayor Ford’s Respect for Taxpayers. All gone the way of No Service Cuts.

The Ford Nation. Reduced expectations, increasingly beholden to private interests and where no questions need be answered. A clear pattern of public de-servicing.

This entry was posted on Monday, May 9th, 2011 at 1:25 pm and is filed under CBC, City Building, Municipal Politics, Newspapers, Press coverage, Privatization, The Globe and Mail, Toronto Star. You can follow any responses to this entry through the RSS 2.0 feed. You can leave a response, or trackback from your own site.

2 Responses to A Pattern Emerges