It’s the last Friday in March so we are going out like a lion with our next installment of Meet A Mayoral Candidate!

This week: Kevin Clarke For Mayor.

For those who’ve been following politics on the local scene here in Toronto over the last 15 years or so, you’re probably familiar with Kevin Clarke. He’s been running for office at every level of government since the mid-90s. 2010 is his 4th stab at becoming mayor of the city.

Is he any more likely to secure the job this time around? Hardly, but that’s not the point. More than any other candidate that we’ve profiled so far, Mr. Clarke is running on what might be called a one issue platform. Although it is a Hydra-like multi-headed, nasty-assed one issue to be sure that is best (or worst) summed up in one word: poverty.

In its simplest form, Kevin Clarke is an advocate for the homeless but his presence in the race is representative of so much more than that. He gives voice to the voiceless; those who have the least stake in the political proceedings and yet who suffer the most dire consequences from the choices that are made. His candidacy seeks to make concrete what many of us only see and deal with in the abstract.

At least, that’s the hope. The reality’s a little more complicated. There are times when Mr. Clarke’s advocacy for the down-and-out of our society comes across as merely political stunting, antics that make him and his fight seem even less relevant. Does getting forcibly removed from a candidates’ debate as he has been help or hinder the cause? Watching some of the impressive amount of footage that exists of Kevin Clarke – he’s even the subject of a recent documentary, Man on a Mission – it’s hard not to think that he`s as much of a self-promoter as he is an activist for the homeless.

Even his biography smacks of a certain manufactured quality. He’s a school teacher turned businessman in the auto sector who wound up spending some 7 years on the streets. So well spoken it strikes you as impossible that this guy couldn’t get his act together and pull himself up and back into being a contributing member of society again. If Kevin Clarke is so hard done by, how does he keep coming up with the $200 needed to run for mayor of the city?

It is at this point that you realize just how firmly ingrained our biases are toward the homeless, the destitute and the sea of misfortune that exists all around us. When forced to face it as we are when someone like Kevin Clarke is on the campaign trail, our shittiest instincts can be revealed. That default switch we’ve developed in order to deal with seemingly intractable social problems: it’s their fault not ours.

Whatever actually motivates him, it`s good that Kevin Clarke’s back at it this time round especially given the heavy tilt to the right that the campaign’s endured so far. The fight`s been almost exclusively about the numbers. Who`s going to cut and save more of them. Who`s going to spend less. 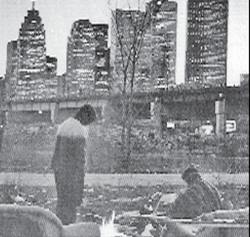 Kevin Clarke is in the race to put a human face to those numbers.  Answering our insipid question we`ve posing to all the mayoral candidates, If the present mayor would like his legacy to be that of the Transit Mayor, how would a Mayor Clarke like to see his legacy written?, we put the words into Kevin Clarke’s mouth. A Mayor Kevin Clarke would make Toronto a better place for all.

This entry was posted on Friday, March 26th, 2010 at 9:19 am and is filed under Elections 2010, Municipal Politics, Press coverage, Race 4 Mayor. You can follow any responses to this entry through the RSS 2.0 feed. You can leave a response, or trackback from your own site.