So the Mayor Rob Ford era has officially begun, and for all those who picked ‘Decorously’ or ‘Graciously’ in the How Will Rob Ford Respond To Having The Chain Of Office Hung Around His Neck office pool, pay up, motherfuckers. 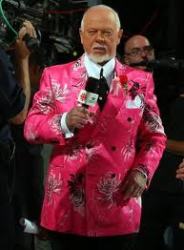 The mayor used the solemn occasion of his investiture to invite one of his heroes, noted Mississaugan urbanist and sartorial flamboyer, Don Cherry, to chain him and kick off the proceedings. Mr. Cherry, in turn, used his invite, as writer Jonathan Goldsbie noted, as “…mostly just an attack on the Globe’s TV critic.” John Doyle, that is, and his article in yesterday’s Globe and Mail. The mayor then followed with an utterly uninspiring speech, full of references to taxpayers and customer service, more befitting (as we have noted numerous times previously) a Walmart manager’s pep talk to his employees just before the grand opening than a new mayor addressing the inaugural council meeting of the country’s largest city. Then some quick business was done like voting in the mayor’s all-male, all-right wing executive committee before the gavel came down to adjourn the proceedings until the real fireworks being tomorrow. 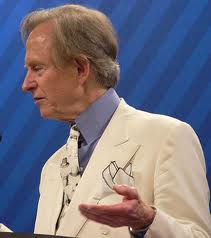 All pronounced while wearing an embroidered pink blazer that would make a geisha blush and his dapper Tom Wolfe high collar. Both men preach the neo-conservative gospel of small government (except for police and military, natch), and both have done alright for themselves, pocketing their fair share of government largesse.

And somehow, pinkos are the bad guys. We left leaning, bike riding, oh-so-privileged, downtown elites, bereft of the common touch and without our finger on the pulse of real Torontonians. We don’t understand the plight of the working people. The mayor does because he employs 350 of them in Toronto, New Jersey and Chicago. Don Cherry talks to millions of them directly through the camera, for a whole 8 minutes every Saturday night. Regular Joes, the two of them. Full fledged members of the lumpen proletariat, they is.

You know what? I say, fuck that. Much discussion has gone on since the new mayor’s been sworn in about how those standing in opposition to him should react. Take the high road. Don’t take the bait. Take a pill and chill-ax. The world’s not coming to an end because the likes of Don Cherry brought his schtick live to City Hall chambers.

All true but we’ve seen this movie before and it never, ever turns out well.

Every time a right wing populist is elected, they claim a ‘mandate’ (sometimes even from as on high as heaven itself) and immediately take the offensive, declaring a state of unilateralism. 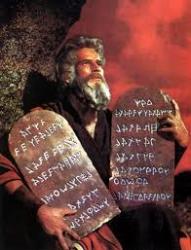 It’s My Way Or The Highway. You’re Either With Us Or A’gin Us. All Hail And Bow Down Before Me, Minions.

We’ve watched it for the past 4 years or so in Ottawa. A minority (A Minority!) Conservative government has browbeaten the opposition into simpering obsequiousness, giving way on almost every important issue that has emerged. Even the stands they’ve managed to take like on the long gun registry have tied them into paroxysms of soul-wrenching angst, leaving them to look defeated in the face of victory.

It’s a tactical strike adopted from right wingers in the States. George W. pulled it off masterfully throughout his term in office. The Tea Party led Republican congress is following suit. Not even sworn in yet and they have a Democratic President turning on his base. To seek bipartisanship where none is on offer doesn’t make you look evenhanded, open-minded or apolitically above the fray. It makes you look weak, unprincipled and unfit to hold public office.

Now comes Rob Ford who has not made one conciliatory gesture to his opponents since being elect mayor. His executive committee is exclusively right-wing, inner suburban (or from wards that Ford won) and male.

He’s been blowing smoke about his power to end Transit City, going as far to say that council never voted about Transit City (it did), so it doesn’t have to be consulted to terminate it. The voters gave him a mandate, you see. Normal democratic principles no longer apply.

Bringing in Don Cherry to introduce him was just another aggressively defiant gesture by Ford. To all those who disdainfully dismiss the outrage that greeted Grapes’ council speech as unimportant, much ado about nothing, an overblown sticks and stones scenario, not worth the media attention, well, you’re diminishing the symbolism of it. “You never know what he’s going to say,” shrugged our mayor about Cherry’s speech. Not the exact words maybe but the intent was going to surprise no one. It was a big ol’ fuck you to anyone and everyone who doesn’t think exactly like the mayor and Don Cherry, pinkos or not.

Imagine if David Miller, re-elected with a larger percentage of the popular vote for his 2nd term, had proclaimed a ‘mandate’ and brought in, say, Naomi Klein to introduce him. She proceeds to say something to the effect of: Eat it, corporate right wing shills. Not political? Unimportant and beside the point? I don’t think so.

Mayor Rob Ford has come out of the gate with no intention of making nice, seeking compromise or trying to find the middle ground with his opponents. Why is the onus on them to reach out? It’s not obstructionist to stand up for your principles and beliefs. It’s called democracy. In a democracy, winning an election is just the 1st step. It doesn’t mean you get to do whatever you want and everyone else has to go along, no matter how much right wingers would like to believe that.