Stepping out onto the front porch last night after the deluge, having beaten back a basement flood that, in retrospect,

looks like nothing more than a big ol’, sloppy wet kiss from an elderly relative, our neighbour across the street told us he hadn’t seen anything like the storm we’d just experienced. In over 40 years since he moved here. Nothing like it.

The numbers seem to back him up. Not this kind of rain since Hurricane Hazel in 1954, and then some. A slow moving storm that just hung around town with an open spigot.

While most certainly thanking the emergency and utility workers and first responders who worked throughout the night to ensure peoples’ safety and restore a sense of normalcy as soon as possible,

let’s also take a moment to express our gratitude to some generations past for having the foresight and generosity to dole out for and build the infrastructure that, decades on, coped admirably. An event many are no longer around to see. Their gift to posterity and all that.

Thanks, grandpa and grandma. How could we ever repay you?

Well, for starters, let’s acknowledge that the aging infrastructure bequeathed to us was not intended to last for an eternity. Like all things, it has a best before date. The least that can be expected of us is adequate upkeep, and the clock is ticking on that.

As yesterday’s storm proves, our infrastructure was not intended to deal with the magnitude unleashed on us. These once-in-a-century storms seem to be insisting on higher frequency visitation patterns. Why, just 8 short years ago the city saw rain it had not seen the likes of since Hurricane Hazel, some 50 years earlier. 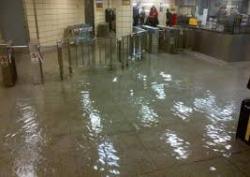 In less than a decade, we topped both.

News has it that one of the city’s pumping stations was unable to keep up with the flow. Undoubtedly, sewage ended up being dumped into the lake. Certainly the city manager Joe Pennachetti was right to say that more things when right than wrong, it’s obvious Toronto will not be able to cope with such extreme weather on any sort of regular basis.

And to hope we won’t be experiencing extreme weather events on any sort of regular basis is purely the realm of Councillor Norm Kelly and his group of Russian scientists.

None of this is a cheap fix. It certainly won’t come through finding efficiencies and cutting taxes. 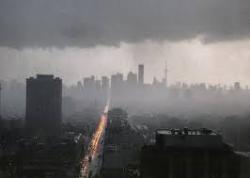 We discovered that when it came time to fund the phantom Sheppard subway.

This is simply a matter of stepping up and taking our turn. Paying it forward, as the movies like to say. Doing our part, just like previous generations, to try and leave the city we live in in better condition than when we first came here. If everybody had been doing it along the way, we wouldn’t now be facing such a daunting task.

Let’s not leave behind a legacy of civic shirking.