(A little change of pace today, for all you oenophiles out there who thought the California wine industry started with Ernest and Julio Gallo. From our Los Angeles correspondent, Ned Teitelbaum, Executive Director of Plant The Vine, an urban landscape history and public memory project intending to create a greater awareness of L.A.’s wine-making past through the establishment of small community vineyards. Viticulture?! Everybody knows L.A. has no culture.)

I had been researching a public-history project about Los Angeles’ first truly dominant industry, that of winegrowing and winemaking, when I realized that I’d been running across quite a lot of what I can only describe as an open and obvious bias against Los Angeles terroir. This bias, which I’ve encountered in conversation as well as in what I’ve read, appears to come from what I’ll call, with a shout-out to Norman Klein (The History of Forgetting: Los Angeles and the Erasure of Memory), a Northern California wine imaginary that views Los Angeles, it’s past as well as its present, through the smoggy lens of its post-war, car-first history.

According to this imaginary – you could also call it a construct or myth — the wine industry left Los Angeles, where it had been ensconced since the days of the Spanish missions, because it had found superior terroir in Sonoma and Napa Valley.

But if the terroir – a French term coming from the word ‘terre’, meaning earth, but more inclusive of climate conditions – was of such inferior quality, how then could Los Angeles have become the center of wine production in California for much of the 19th Century? Yes, the padres at the missions certainly had the benefit of lots of “free” Native American labor. But this wasn’t unique to Los Angeles. The padres in San Francisco had peons too. But no matter how many they had, they still couldn’t get the grapes to mature around the chilly, fog-bound mission by the bay.

In fact, and contrary to the myth, what made Los Angeles a wine-growing Mecca was that it had the perfect terroir for the heat-seeking Spanish varieties brought by the padres from home.

One can imagine how filled with hope these early settlers must have been when they first came upon the hot, dry growing conditions of Los Angeles, so similar to those of places like La Mancha, home of the drought-tolerant Airen grape, which is used for Brandy de Jerez (a version of which was made in copious quantities at L.A. missions); or the sherry-producing areas of Montilla-Moriles, which grows the Pedro Ximenez grape; Xeres, where Palomino Fino thrives, and Malaga, whose Muscat of Alexandria grows to this day at the San Gabriel Mission near the L.A. suburb of Alhambra.

No, there was no problem growing grapes in Los Angeles, and of the finest quality, from what we read in accounts of the time. And yet the myth of inferior terroir persists. Why? One possible explanation is that it is part of a larger story, one that goes back centuries, to the struggle for empire and cultural supremacy between Spain and England. In her book, Empire of Vines: Wine Culture in America, Erica Hannickel points out that viticulture has always been a means of establishing cultural as well as political hegemony over populations and over place. Contemporary examples of this abound. A walk through the vineyards of Sicily reveals a succession of differing viticultural inclinations, each of them tied to a different period of foreign rule. 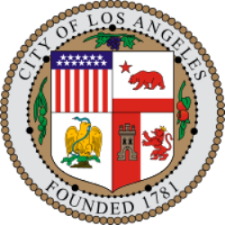 In the former Soviet-Bloc countries, Russian grapes are now being replaced with indigenous varieties. And in drought-plagued areas of California, including L.A. County and Napa and Sonoma, thought is now being given as to the culturally driven wisdom of having planted the thirsty varieties of Bordeaux, Burgundy and the Rhine, when the drought-resistant varieties of southern Spain would certainly have been a more sustainable choice.

So, if it wasn’t the inferiority of the growing conditions that caused the wine industry to abandon Los Angeles, then what was it? A related myth suggests it was because of vineyard blights such as philloxera or Pierce’s disease. But these afflicted Sonoma and Napa as much as any other part of the state. No, the main reason the industry left L.A. was quite simply the city’s growing hunger for land. With the expansion of its port at San Pedro and the arrival of the intercontinental railroad in 1874, Los Angeles was increasingly integrated into the global economy. The vineyards, which occupied choice real estate between the river and the center of town, were sold off for housing and industrial subdivisions. 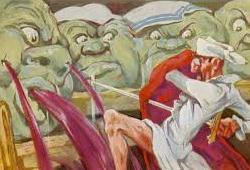 But In the process, a centuries-old, site-specific Spanish viticulture, one that had flourished along the L.A. River for over a hundred years, was destroyed. With the strategic use of the Northern California wine imaginary, it did not take long for it to be erased from memory as well.

The other day, I was down by the river, participating in one of the frequent clean-ups organized by FoLAR (Friends of the Los Angeles River). As we pulled plastic bottles and other detritus from the caked mud and plant life, a refreshing breeze from the San Gabriel Mountains kicked up, passing through the Glendale Narrows and brushing by us on the way to the sea. I sat down under a willow, took off my hat and wiped the sweat from the back of my neck. A red-winged blackbird called out from a nearby cottonwood, and as I tried to decipher its song, the sound of passing cars faded into the background. I looked down-river, toward the city, and let the heat ripples play with my imagination. I thought of Don Quixote and Sancho Panza, that unlikely duo of La Mancha, and became convinced that if they had happened upon Los Angeles in the late 1700s, they might well have felt right at home, pitching their tienda along the river bank and drinking the local version of Brandy de Jerez.

This entry was posted on Friday, August 5th, 2016 at 11:00 am and is filed under City Building, On The Road, To Live And Write in L.A.. You can follow any responses to this entry through the RSS 2.0 feed. You can leave a response, or trackback from your own site.