There does not seem to be an exaggeration too big for Councillor Doug Ford to make, an invention too outlandish, a claim too bogus.

He seems entirely comfortable wearing any of those suits. There’s heightened rhetoric and then there’s Councillor Doug Ford.

As the island airport issue once more pushed its way to the front of the municipal discussion this week, the councillor stood head-and-shoulders above anyone else when it came to outright mendacity. No small feat, given there are masters of that particular trait at play in the debate. But Councillor Ford took it to an entirely different level.

“If we didn’t have Bob Deluce [president of Porter],” the councillor claimed, “there’d be a cornfield out at the airport right now.”

Yes, before Porter Airlines, the islands were little more than an empty wasteland of agriculture. As if that would be a bad thing if it was true.

However, it isn’t. Unless of course we go back to a pre-European settlement era when First Nations people grew their maize. But I’m not even sure that’s true.

There was a-plenty going on over at the spot the airport now occupies on the island. Scan through the photos from the City of Toronto Archives that Jude MacDonald pointed me in the direction of. Ballparks. General stores. Summer cottages. Diving horses. This particular batch of pictures ranging in dates from the late 19th-century to 1944.

It’s not the overwhelming degree of ignorance that has become so grating, it’s the boastful, barker manner in which Councillor Ford so confidently displays it. There’s a shocking degree of pathology at work. It would be funny in its cartoonish quality if it wasn’t so disruptive to the political discourse.

We are headed for yet another knock `em down-drag `em out tussle over the fate of Porter Airlines and, perhaps, the airport itself. 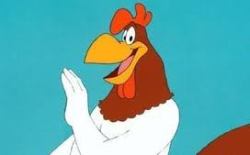 The rhetoric white hot. Councillor Ford has already taken it to another level. His Forghorn Leghorn act skewing the debate into ridiculous territory. Any councillor and other decision maker siding with him needs to do so carefully, in case the dirt of pure hucksterism rubs off onto them.

— I sayly submitted by Cityslikr

This entry was posted on Saturday, April 13th, 2013 at 11:00 am and is filed under City Building, City Council, CommunityAIR, Municipal Politics, Newspapers, Porter Air, Press coverage, Toronto Port Authority. You can follow any responses to this entry through the RSS 2.0 feed. You can leave a response, or trackback from your own site.