If Mayors Ruled The World

While a contingent of Toronto city council watchers fret and wring their hands over the state of our local democracy, I find it tough to get too tied up in knots about what’s been happening here. You want messed up democracy? How about that stable majority government in Ottawa and the sledgehammer passing of C-38? Now, those people should be worried their state of democracy there. [Errrr… Aren’t we ‘those people’? – ed.]

In fact, I’d say in comparing Parliament Hill to our City Hall, we’re doing just fine, thank you very much. Checks and balances are in place. Blind party loyalty is non-existent to any detrimental extent. Councillor Doug Ford might be on his way out!

Even here in Toronto, municipal politics are where it’s at, where the rubber hits the road, according to New York mayor Michael Bloomberg. “We’re [municipalities] the level of government closest to the majority of the world’s people,” Mayor Bloomberg has said.

“While nations talk, but too often drag their heels — cities act.”

So, What If Mayor’s Ruled The World?, asks political scientist Benjamin Barber in the above interview with Richard Florida and in a talk presented to The Long Now Foundation last week in San Francisco. The world might just be a better place, Barber thinks. More equitable. Further along the road toward sustainability. More democratic.

Barber sees cities as places ‘… governed by voluntary cooperation and shared consensus’. Cities are ‘…defined above all else as places of collaboration and pragmatism.’ “Mayors are the most pragmatic and effective of all political leaders because they have to get things done,”
Barber writes. [La-di-da. And then there’s Toronto. – ed.]

Of course, it’s easy to be cynical these days in these parts. Getting things done translates into little more than attempting to roll back almost anything that happened from 2003-2010. Repeal this tax. Kill that transit plan. Not so much a situation of getting things done as it is seeing things undone. At all levels of government right now, that is the new conservative way.

Barber, quoting urban planner Bruce Katz, says, “If you love cities, you’re going to love the 21st-century.” Hold on to your horses, says our mayor and his team who haven’t yet come to terms with the last 30 years of the previous century. 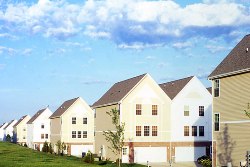 They like living in a permanent state of counter-urbanization as they would call it at Human’s Scribbles. Cars rule. Public transit is for the poor. Children ride bikes. Public space amounts to little more than shopping malls and your backyard when you invite friends over for a BBQ.

But think about this.

As much as we can blame Mayor Ford’s reversal of fortune on his own obstinate bumbling or the coalescing of the opposition into an organized group slowing shaping into a body capable of piecing together an agenda for the city, it also could be that he’s fighting an uphill battle against the march of history. Actual 21st-century urbanization is coming. Some of it’s already here. This isn’t a right-left issue. We’re talking the future versus the past. Our mayor came into office already yesterday’s man.

We really do need to stop comparing Mayor Ford to his predecessor, David Miller. Instead, let’s prop him up next to Miller’s true successor and urban heir, Mississauga’s 91 year-old mayor since 1978, Hazel McCallion. While Toronto’s mayor has made it a point to erase the city of any and all traces of Miller, McCallion has embraced much of Miller’s agenda, including the idea of LRTs and extra municipal taxing powers like the VRT. Mayor McCallion has been front and centre demanding a dedicated regional wide sales tax to building public transit.

“…if you don’t want tax increases,” says McCallion, “you’re not going to get service, it’s as simple as that.”

Times, they are a-changing. Cities must change their ways of going about things in order to adapt and flourish in this, The Urban Age. Even the former Queen of Sprawl recognizes that fact.

And because of the nature of cities, the almost immediate relationship between by-law enacted and by-law in effect, change can happen like that. [Imagine a snapping of fingers. – ed.] Some find this unsettling, even some elected to serve the best interests of the city. That’s the other beauty of city life. We can ward off or mitigate their worst reactionary instincts. It’s happening right now.

That’s why Councillor Doug Ford calls it ‘dysfunctional’ and is thinking of jumping ship. Actual democracy tends to be messy. Autocrats don’t like to get their hands dirty.

Despite appearances to the contrary, I think Toronto’s in pretty good hands right now since those who are adhering to that notion have assumed control of the place.

This entry was posted on Sunday, June 17th, 2012 at 12:00 pm and is filed under City Building, City Council, Municipal Politics, Newspapers, Press coverage, Provincial Politics, The Globe and Mail, The Toronto Sun. You can follow any responses to this entry through the RSS 2.0 feed. You can leave a response, or trackback from your own site.

3 Responses to If Mayors Ruled The World