I am not prone to giddy bursts of optimism. Like most of us here at All Fired Up in the Big Smoke, my predilection tends more in the other direction. Bouts of downward fear and loathing that intersect dangerously often with paranoia. The office windows are almost always open to air out the toxic atmosphere.

But put me in a room full of enthusiastic voting reformers and I am over the moon, Up With People, Schweppes bubbly effervescent, that veritable ant that could move the rubber tree plant. So it was last night at the Oakham House on the Ryerson University campus for a Better Ballots get together, Thinking Ahead to 2014: Taking A Critical Look at Local Elections. 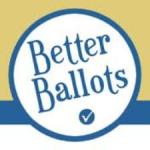 In short, this: Local Choice.

I am a firm believer that the desultory relationship we have with our politics and politicians boils down to one key element. It’s how we vote (or don’t for far too many of us) and elect our representatives. At the federal and provincial levels, the whopping majority of us don’t wind up voting for the ultimate winners. Right now in Ottawa, the party which less than 4 in 10 voters voted for now controls more than 50% of the seats in parliament. Each and every day they enact, pronounce and dictate in matters that a solid majority of Canadians don’t agree with.

That’s not a partisan statement. Here in Ontario, there hasn’t been a provincial government in power that more than 50% of voters cast their ballots for in nearly 75 years! How can that not sour our relationship with those who govern us? Don’t look at me. I didn’t vote for the guy. Yes, I said ‘guy’. Why?

Because in our first past the post system, the status quo is usually maintained. Thus, the continued preponderance of doughy white guys in the corridors of power.

The list is long of ideas to reinvigorate our political process. In townhall gatherings last year, the Better Ballots folks winnowed down suggestions to 14 (pages 18 and 19), ranging from moving election days to weekends, introducing phone and internet voting, municipal parties and term limits. At last night’s session, the emphasis was on 4 areas: ballot or voting structure, extending voting rights to permanent residents, lowering the voting age to 16 and campaign financing.

My particular bailiwick happens to be how we vote. Over the next little while, I’ll be regularly writing on the subject of various voting systems, trying to figure out which one would fit best at our municipal level. The overarching theme will be that the first past the post system has got to go.

Based on the strength of last night’s presentations, lowering the voting age is also very intriguing. William Molls at Voteto16.ca made a highly entertaining and persuasive case.

As did Leonardo Zúñiga of iVote Toronto in talking about extending voting rights to permanent residents. Both ideas couldn’t but help to reinvigorate the political process. The more people don’t have the right vote, the less politicians will feel the need to reach out to them and the less reason these people will be have to actively participate.

Bob MacDermid had the rather unfortunate task of pointing out our continued problems with campaign financing that inevitably favours those with money and those with influential friends with money. Vote Toronto does yeomen’s duty trying to keep on top of this byzantine business but it is a multi-headed monster that constantly shifts and morphs, always to the advantage of those with deep pockets. It seems that vested interests just don’t think that there should be a level playing field in our elections.

Which also explains why it is so hard to change what is so obviously broken. The status quo is a stubborn beast, made even more stolid by those who’ve expertly learned how to work the ref in the game. Any sort of change threatens the standard operating procedure. It is fought tooth and nail.

That’s why more of us have to get involved. Some of these proposals Toronto can enact on its own but others need a provincial go-ahead to happen. That’s two levels of politicians who have won under the current system, so may not be overly enthusiastic to altering something they’ve already mastered. (Hat tip should go out to councillors Shelley Carroll, Josh Matlow and Kristyn Wong-Tam for coming out to the event and showing their support.) Much pressure must be brought to bear to get this conversation going and put the wind in change’s sails.

It is change that is tantalizingly close and many of these ideas are easily implemented if a critical mass can be achieved.

Grab an issue that catches your fancy. Talk to those already involved, see what you can do to chip in and help. If you’re like a majority of Canadians and Torontonians and don’t like the way the game of politics is played, demand change. If we change how we elect our politicians, we may start changing who we elect, and if we change who we elect, there’s every reason to expect we’ll change how politics is played. For the better.

This entry was posted on Thursday, November 24th, 2011 at 2:24 pm and is filed under Better Ballots, City Building, City Council, Electoral Reform, Municipal Politics, Provincial Politics. You can follow any responses to this entry through the RSS 2.0 feed. You can leave a response, or trackback from your own site.