We all know about the Black Block and the burning of a police car during the brief but damage filled riot that broke out on the Saturday of that weekend. How could we not? It was international news.

But equally, and far more sinister, was the conduct of the police force and the shocking assault not just upon peaceful protesters but the very foundation of our democracy before, during and after the summit. Peace, Order and Good Government? All tucked away nice and neatly. Noble sentiments in theory but, come on. This is the post-9/11 real world we’re talking about here, where the idea of “security” trumps all.

Even if the smallest fraction of what was said during the 2 days of hearings last week were true (and there’s absolutely no reason so far offered why I would assume there wasn’t far larger degree of truth being told), we should already be knee deep in some sort of public inquiry. 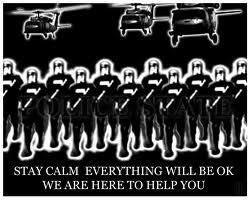 Pre-summit arrests of various social activists. Police going badgeless (therefore nameless) while conducting highly questionable tactics with dubious claims of legality. Onerous bail conditions set on some detainees afterwards that suggest we’re dealing with the most nefarious of Al-Qaida suspects. Even in the pages of one of our more hawkish right wing dailies, there was a tentative call for a public inquiry.

And yet, to date all 3 levels of government have merely shrugged their shoulders. Whaddayagonnado? A few bad apples. Dock a day’s pay. Let’s move on. Nothing to see here.

In other words, people, go fuck yourself.

It’s almost as if we’re asking for a favour. A special dispensation handed down from on high. An indulgence granted by parliamentary privilege.

Like we have no say whatsoever in how our governments and, by extension, those they oversee like police forces operate.

In his National Post piece above, writer Chris Selley asserts “Most people trust the police, and in general they should.” It’s his statement’s ‘in general’ qualifier that stands out. Shouldn’t we trust the police implicitly? Given the powers vested in them to, when deemed necessary, intrude into our private lives and personal freedoms, shouldn’t we demand full and open accountability at all times? Democracy and freedom are easy when neither’s being tested. The real measure happens when they come under duress. That’s exactly what happened at the G20 summit and by all accounts we failed them both miserably. It might be beneficial to try and figure out why.

Unless of course we don’t ultimately care. I mean, how often do we host G20 summits anyway? Police crackdowns are hardly ever necessary in the grand scheme of things.  It’s not like the security cameras remain up or lists are kept to monitor future activities. Right?

Yet for some reason, the ultimate villain in Mr. Selley’s article is Naomi Klein. Naomi Klein? Wait, how did she become—Oh right.

Whenever criticizing the police, however mildly, don’t forget to raise the specter of a “radical” bogeyman, just so readers will remember what or whom the police are up against. In this case, outspoken lefty Naomi Klein who had the gall to praise student rioters in the UK for smashing up the 1st floor of Conservative Party headquarters to protest yet another hike in university tuition fees breaking a promise made when the coalition government was formed.

Why are we more tentative in our criticisms of some displays of lawlessness than we are of others? In fact, shouldn’t we be much more vigilant in guarding against allegations of illegality conducted under the auspices of those entrusted to uphold the law?

Doesn’t that present a much bigger threat to our civil society than the violent outbursts of citizens driven to such desperate acts because of oppression, neglect or ongoing and systemic disregard by those we elect to serve our interests?

No matter how sympathetic I may be to a cause that results in violent protest – and I think a democracy takes Tearing Up Some Shit off the table at its peril – I fully expect those who participate in such actions to be ultimately held responsible for their actions. Arrest and prosecution, all in proper legal fashion. Why is it so difficult to expect the exact same process for our police, its leadership and our own? It’s a dangerous double-standard and one we imperil our way of life with if we continue to hold it.

This entry was posted on Monday, November 15th, 2010 at 1:25 pm and is filed under G20, Law, Press coverage. You can follow any responses to this entry through the RSS 2.0 feed. You can leave a response, or trackback from your own site.

One Response to When Governments Shrug