Who’s In Charge Here? Ain’t You?

I don’t even know how to begin this post.

The degree of disregard for the truth and our Constitution, the full on dissemination of disinformation and outright lies, the abject contempt in which all levels of the public service involved in the operations of the G20 have held the citizens of this city goes beyond unbelievable or mind-boggling. There’s not a word at my disposal that I can summon to adequately describe the degree of shock, dismay and increasing outrage welling up inside of me.

But, allow me to try.

There. I feel a little better. A little.

On Friday, we learn of a secret provincial cabinet shuffle of a 71 year-old wartime law that would allow security personnel at the G20 meeting to detain and lockup anyone who got within 5 metres of the perimeter “fence” and did not properly identify themselves. Done and done. Police willingly oblige, nabbing the unsuspecting here and there, sometimes far and away from the 5 metre line of demarcation. Upon learning about this, a sizeable chunk of the population reacts with the appropriate degree of Unmistainappallindignoustionflimflamfuckery.

Then yesterday reports emerge that, in fact, there was no such 5 metre outside the fence rule as part of the Liberal government’s tinkering with the Public Works Protection Act. According to the Canadian Press, when asked if there was an actual 5 metre zone as part of the Act, “…Chief Bill Blair smiled and said, “No, but I was trying to keep the criminals out.” This came in response to an aide for Community Safety Minister, Rick Bartolucci, insistence that “There were no extra powers granted to police for G20. As we stated repeatedly the regulation was about defining property, not police power.” Of course, when copies of the Act started making the rounds on the interwebs it was there, apparently, in black and white for all to see that, in fact, there was a 5 metre zone outside the fence.

DESIGNATED PLACES REFERRED TO IN PARAGRAPH 2 OF SECTION 1

1. The area, within the area described in Schedule 1, that is within five metres of a line drawn as follows: … blah, blah, blah, layers upon layers of lies and bullshit.

But news reports this morning inform us that, no, there never was such a law in place. The police made it up and arrested people on a whim, in a classic example of the ends justifying the means. Now most certainly, the already insanely large bill for hosting the G20 will be added to, as we’ll be paying out compensation for all sorts of illegalities carried out by security forces in order to, as the law-interpreting police chief says, “keep criminals out.”

It would be bad enough if we could just chalk all this up to gross incompetence and massive hazy acquaintance with the facts on the part of our fearless leaders. But nobody can be that stupid or gormless in the face of such intensive public scrutiny not even a representative of the cabinet of Premier Dalton McGuinty.

There is something much more sinister and responsibility defying at work here.

This is intentional muddying of the waters, a multi-leveled hot potato buck passing conducted for the sole purpose of avoiding accountability by everyone involved. A deliberate creation of a big ol’ wall of confusion so opaque in its Byzantinism that it will be near impossible to uncover even the most basic facts of who knew/did what, when. All in the hopes of people just getting fed up and walking away in disgust, demanding nothing more than to be left alone so they can enjoy their upcoming summer vacation.

And civic political engagement dies just a little more, replaced by a crippling cynicism that only helps perpetuate a lawlessness and indifference to democratic principles by those we elect and appoint to uphold those very things. How dare we try to suggest that the only criminals in this whole sad, sordid affair were those who threw rocks and set police cars on fire. They are property vandals. 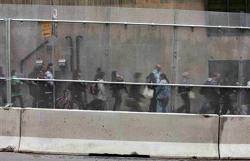 What we’re talking about here is nothing short of the theft and undermining of our fundamental rights and freedoms that are part of living in an open society. That, I think, is the much bigger, more disturbing crime.

It’s enough to make you want to yell unmistainappallindignoustionflimflamfuckery!!! over and over again until the neighbours start banging on the ceiling, telling you to shut up.

This entry was posted on Wednesday, June 30th, 2010 at 10:23 am and is filed under G20, Law, Press coverage, Provincial Politics, Public Works Protection Act. You can follow any responses to this entry through the RSS 2.0 feed. You can leave a response, or trackback from your own site.

6 Responses to Who’s In Charge Here? Ain’t You?