Not Your Grandaddy’s Conservatism

(Hey ho, people. Listen up. An auspicious Sunday as we introduce a guest contributor to All Fired Up in the Big Smoke, Sol Chrom. Not only is he an occasional commenter here but he’s also been known to blog over at Posterous, tumblr and OpenFile. A busy, busy man. So we are honoured to have him appear with us. Hopefully the first of many.)

I’ve tried to avoid the easy snark in reaction to Doug Ford’s musings about turning what’s left of Toronto’s waterfront into a megamall-themed, monorail-adorned, Ferris-wheel-festooned amusement park. It doesn’t do any good to get all riled up and turn into indignant sputtering caricatures of Left-Wing Kooks every time Brother Doug has a brain fart.

But it turns out it wasn’t just a brain fart. Turns out it was something that arose out of a series of private meetings with real estate developers and mall operators. Isn’t this very much like the corruption and backroom dealing Councillor Rob Ford used to rail against and promised to do away with if he was elected mayor? You know, transparency and respect for taxpayers and all that?

There’s not much point in spending a lot of detail on the obvious political arguments. “Who the hell does this guy think he is?” is the easy question. He doesn’t have the mandate to singlehandedly tear up years of planning and consultation, flushing millions of tax dollars down the drain. 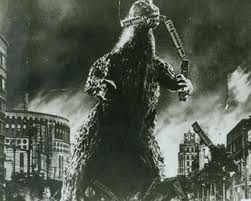 An easy criticism, and not likely to dissuade anything.

It’s also pretty easy to point out that pawning off capital assets in a one-time fire sale in a half-assed effort to make up an operating deficit isn’t exactly prudent management. Weren’t these guys supposed to be the antidote to years of socialist fiscal ineptitude?

One could also ask why this is getting fast-tracked to Executive Committee, but again − easy question. That’s how this bunch operates. Spring it on us with almost no warning and give us less than a week to absorb and discuss. No surprise there either.

No. There’s a much larger and more overarching issue here: whence this pathological compulsion to tear things apart? First Transit City, and now this? Years of planning, study, consultation, remediation, standard-setting, consensus-building, and Team Ford wants to attack it with sledgehammers, tear it to shreds, and set fire to it – and for what? How does this benefit the public? There’s got to be something deeper and more disturbing here than mere impatience with process or the childish desire for payback against David Miller and the nefarious downtown elites.

Once again, it’s worth taking a step back and trying to view this in a larger historical context. While I’m usually reluctant to categorize things in terms of labels, I’m willing to make an exception here, if only because on the surface there seems to be such a correlation between people who identify as “conservative” and support for Team Ford.

But is there? An open letter to the city’s Executive Committee from the Greater Toronto Civic Action Alliance is urging caution on the Port Lands proposals for pretty much the same reasons: it’s not prudent to make wholesale and irrevocable changes to a large body of existing work and tear up years of planning without undertaking a rigorous and transparent process of public consultation:

The proposed changes to be discussed at your next meeting are very significant, are not well understood and were not the subject of any substantive debate or discussion in the last municipal election campaign.

Despite the imprimatur of noted local Trotskyite John Tory, this doesn’t sound like wild-eyed revolutionary zeal; it sounds more like an attempt to stop it, or at least slow it down.

Back to the historical context. In the late 18th century, the French Revolution was reverberating throughout Europe. The established social and political order was facing its most fundamental challenge since the Protestant Reformation. In England, the statesman and orator Edmund Burke was reflecting upon the French Revolution: I cannot conceive how any man can have brought himself to that pitch of presumption, to consider his country as nothing but carte blanche, upon which he may scribble whatever he pleases.

Remind you of anyone?

Burke’s words resonate here because he’s frequently cited as one of the fathers of modern conservatism. It’s worth taking some time here to reflect upon the meaning of the word; to the extent that I understand it, it carries connotations of care, civility, preservation of tradition, honouring the most worthwhile aspects of our collective past, learning from our mistakes, and trying to leave things as clean and orderly as possible for the people who come after us. It means identifying and retaining the best parts of our history and the lessons it’s taught us. We have a body of intellectual and political tradition that’s been cultivated and developed over decades, over generations, over centuries even.

Sweeping it all away with a dismissive wave of the arm is not the hallmark of responsible or careful governance.

You don’t have to identify as a conservative to acknowledge that it’s an honourable tradition – one that’s stood the test of time and has much to teach us. In that light, it’s hard to see the Ford “plans” for the waterfront as anything but antithetical to genuine conservatism.

So where is this coming from? Given what we’ve seen from this bunch, I fear that it’s not “conservatism” as we understand it at all, but something more sinister: atavistic autocratic bullshit, aided by a sophomorically gleeful narrative encouraging the bull-in-the-china-shop approach because … well, just because. It’s not an ideology or a collection of ideas and tradition at all. It’s rule by fiat. Might makes right. We’re doing this because we have money and power and you don’t, so step out of the way, peasant. We don’t even have to pretend this makes sense from a financial or infrastructural point of view, and we don’t have to address your insolent questions.

When was it that people used to act this way? Oh, that’s right. Medieval times. Or perhaps under the feudal system.

It’s not as if this started with Team Ford. It’s just particularly blatant because it’s served up with such an overwhelming air of triumphalism and belligerent ignorance. It’s not a pleasant realization, but the first step in confronting it is recognizing it for what it is.

As the Civic Action letter makes clear, this is going to have ramifications that go well beyond the mandate of the Ford administration and its successors. Screw this up and the damage could be irreparable. Executive Committee members and city councillors contemplating whether to get on board should keep this in mind.

(To read the original post Team Ford goes Godzilla on the waterfront: this ain’t your grandpa’s conservatism in its entirety, click here.)

This entry was posted on Sunday, September 4th, 2011 at 12:50 pm and is filed under Budget, CBC, City Building, City Council, Municipal Politics, Newspapers, Press coverage, The Globe and Mail. You can follow any responses to this entry through the RSS 2.0 feed. You can leave a response, or trackback from your own site.

2 Responses to Not Your Grandaddy’s Conservatism