A Transit State Of Mind

As Los Angeles prepares to push another sales tax initiative to raise $120 billion for a massive 40 year expansion of its transit and transportation system, it is not without contention. 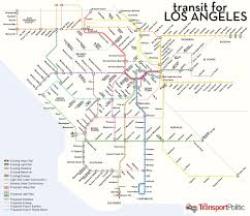 There’s the usual stuff, like who gets what and when, the best use of money on the proper technology, i.e. bus, light rail, subway, will this really help relieve congestion. Nothing other jurisdictions haven’t had to deal with in one way and at one time or another.

But 20 years in to this massive and ongoing project, there are some L.A. specific quirks to the proceedings.

Take, for example, the fact that some of the existing transit lines here were built on abandoned freight track beds, the old streetcar tracks from a once vibrant system back in the day having been ripped up, their routes paved over by some of today’s urban freeways, as local legend has it, meaning I heard somebody say it or read it somewhere, Reyner Banham probably, and couldn’t be bothered to do any research to see if it was true. Using the old freight corridors made the new transit lines less expensive. Also, and again I’m guessing here, it kept the new transit projects from competing for actual road space, thereby reducing conflict with car drivers except when they had to wait at level street crossings for the trains to pass.

One of the consequences of building transit lines in old freight corridors was pointed out by Gene Maddaus in LA Weekly a couple weeks back.

“Those freight lines were generally designed to serve industrial areas and to avoid commercial centers,” Maddaus writes. “This explains why they sometimes run just out of reach of vibrant and walkable shopping districts.” New, more transit friendly development doesn’t magically appear when new transit is built. Until it (or if it ever) does, ridership may not meet projections, congestion may not be relieved, leading to existential questions about the very viability of transit, blah, blah, blah.

I bring this up not to engage directly with the debate, put transit where it’ll take immediately versus build it and they will come, not that there’s necessarily an either-or to that equation, just the best use of limited resources and all that. I raise it as a long-winded introduction to my Tale of Transit Travel This Week: Part They Put A Bus Stop Here?! 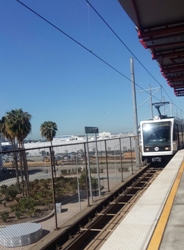 through or near communities like Hawthorne, Crenshaw, Compton, Lakewood, before ending in Norwalk. It is almost entirely an elevated LRT except when it runs along the median of Interstate 105. The Green Line connects with 2 other rapid transit lines, the Blue and Silver which both connect passengers to Long Beach and San Pedro to the south, respectively, and downtown and beyond to the north.

I arrived at the Aviation/LAX station a little earlier than expected, and looking to kill some time, found myself pretty much in the middle of nowhere. That’s not exactly true. You could see a residential neighbourhood not far from the platform, a midrise apartment building going up right across the street. The airport runways were just over there. The 105-405 freeway interchange sat above me in the opposite direction. Grab a coffee and a breakfast burrito? Not so much. So I just reloaded my transit card instead and looked at the station art.

Three bus lines stop at this particular station. There are certainly surrounding neighbourhoods to provide a walk-up ridership although, I did tell you there were 2 freeways nearby plus all your airport service roads, right? So it’s not exactly a pleasant morning stroll to the train.

Not that anyone’s arguing every transit station has to be a destination. Networks and systems are going to have spots that work as nothing more than stops along the way.

It’s that end, and that end, this hub and that one, that determine the necessity for a particular line or route. Besides, there’s something significant and symbolic about riding transit right in the teeth of the very symbol of car culture, the freeway.

But this was just a prelude to the real fun and excitement. Four stops on, I hop off at the Harbor Freeway station to make my connection to the Silver Rapid Bus Line. Yep, the 110 freeway, running from San Pedro, north to downtown Los Angeles and on to Pasadena. Uh huh. The LRT connects to a bus in the middle of a highway, a busy, busy highway.

My first thought was, where the hell am I? This is where I get off? You have to walk along the platform which is above the freeway, and down a set of stairs to the bus stop.

The overwhelming sensation that hits you is, it’s loud. Fucking loud. I don’t know, the overhang of the station catches the noise from the train departing and all the cars racing by below you. You actually have to shout to be heard. It’s unpleasant.

The bus stop is even more disorienting. At the bottom of the stairs, you wind up right smack dab in the middle of a busy expressway, cars whipping by you in both directions. Sure, you’re pretty well protected but still. How often have you found yourself standing in the middle of a highway, waiting for a bus? Moreover, how exactly do you promote development around this rapid transit stop?

I know, I know. It’s bus rapid transit, just a bus, but do not doubt the rapid part, at least not along this highway stretch. The Silver Line runs a more local service in San Pedro and through downtown, but on the 110 and 10 past downtown out to El Monte where it ends? You fly.

Like a bus with Sandra Bullock in the driver’s seat.

I really should’ve kept time but we moved nearly 12 miles (including a couple stops) in what seemed like minutes, 15, 20? We certainly passed cars, stuck in traffic as they were, riding in our dedicated bus lane. It was fast. While you regular Greyhound users may not be impressed, this is a blast to someone who’s spent an inordinate time on city buses over the past 3 months or so.

Never mind the joy such a ride brings to a transit tourist like I am. How about the vital role in providing true mobility to those who really need it? It may not be pretty. It may not be particularly flashy. But there’s a real sense of empowerment, looking out of the window of a bus, traveling uncontested along the freeway, zipping past cars bogged down in congested traffic. 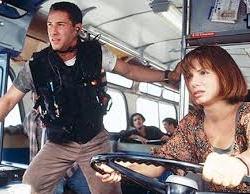 It shouldn’t simply be boiled down to delivering the biggest bang for the buck. Serving up a consistent, even if only brief, boost of, I don’t know, fun and sense of unimpeded forward motion can go a long way to encouraging transit users to believe that their time matters and that the city isn’t always designed as an obstacle to them getting on with their lives.