Where I am in west Los Angeles, there are 5 arterial east-west (more or less) thoroughfares within a quickish bike ride or a lengthier walk.

Wilshire Boulevard above, Santa Monica, Olympic, Pico and Venice boulevards below. All are 6 to 8 lanes wide, give or take, depending on parking restrictions and turning lanes. The stretch of the Santa Monica Boulevard I’m thinking about here, in fact, has a service road running along the side of it, access for numerous residential side streets.

While all 5 boulevards have very distinctly different vibes, the one common thing they share is speed. These are fast roads, with very few “natural” breaks in car traffic. The posted speed limit signs I’ve seen put it at 35 miles per hour. That’s 56 kilometre an hour metric and frankly, my sense so far, standing at the side of these roads, wondering if I have to retreat the one or two country blocks to the closest traffic light in order to cross the street, the speed limits aren’t rigorously or regularly enforced. To the naked eye of a very vulnerable pedestrian, many of these cars and trucks zipping by are moving at low-end freeways speeds, 10, 15 miles over the limit.

In other words, these aren’t places you want to spend much time if you’re not behind the wheel of a motorized vehicle. 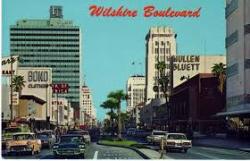 Based on how quickly drivers race along these roads, it’s obvious no one wants to linger very long. The design is to keep people moving. Nothing to see here.

Which is what they were designed to do, these types of automobile boulevards. You can imagine as the city mushroomed west to the coast, these roads being constructed to facilitate hasty flight from the interior to the real California dream of sunsets, beach, the ocean. Corridors between communities, as writers much more knowledgeable about the city than I am, have referred to them.

All fine. That was/is the intent. The limits of those designs are now certainly being tested.

But I stood on the sidewalks of these roads and wondered to myself, Why bother? Why waste money on the cement to lay these down when clearly pedestrians really aren’t that welcome?

Any sort of non-driving along much of this terrain seems like an unwanted imposition. You could put in more parking spots instead, maybe widen the road for another lane of car traffic because, as we know, that always speeds things up.

A couple of these streets, Santa Monica and Venice, have, interestingly, painted out some bike lanes and sharrows in a nod to the city’s surprisingly embryonic cycling scene. Welcome, cyclists. Share our roads.

Now, in Toronto, I consider myself something of a brazen cyclist. Not courier brazen but I generally ride with little fear for my life. I helmet up and proceed under the assumption I will get from point A to point B alive. 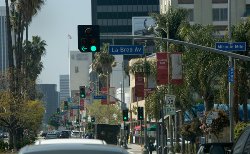 On my first outing here in Los Angeles this week, I quickly realized I wasn’t at all prepared to share the road with vehicles travelling at excessive speeds, fleeing up on to sidewalks, against every instinct in my body except for that survival one. Not that there wasn’t lots of room for me to do so. What’s that joke about suburban bike lanes? They’re called sidewalks.

As a pedestrian or cyclist, in this epicentre of car-centricity, you might concede the main thoroughfares to vehicular traffic. What’s done is done, and it’s going to take a lot more than painted bike lanes or a sidewalk café to realign the transportation hierarchy here. Leave the seismic shifts to the geological realm. (I will abandon the earthquake references in due time.)

The problem with speed, as I’m experiencing it so far in Los Angeles, is that it spills over. Drivers don’t suddenly become law-abiding when they turn off onto residential streets. In this neck of the woods on the westside, north and south of Wilshire, the neighbourhood roads are quite wide, allowing for ample parking and increased speeds. So you don’t go out for a leisurely walk or bike ride. You are constantly on guard, on your toes. Drivers seem surprised to encounter you standing at the crosswalk, ready to interrupt their customary rolling stop.

Making my way from the beach ride at Venice the other day, heading for an off-road path taking me inland to Culver City, I cut in from the bike lane on Washington Boulevard for what I thought to be a more leisurely glide through Marina Del Rey. Imagine my surprise to find curving roads past condos, apartment buildings, hotels and restaurants with a 40 mile per hour speed limit. 64 fucking kilometres an hour! No bike lanes.

Sidewalks inaccessible due to construction.

It was my mistake. There was a bike path that I missed by deking off the main road early and didn’t find until a few minutes later but it did give me the opportunity to wonder why on earth the speed limit was so high on this road. People lived here. Tourists came to stay, to eat. The water was right there with boats floating in it. What was the fucking rush?

A deliberate strategy to keep people from (ma)lingering? If you have business here, tend to it. Then, on your way. Nothing to see here.

Remember that scene in The Big Lebowski (not promising I’ll let go of those references any time soon), when the Dude is picked up in Malibu, carless? He’s unceremoniously sent packing in a cab, after taking a coffee mug to the head thrown by the police chief, and told never to show his face in Malibu again. Without a car, you’re immediately suspect.

Perhaps, I’m reading too much into it, searching too hard for some anti-socialness in it all. But I’m going to revel, at least for a while, in the irony of the possibility that this thing, the automobile, the great leveller and democratizer, the vehicle of freedom, can also be used to exert a certain community exclusivity. You don’t need gates to keep people out. Just vehicles, travelling at lethal speeds, to serve up your unwelcome notice.