OK, not technically an ode, not even an Irregular one. No stanzas, no rhyme scheme.

Just a tribute, if you will.

Standing, listening to music this past weekend at the Toronto Urban Roots Festival, down on the grounds of ol’ Fort York, I was struck regularly by the terrible beauty that is the Gardiner Expressway. The elevated portion of the monstrosity snaking its way through the downtown core, separating the fort from its barracks and the lakefront; modernity, once shadowing out the past, itself now under siege by the present and future as towers rise up on either side of it.

Even more so than this 18th-century fort, it’s the Gardiner Expressway that now looks and feels out of place, out of touch, a relic from a bygone era. An obstinate obstacle to progress, demanding we acknowledge its one-time greatness and how it represented glorious future-thinking and city-building. 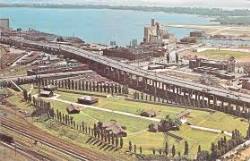 A money-suck monument to the past.

During this never-ending debate over what to do with this eastern most portion of the expressway – Repair, Rebuild or Tear Down, in short – I’ve sided, rather forcefully, with the latter. Bring the fucker down, I say. But on this day, from this vantage point I’m looking up at it, I reconsider.

Maybe not, I think.

Let’s leave it up, as a symbol to prior civic mistakes. Well-meaning but ultimately misguided public policy pursuits that reverberate, decades on, with unfortunate unintended consequences. An artefact in an outdoor museum to grand plans of yesteryear gone wildly and madly astray.

Eventually, vehicular usage on the expressway will dwindle, a smattering of what it once was as people figure there are better ways to move around the city. Maybe we will then turn it into some kind of public space, some sort of reclamation project. 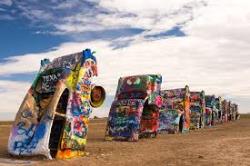 A graveyard for the automobile age upon which we will all ascend to dance upon.

Or maybe, once we come to our senses about the albatross that is the Gardiner expressway, we will plan a grand send off for it, a command performance of the Pixies, say, blasting their planet of sound from the grounds of the ol’ Fort York, LOUDquietLOUD, bringing the entire hideous structure tumbling down. And we will all cheer, not ruefully or spitefully but humbly, acknowledging folly isn’t always avoidable, refusing to accept it as such is.