Driving in the Age of Distraction

(Another post from our All Fired Up in the Big Smoke Los Angeles correspondent, Ned Teitelbaum, in a series we’ve taken to calling, To Live and Drive in L.A.)

Even as the Jeep Grand Cherokee ploughed into the back of my car, I remember wondering if this could be payback for the time I myself had rear-ended someone about a year earlier. But that was in slower traffic, in Venice, and not, as was this, somewhere near Encino, south on a 12-lane superhighway known as the Ventura 101.

The driver who hit me was doing about 50, and though I was wearing my seatbelt, the impact was enough to give me a concussion, some herniated disks and a broken tooth. Still, by today’s standards, this was just a banal traffic accident.

No explosions, no deaths, not even any road rage.

The young tattooed driver who folks tell me was obviously texting apologized for, well, tattooing me. Yet I was confused. Weren’t young people giving up their cars so that they could stay connected to their mobile devices? I’d seen the phenomenon myself, on trains and buses and walking down Wilshire Boulevard. Maybe this guy just hadn’t received the memo. Or maybe it was because LA’s rail network hadn’t yet reached this deep into the San Fernando Valley, a part of the city which grew into its current form based on the primacy of the private automobile. And in fact here, as well as in other parts of our far-flung urban arrangement, distracted driving is still the norm. Which is how it came about that I was introduced to my new friend.

I can’t remember his name. All I remember were his tattoos. And the apologies. Because in the end it really was just an accident. 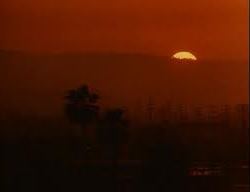 It could have happened to anybody. Like the one I caused last year (no one was hurt). Or the one 10 years before that, in which I had a head-on collision with another distracted driver in another out-sized SUV (I was hurt, but survived to drive another day).

I guess these traffic accidents are just part of life, the price of doing business in a town that decided decades ago to embrace the automobile to the exclusion of all other forms of mobility. The chiropractor I am seeing says I should mend in a few weeks. Will I mend all the way? He doesn’t answer me. He tells me to relax, cracks my neck and sends me on my way.

City Building, Municipal Politics, On The Road, To Live And Drive in L.A. | Tagged: Ned Teitelbaum |