In the back of my mind, I’ve always viewed the word ‘supercilious’ as onomatopoeic, sounding just like it means. Silly. 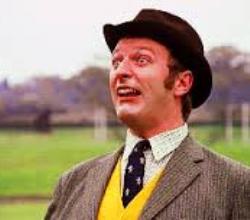 That’s incorrect, I know. And frankly, I think it’s a waste of a very good word. There are far, far better ones at our disposal that give meaning to the notion of arrogance or disdain or contemptuousness. In fact, I prefer those three even to supercilious. How about, lordly, imperious, uppish? You fucking toff.

When I watch our mayor in operation, I immediately think ‘supercilious’ but in my definition of it. He doesn’t project competence or a depth of understanding on any particular issue, just enough to string together a bunch of words on the topic at hand. Words and sentences that, when added up, seldom amount to much meaning of anything in particular.

Look at me, mommie! I’m mayor of Toronto! Stop being silly, Jonathon. Go wash up for dinner. Silly. Super silly.

Listening to Mayor Tory’s take on the Gardiner east removal/hybrid debate, and I’m all like, supercilious. The guy’s a mile wide and an inch deep. He actually has no ability to see more than 10 minutes ahead.

He cannot conceive of a future that isn’t almost exactly like the present which has changed little from the past.

Yes, he talks and talks of the challenges of change, the need to adapt but only based on immutable principles firmly anchored in a tradition, a tradition, not coincidentally, that favours people like John Tory.

John Tory cannot imagine a time when car drivers might be further inconvenienced for the sake of simply building and developing a less auto-centric city. It makes no impression upon him that it happened before, right here in Toronto, 15 years ago when another eastern portion of the Gardiner Expressway was removed with little of the deleteriously overwrought fall out he’s now so concerned happening this time. This time. Never mind the evidence from other cities around the world that removed entire expressways and none burned to the ground because of it. This is Toronto. Things are different here.

At a Ryerson City Building Institute forum last night, Mayor Tory also came down against the idea of extending the municipal vote to permanent residents who live in the city.

“Tory said citizenship brings with it privileges and responsibilities and he has long advocated keeping voting as one of those privileges,” David Rider of the Toronto Star writes. As it was in the days of Noah, so it will be in the days of the Son of Man, am I right?

When asked by the mayor of Ajax, Steve Parish, if permanent resident voting might help diversify a city council’s make up, our mayor shrugged, couldn’t see how. Teach `em how to get elected, Mayor Tory countered, teach `em how to fundraise. Money makes the world go around, am I right?

It is a view where the status quo can only be challenged by embracing the status quo even tighter. Besides, do you really want to challenge the status quo? It’s done perfectly right by John Tory. We just need to all be more like John Tory, united around a bulging rolodex.

So with the more pressing aspects of running the city left largely untouched (not to mention unchallenged), Mayor Tory busies himself with the appearance of being a serious agent of change, stumping for relaxed rules for food truck vending around the city and the taxi app, Uber. See? Who’s disruptive now?

This guy, that’s who.

But the truth is, I wouldn’t be far off the mark describing Mayor Tory with the correct usage of that word. He is proving himself to be contemptuous of facts that don’t coalesce with his very rigid view of the world, how they city should run. There’s a certain arrogance reflected in ignoring contrary evidence. His is the privileged disdain of change that could challenge the privileged position he is accustomed to, that he was born into, that he doesn’t believe exists because he can’t see it.

Yeah. Supercilious. Actually, I think it fits quite nicely.