So we took in a game at Comerica Park last week, and I can safely say this without fear of any serious rebuttal. Detroit has a far better baseball stadium than Toronto does. 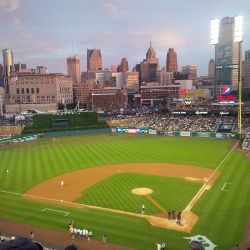 It’s the kind of park where you don’t even need a good team playing at it to want to go see every game. Just sit there, admiring your surroundings, soaking up baseball.

As for the rest of Detroit?

Well, we’ve all heard the stories. A city in decline. A city in distress. A city in a death spiral. “Detroit bankruptcy judge angrily tosses hold-out creditor’s charges,” screams one latest headline.

One thing did surprise me during our brief stay. The amount of work and restoration being done, at least in the downtown core. Sure, there were a number of eerily abandoned buildings, some old beauties from a more prosperous time. But it didn’t feel like any sort of impending collapse, certainly not in the small areas we made it to.

They were even digging up Woodward Avenue, the All-American Road, Automotive Heritage Trail, 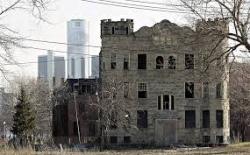 running through the middle of downtown, to lay down the track for an LRT. How’s that for some symbolism, eh? In the Motor City, cars give way to trains.

Hopefully, it’s a sign that Detroit isn’t dying, it’s just changing, adapting. The city that was built by cars, built for cars, was nearly killed by cars. Wounded, but not mortally so.

Of course, cars are hardly the sole factor in the city’s woes, just like cars weren’t the only factor in the city’s rise. Detroit was an established transportation and manufacturing hub before Henry Ford set up shop there. But arguably, Detroit’s golden age mirrored the rise of the automobile. 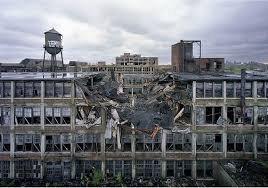 I am hardly equipped to talk about the factors which coalesced to reverse the city’s fortunes over the past half-century or so, only it was a combination ultimately unique to Detroit. There were certainly overlaps with other rust belt cities situated in and around the Great Lakes but few places have suffered exactly the way Detroit has. No one set rules for revitalization or rejuvenation can apply to two separate places.

So I view dimly any politician evoking the civic dissolution spectre of Detroit when they invariably are trying to roll back public sector spending or the wages and benefits of city workers. We have to reduce our reliance on debt or else, Detroit. We must contract out public services or else, Detroit. Stand up to lazy union fat cats or else, Detroit.

Toronto can learn valuable lessons from Detroit but probably not the ones Detroit fear-mongerers try to push on us.

While we here in Canada proudly imagine ourselves, I don’t know, post-racial or, at least, not paralyzed by racial tensions and class war, we really need to check the reality of that stance. No, we have not experienced the kind of open fissure the United States has, manifest in what we’re witnessing in Ferguson, Missouri at the moment. A major cause of Detroit’s current troubles is the white flight that picked up steam during the 1960s riots, drawing stark lines, racially and economically.

Toronto is far from immune from those dynamics. It’s true, the city was never hollowed out like we see in many major American cities. 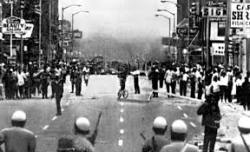 However, almost the reverse has occurred here. Our core is vibrant, gentrified, well-serviced and expensive. Our older suburbs, however, in the former municipalities like Scarborough, York, Etobicoke, have not kept pace. Here is where you’ll find the not so hidden face of Toronto’s racial and economic divide. New Canadians, many visible minorities, put down roots in these places where it’s less expensive and, unsurprisingly, less served with things like reliable public transit and public amenities such as libraries and community centres.

Our inequality starts here. If there’s one lesson we should learn from Detroit, it’s that no city can truly prosper or achieve its full potential when it’s hobbled by inequality.

Auto dependence is not sustainable.

While the city of Detroit’s population has shrunk dramatically, down over 50% since 1970, the region itself has remained relatively stable at around the 5 million mark. It is, essentially, a small downtown core surrounded by sprawl. Such reliance on private vehicle use has scarred significant portions of the core streetscapes with freeways, both elevated and at grade, carving up the urban space. Surface parking lots, many of them sitting largely empty even mid-afternoon on a Tuesday, take up big tracts of the downtown area, oftentimes, located right beside elegantly designed parking garages.

You don’t get a sense of much street life besides on game nights. Detroit has been dubbed Hockeytown (among other things) and its hockey arena is mostly car accessible. The stunted People Mover monorail that stops across the street isn’t much of a feeder system. It’s hard to imagine many people lingering around the area either before or after games.

Detroit cannot rebuild being what it once was, the Motor City.

Detroit also cannot rebuild if it’s sacrificed in the endgame of neoliberal politics intent on diminishing what remains of the public good.

For every corrupt politician making out like a bandit at the trough (and Detroit has had its share of those), there’s their counterpart determined to make the city a private playground for those who can afford it. Sell off public utilities. Pick off public sector pensions. De-unionize and privatize it all. Public transit? We don’t need no stinkin’ public transit.

Marvelling at the collection at the Detroit Institute of Arts, I was informed by a staff member that it wasn’t going anywhere anytime soon, referencing the estimated $1 billion value of the art works now being circled by vultures looking to pick the bones clean.

Beware the politicians who fail to see the good in the public good. They will starve it and then auction off what’s left to the highest bidder.

Toronto has its problems, there’s no denying that. Few of them, however, bear much similarity to those facing Detroit. Learn from the ones that do and ignore anyone touting the ones that don’t.