Problems Of The Cities

(I was reading Intractable Democracy, a book commemorating “Fifty Years of Community-Based Planning” from the Pratt Center for Community Development when I came across a speech, titled “Problems of the Cities”, from Bobby Kennedy. He delivered it to a Senate subcommittee in August 1966 at a time when many U.S. cities where literally burning from the anger generated by racism, poverty and inequality.

Aside from the obvious parallels to what’s happening currently in Ferguson, Missouri, I thought it worth reprinting an excerpt from the speech for the observations Kennedy made about the nature of cities in general. The root problems that still bedevil us today, nearly 50 years on, stemming from a misguided and almost exclusively top-down built form. The specific outcomes may differ somewhat between, say, Toronto and most U.S. cities, but the results are largely the same. A devalued and deracinated sense of community.) 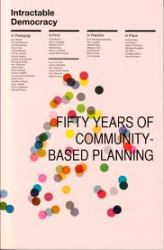 .. To say that the city is a central problem of American life is simply to know that increasingly the cities are American Life.

.. Within a very few years, 80% of all Americans will live in cities — the great majority of them In concentrations like those which stretch from Boston to Washington, and outward from Chicago and Los Angeles and San Francisco and St. Louis. The cities are the nerve system of economic life for the entire nation, and for much of the world.

Everywhere men and women crowd into cities in search of employment, a decent living, the company of their fellows, and the excitement and stimulation of urban Iife. Yet each of our cities is now also the seat of nearly all the problems of American life: poverty and race hatred, Interrupted education and stunted lives, and the other ills of the new urban nation – congestion and filth, danger and purposelessness, which afflict all but the very rich and the very lucky.

What should we expect from our cities? A great historian of urban life, Lewis Mumford, has written: “What makes the city in fact one is the common interest in justice and the common aim, that of pursuing the good life.” He drew in turn upon Aristotle, who wrote that the city “should be such as may enable the Inhabitants to live at once temperately and liberally in the enjoyment of leisure.” If we add the objective of rewarding and satisfying work, we have a goal worthy of the effort and work of this entire generation of Americans.

Therefore the city is not just housing and stores. It is not just education and employment, parks and theaters, banks and shops. It is a place where men should be able to live in dignity and security and harmony, where the great achievements of modern civilization and the ageless pleasures afforded by natural beauty should be available to all.

If this is what we want — and this is what we must want if men are to be free for that “pursuit of happiness” which was the earliest promise of the American nation — we will need more than poverty programs, housing programs, and employment programs, although we will need all of these. We will need an outpouring of imagination, ingenuity, discipline, and hard work unmatched since the first adventurers set out to conquer the wilderness. For the problem is the largest we have ever known. And we confront an urban wilderness more formidable and resistant and in some ways more frightening than the wilderness faced by the pilgrims or the pioneers.

The beginning of action is to understand the problem. We know riots are a problem. We know that poverty is a problem. But underneath these problems and all the others are a series of converging forces which rip at the fabric of life in the American city.

By city we mean not just downtown, or the central city, but the whole vast sprawling organism, covering dozens of communities and crossing state lines. It is not a political unit, but a living social and economic body, extending into suburbs and beyond into tens of thousands of outlying acres, to be covered all too soon with homes and shops and factories.

One great problem is sheer growth which crowds people into slums, thrusts suburbs out over the countryside, burdens to the breaking point all our old ways of thought and action — our systems of transport and water supply and education, and our means of raising money to these vital services.

A second is destruction of the physical environment, stripping people of contact with sun and fresh air, clean rivers, grass, and trees — condemning them to a life among stone and concrete, neon lights and an endless flow of automobiles. This happens not only in the central city, but in the very suburbs where people once fled to find nature. “There is no police so effectlve,” said Emerson, “as a good hill and a wide pasture where the boys can dispose of their superfluous strength and spirits.” We cannot restore the pastures but we must provide a chance to enjoy nature, a chance for recreation, for pleasure and for some restoration of that essential dimension of human existence which flows only from man’s contact with the natural world around him.

A third is the increasing difficulty of transportation, adding concealed, unpaid hours to the workweek; removing men from the social and cultural amenities that are the heart of the city; sending destructive swarms of automobiles across the city, leaving behind them a band of concrete and a poisoned atmosphere. And sometimes — as in Watts — our surrender to the automobile has so crippled public transport that thousands literally cannot afford to go to work elsewhere in the city.

A fourth destructive force is the concentrated poverty and racial tension of the urban ghetto, a problem so vast that the barest recital of its symptoms is profoundly shocking. Segregation is becoming the governing rule. Washington is only the most prominent example of a city which has become overwhelmingly Negro as whites move to the suburbs; many other cities are moving along the same road. For example, Chicago, which, if present trends continue, will be over 50 percent Negro by 1975. The ghettoes of Harlem and Southside and Watts are cities in themselves, areas of as many as 350,000 people.

Fifth is both cause and consequence of all the rest. It is the destruction of the sense, and often the fact, of community, of human dialogue, the thousand invisible strands of common experience and purpose, affection and respect which tie men to their fellows. It is expressed in such words as community, neighbourhood, civic pride, friendship. It provides the life sustaining force of human warmth, of security among others, and a sense of one’s own human significance in the accepted association and companionship of others.

The Values of Community

We all share things as fellow citizens, fellow members of the American nation. As important as that sharing is, nations or great cities are too huge to provide the values of community. Community demands a place where people can see and know each other, where children can play and adults work together and join in the pleasures and responsibilities of the pace where they live. The whole history of the human race, until today, has been the history of community. Yet this is disappearing, and disappearing at a time when its sustaining strength is badly needed. For other values which once gave strength for the daily battle of life are also being eroded. The widening gap between the experience of the generations in a rapidly changing world has weakened the ties of family; children grow up in a world of experience and culture their parents never knew. The world beyond the neighborhood has become more impersonal and abstract. Industry and great cities, conflicts between nations and the conquests of science move relentlessly forward, seemingly beyond the reach of individual control or even understanding. It is in this very period that the cities, in their tumbling spread, are obliterating neighborhoods and precincts. Housing units go up, but there is no place for people to walk, for women and their children to meet, for common activities. The place of work is far away through blackened tunnels or over impersonal highways. The doctor and lawyer and government official is often somewhere else and hardly known. In far too many places — in pleasant suburbs as well as city streets — the home is a place to sleep and eat and watch television; but the community is not where we live. We live in many places and so we live nowhere.

Long ago de Tocqueville foresaw the fate of people without community: “Each of them living apart is a stranger to the fate of all the rest his children and his private friends constitute to him the whole of mankind; as for the rest of his fellow citizens, he is close to them, but he sees them not; he touches them but he feels them not. He may be said at any rate to have lost his country.” To the extent this is happening it is the gravest ill of all. For loneliness breeds futility and desperation — and thus it cripples the life of each man and menaces the life of all his fellows.