An Appointment With Destiny

I get it. It’s supposed to be a mindful, deliberate process, 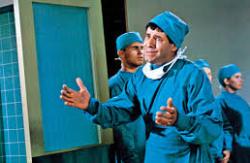 the appointment of an interim city councillor to fill a vacancy left behind when the duly elected councillor resigns the position during a term. The will of voters must be observed and, as best as humanly possible, adhered to.

But wouldn’t it be great if everybody threw caution to the wind and instead took a flyer on protocol and just said: This one’s a real crackerjack. Came in, gave a blockbuster of a speech, has a dynamite CV. Here, Ward [Whatever], try this one on for size. Especially this late in the term. What harm could an appointed councillor possibly do in a few short months?

Alas, no. Order (or whatever passes for order at Toronto’s City Hall these days)

So it was yesterday (as it was last year with replacement of Doug Holyday) with the appointment of new councillors in Wards 5 and 20. No fireworks. Very little surprise or suspense. Just a quiet passing of the torch to caretakers, essentially, until the start of the next term in December, to a couple of established figures. Ward 20 got a long time city staffer and social activist while a political backroomer on the south Etobicoke scene became the new Ward 5 councillor.

The only bit of intrigue during the procedure – no, wait. There were two. – came when a couple former staffers applied for the position of Ward 5 councillor. One, Nico Fidani-Diker, worked in Mayor Rob Ford’s office for a time and is on record expressing some reservations about the role Sandro Lisi played in the mayor’s life. Totally coincidentally, I’m sure, there were problems with the clock in the council chambers during his deputation which he felt got cut short by the speaker, Frances Nunziata.

The other was the fate of Kinga Surma, an ex-assistant in the former city Ward 5 councillor, Peter Milczyn’s office up until last year’s provincial by-election when she went to work on the campaign of Milczyn’s rival in that race, Deputy Mayor Doug Holyday. A supposed amicable arrangement between Mr. Milczyn and Ms. Shurma that didn’t actually wind up that way. She was given her marching orders just a few days after Milczyn returned to the office, having lost the by-election.

Yesterday, she placed a distant 3rd in the appointment race to succeed him, providing a lesson to all political neophytes. Never, ever, publically piss on your boss’s shoes.

Other bosses don’t look kindly on it, and won’t really extend a hand to help, given an opportunity down the road.

Unfazed by the outcome, Ms. Shurma almost immediately registered to run for the Ward 5 council seat in October’s municipal election. It was not an entirely surprising move, and one that may’ve also contributed to her lack of support by an overwhelming majority of councillors who had little interest in giving her a running start in the campaign. Hopefully for Ms. Shurma, democracy won’t be as office politics minded as the appointment process appeared to be.