Who still believes that wildly slashing jobs in the public sector will result in a tenfold increase in the private sector work force? 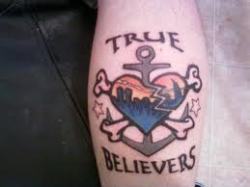 Who still believes in a direct correlation between more and deeper corporate tax cuts and bigger business investments in the economy? Who still believes that an extensive subway system can be built using found money from simple belt tightening and finding efficiencies?

Progressive Conservative voters in Ontario, apparently. And their party leader, Tim Hudak, is making sure they hear him loud and clear early on in this election campaign with his shock and awe, slash and burn announcements. He most certainly isn’t attempting to broaden his base. Just the opposite, in fact. Cement it in place, rock solid.

The reason for that approach is pretty obvious. According to a recent Ipsos Reid poll, Progressive Conservative support is what I’d refer to as intransigent, intractable.

Pollsters more diplomatically call it ‘committed’ or ‘loyal’. 54% of PC voters express an absolute certainty of casting a ballot that way on election day. Only 37% of Liberal supporters think that way. 34% of NDP.

Perhaps even more important to electoral fortunes, of the just over half of people who say that nothing short of a natural disaster or personal emergency will stop them from voting, 42% plan on voting Conservative, 14 and 15% ahead of the Liberals and NDP respectively.

So, get out that conservative vote by stirring up fond memories of the Mike Harris era. Tap into that deep well of anti-government, anti-tax sentiment. Bang the drum of outrage and resentment.

There’s every sort of reason that nearly 73% of those responding to the poll think there needs to be a change of government at Queen’s Park. The Liberals are tired. After 11 years in office, the age spots are showing. There are the scandals, oh my, are there the scandals, and the cover-ups of scandals. There are the half-measures, half-taken, on issues like public transit and the environment. Despite the new leadership, a general sense of entropy permeates the Liberal Party of Ontario.

Kick the bums out!

We’ve seen this movie before.

Hell, it’s playing out right now at a theatre near you.

We don’t have to harken back to darker days of yore.

The attack on the civil service at the federal level is already bearing rotten fruit. A loss of vital statistical information, from household data to climate change, stemming from departmental cuts to overt muzzling of government scientists. A lack of oversight allowing the transportation of dangerous materials in unsafe vehicles resulting in a catastrophic turn of events like Lac Megantic.

In all likelihood, the federal Conservatives will go into next year’s election campaign boasting a budget surplus as proof of how austerity works. This will be a claim made in the face of a less than robust economy with much of the country suffering from severe infrastructure disrepair. Bridges, roads, public transit networks, all underfunded and substandard. And don’t even get me started on our social infrastructure deficit.

Here in Toronto, since 2010 we’ve been living with the results of many of the ‘tough choices’ Tim Hudak insists we have to make. Across the board budget cuts, service reductions, increased state of good repair back log.

All in the name of keeping taxes low and curbing so-called out of control spending.

So this isn’t about some bold leap of faith into the unknown or a change for change’s sake because how much worse could it possibly be? We know how much worse. We’re living it.

Yet, potential Conservative voters are most dogmatic in their attachment to party and intention to go out and vote for them. So either they’re A-OK with the inevitable outcome of Tim Hudak’s austerity measures which is pretty much the opposite of what he claims will happen. Jobs will not be created. Business investment will not increase. Public transit will not be built. These voters don’t care about any of that as long as the Liberals are tossed from office.

Vicious and deluded are the only ways you could describe Conservative supporters at this point.

Combined with the fact that more than 4 out of 5 of them seem to have little intention of questioning that support, they are an immoveable bloc that operates beyond engagement or discourse. An army of obstinacy, offering nothing new or even remotely realistic to the conversation.

The party of spite, less convinced of the worthiness of its own cause than it is the absolute wrongness of the others. Even when they may be right about the latter, the repugnancy at its core offers little to outsiders as a viable alternative. It’s the mathematics of disenchantment and lowered expectations. “Abandon hope, all ye who enter here” has become the Conservative mantra. Our worst is better than their worst.