Conservatives have just given up trying to make any sense, haven’t they. 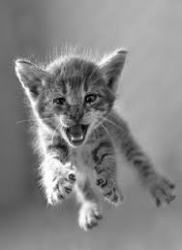 We’ve seen it for a while south of the border but up here they at least tried to make the appearance of seriousness and being thoughtful contributors to civic life and public discourse. Now? They’ve painted themselves into a politically philosophical corner with the only route out to climb the walls in pure barmy loonieness.

Believe us at your peril, folks. We’re making absolutely no fucking sense now.

Take the provincial Tories’ white paper thingie, dropped like a load on us yesterday. Please.

Almost everything any urban thinker suggests not to do to build great cities, Tim Hudak and the gang are wholly embracing. Subways? Everywhere. More Roads? We’d be crazy not to. Sprawl? Fuck yeah.

And they promise to deliver all that (and more) without raising an extra cent in taxes.

Prioritizing. You want to build all those shiny new subways and traffic inducing roads? The money’s going to have to come out of other capital projects. Maybe an aging water main or two bursts here and there every now and then. So be it as long as you can take a subway from Richmond Hill to Mississauga. As we know, capital expenditures are a zero sum game.

There are also plenty of government assets to self off. Did you know that the government of Ontario currently [some number here, pulled completely from context here] which would amount to [another number that only bears tangential relevance to the previous numbers used]? Wow! That’s a lot of money. Almost enough to build a couple subway stations once we’ve eliminated the deficit in x years although by which time today’s dollar figure will build significantly less.

And let’s not forget the private sector. Public-private partnerships. Pensions. Tap into those babies and watch the cash flow.

Exactly the way it happened here in Toronto where, just like our mayor promised back in 2010, we extended the Sheppard subway all the way deep into Scarborough in time for the PanAm games in 2015. As has been shown the world over, the private sector just loves to pay for public infrastructure. If the current Liberal government at Queen’s Park wasn’t so distracted putting out scandal fires, they’d know this.

Not to be outdone on this magical mystery tour, Councillor Doug Ford, evidently with an eye still on a provincial seat in the legislature, has pledged his own brand of fiscal lunacy for today at budget committee. As vice-chair, he’s going to introduce 3 items to amend the staff proposed 2014 operating budget. Knock the property tax increase down from 2.5% to 1.75%. Propose the 5% reduction in the Land Transfer Tax. Knee cap the TTC fare increase.

If I’ve read it right, that’s $18m + $17m + $37m = $72 million the councillor wants to take from the revenue side of the city’s budget. How’s he going to make that up because, as we all know, the operating has to balance. Every year. Even every year before this administration came to power.

It can’t be in service and program cuts because, as we all know, we were guaranteed no service cuts. Guaranteed.

Prioritize. Efficiencies. Fire sale of everything not nailed down. Adjustments and realignments. Everything is on the table except for cuts. Guaranteed.

It’s all bullshit, of course. (I write that a lot when I’m writing about conservative policy). As in every other aspect of our lives that conservatives like to preach to us about, there’s no such thing as a free ride. To try and spin a tale that we can build all our infrastructure needs and provide quality of life assistance to all our residents without it costing us more money individually is nothing but fiction. Cruel, twisted, fanciful fiction.

If conservatives were really being honest, they’d just come out and tell us that we’re not a collective society.

That we’re just an amalgam of individuals, pursuing our own self-interest before all else. That we had everything sorted out just fine back in, say, the 1950s before, you know, everything changed. And if we’re just left to our own devices. If we just keep cutting taxes. If we just keep living where we want to live, driving where we want to drive. If everybody just keeps looking out for number one with little regard for anyone else, everybody will be better off, all of our needs will be met, the streets will be clean and safe, the garbage picked up.

— sleight of handly submitted by Cityslikr