Call Of The Wild

At the airport on the way home, I couldn’t help myself from browsing through the news stand despite carting around more than a few back issues of magazines I was hopelessly months behind on reading.

If a mayor’s truth be told, half the reason I go on these long jaunts is to force myself to play catch up on the stack of periodicals that just keep piling high around me. Compulsory reading time with very few distractions aside from the temptation of a Vince Vaughan movie marathon.

My best intentions suffered a setback when I came across The Monthly with its Montgomery Burns inspired photo of Rupert Murdoch and the wonderful tag line: News Goes Feral. I mean, seriously. How good is that? $9 Australian good is how good.

The accompanying article was a not exhaustive enough take on the deleterious effects on journalism and democracy inflicted by the News Corp/Fox/Murdoch crew, mostly in the UK-USA-Australia axis but with definite ripples elsewhere with populations literate enough to be semi-illiterate.

But the title alone got me to thinking about the political environment back home here in Toronto. Politics Goes Feral. Feral politics.

How better to sum up what’s been going on for the past week, the past 3 years?

Nothing logical or civil. All guttural and brass knuckled. Take no prisoners. It’s about dominance, survival and nothing less than a smoting of rivals. Rivals? Too benign. Vicious foes. Diabolical enemies.

Is there a more apt description of the mayor and his councillor-brother than feral politicians? Bound by no rules or constraints other than looking out for number one, they don’t go for the head or heart. Only the throat. No allegiance or loyalty to anything or anyone not totally dedicated to serving the top dogs’ self-interest. Give-and-take and compromise is for suckers, losers, effete downtown elites still stuck on playing the game the old way,

the way that always gave them a leg up.

It is a feral state of mind more akin to a cancer than wild dogs or cats. Not content to simply roam outside the boundaries of everyday life, picking off whatever scraps they can get their yaps around, they are actually preying on the host, hunting it. Their survival trumps everything.  If the whole thing dies in the process, so be it. No one gets out alive unless everyone does.

The feral Ford line of attack has laid siege to the politics of this city, holding City Hall hostage. The wolves aren’t at the door. We’ve invited them in, hoping to domesticate them so we can eventually pet them.

But given the events of the past week, the past year, the past 3 years, it’s obvious we’re never going to break the Fords of their habit of pissing on the carpet. It’s just what they do. So we have a choice to make. 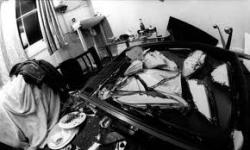 Either get used to the stains on the floor or chuck it out, write off the damage as a lesson learned and move forward with the necessary repair work.

City council has initiated the restoration procedure by turfing the wild ones from the house and restoring some semblance of order. Ignore the howling outside and empty declarations of contrition and promises to be better next time. They only want back inside to resume trashing the place.