The Slow Road To Nowhere

Is there a worse sight to a driver than pulling onto a thoroughfare at little more than a crawl and spotting nothing but a sea of red through the windshield? That promise of personal freedom and wide open roads shattered into twinkling tail lights ahead of you, rendered impossible by every other person behind the wheel of a car who saw the same commercials. 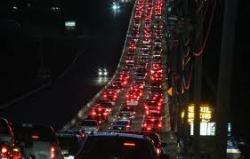 A trip that should take something like 3 hours will now be clocked in at least 50% longer.

The lure of the automobile has taken us further and, if the traffic’s right, faster than back in the olden days. With access to a private vehicle we can now escape the city to more remote places even on just regular two day weekends. On a Sunday evening at the end of a few day run of very summer-like weather during a very unsummer-like summer, though, it shouldn’t be surprising to find yourself slowed by others in their cars thinking the exact same thing: the later in the day I leave, the lighter the traffic will be.

But the thought of a 3 hour ride now dragged out longer kind of kills the calm accumulated by all that time just spent at dockside.

What was truly remarkable about the ride last night, as the Toronto bound traffic “eased” as we eventually made our way closer to the city, congestion around us did not. At 11 p.m., the northbound lanes of the DVP from around Bloor Street were more clogged than the ones heading south. Moving west along the Gardiner and Lakeshore? Forget about it. One giant clusterfuck.

Now there was the CNE just letting out. Lots of construction. Perhaps more weekend subway closures?

Plenty of reasons for such a state of congestion but none more so than a shit-tonne of cars.

We are killing this city with our continued car dependence. There’s no more space to be allotted to further accommodate this mode of tranport. 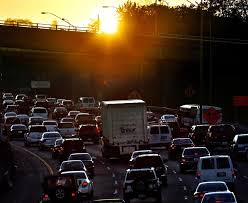 Our decades’ long prioritization of cars over every other means of getting around has brought us to a virtual standstill, at almost any time of the day, any day of the week.

And, based on purely anecdotal evidence from my 4+ hours in the driver’s seat, our car-centric city has made us less social, more antagonistic toward each other even. As we found ourselves waiting motionless with another green light in the distance having turned yellow and then red again along Lakeshore near the Skydome, I joked that maybe some asshole convention had just finished up and was letting out. I lost count of the number of jack-off moves I witnessed around me as drivers’ jockeyed for better positioning to get themselves absolutely nowhere.

Driving brings out the worst in us. Driving in congested traffic reduces us to our basest libertarianism. Everybody for themselves. Co-operation is for suckers. Imma just nudge up there in front of you.

You got a problem with that? What’s with the horn? I’VE GOT MY BLINKER ON, YOU ASSHOLE!!

Why would we continue to design and plan a city that only encourages that kind of behaviour? It’s impossible to imagine how anyone constantly stuck in traffic, not just twice a day during a 5 day work week but whenever they try to get out of town on their days off, doesn’t see the world around them through baleful glasses. They aren’t surrounded by like-minded fellow citizens. Everyone’s an opponent, vying for precious space and time. Social interactions consist of angry denunciations, middle fingers and head-shakingly bad antics.

But maybe that’s just me.

Maybe you get used to it after a while. Shrug it off as all part of living in and around the big city. Maybe it doesn’t eat into your soul every time you press the unlock button and buckle up at the wheel. For some, driving must provide that soothing me-time everyone needs to decompress from the pressures of work and family obligations.

I see little evidence to support that but I’m at a loss to explain why then more people aren’t demanding better alternatives to driving.