Driving out of town along Euclid Avenue, referred to as the Most Beautiful Street in the World back in the day with its Millionaire’s Row 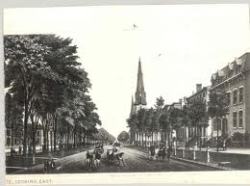 but now along this stretch at least – we were at about Hillsboro Road, I believe – symbolic not of urban blight but flight, houses, apartment buildings, small strip malls, all boarded up, a sign on a street light post said: Buy My House. Cheap. Cash Only. We saw a deer.

“Was that a fucking deer?” Urban Sophisticat asked, unable to confirm for himself as he was at the wheel of the car.

“Nature reclaiming what man took from Her,” 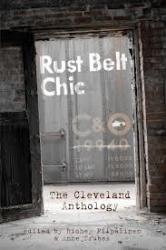 Acaphelgmic mused from the back seat.

Ahhhh, Cleveland, Ohio. Poster child of American manufacturing decline. No, that’s not true. Detroit is the poster child. Even as a symbol of Rust Belt urban decay Cleveland comes second, the runner-up of also rans, the coulda-been-a-contender of washed up never-beens.

That it’s kind of unofficially embraced its sad-sack second class status is also what makes Cleveland endearing. “Cleveland. It’s Not That Bad. Have a Beer,” says one t-shirt. “Burning River Surf Club,” says another, referring to the 1969 fire on the city’s Cuyahoga River. A river. So full of petrochemicals bursts into flames.

“Burn on, big river. Burn on,” sings Acaphlegmic, on a fairly regular basis during our 3 day visit.

The fact is, as we saw for ourselves firsthand this past weekend, there’s much to like about Cleveland. Its downtown remains full of the grand late-19th/early-20th century buildings that went up during the city’s heyday. (American Civil War buff, Acaphlegmic, was especially taken by the Soldiers and Sailors monument that dominates the Public Square where Euclid Avenue begins.) Many are still office buildings. One has been recast as the Horseshow casino.

The Warehouse District just slightly west of downtown has been undergoing slow renewal since the 1990s. Restaurants and bars have moved in. Buildings once owned by the Rockefellers are now advertised as luxury apartments. Both the baseball field and basketball arena sit, literally steps from downtown, drawing in crowds when events are on. The football stadium is about a 15 minute walk, down on the waterfront not far from the Rock and Roll Hall of Fame.

“The Louvre on Lake Erie,” mumbled Urban Sophisticat, probably stealing the phrase from somebody. “Similarly filled with dead artists.” 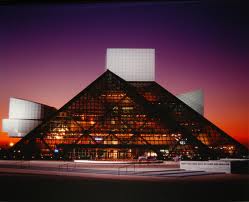 Naturally, this precipitated something of a heated debate with Acaphlegmic. He, after all, had joined us on the trip to attend a Fleetwood Mac concert while we took in the Indians-National game at the ballpark formerly known as Jacobs Field. When asked why on earth he’d do such a thing, Acaphlegmic admitted to a lifelong crush on Christine McVie. “Come on,” he responded to our puzzled looks. “Loving Stevie Nicks was easy.” Clearly, he had not read the fine print and met us later on Saturday night, totally outraged as it turns out McVie has not toured with the band since sometime in the late 90s.

Like the one time mega group of the 70s (watch me try and force feed this into a seamless segue), the city of Cleveland’s refurbishment and rejuvenation feels incomplete. (Ouch!)

There are still too many For Lease signs in office windows throughout the business district. More than a handful of buildings remain empty, not only waiting for tenants but entire overhauls. Aside from the draw of sports and cultural venues, the downtown does not buzz with weekend activity. Cleveland has flashes of potential but is pockmarked by disrepair, decay and abandonment.

While I’m in no position to write of the ill-effects of industrial decline on places like Cleveland,

I will toss in my own totally biased diagnosis of what ails the place as well as standing in the way of its full re-development.

For a place its size, Cleveland is stunningly spread out. The eastern suburbs start a street number countdown in the 490s. Much of the downtown waterfront is intersected by freeways. Wide boulevards run through the core designed almost entirely for automobile use. Parking lots take up space everywhere.

The little construction we did see consisted largely of road building and repair. The I-90 east from Cleveland and almost to the Pennsylvania state line was undergoing an extensive upgrade.

“To help facilitate the drive out of or right through northern fucking Ohio,” 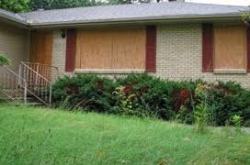 Urban Sophisticat said as we made our way out of the state.

The same infrastructure that enabled us to travel the nearly 500 kilimetres from Toronto to Cleveland in an easy day’s drive has also helped drain the life from the many communities along the way. Heading westward, we hugged the south shore of Lake Erie after crossing the border at Buffalo. In town after town, small main street shops were shuttered. Entire strip mall complexes boarded up and their asphalt parking lots poked full of grass and weeds.

By the time we reached Ohio, it was a landscape dotted with deserted homes, full cemeteries and auto related businesses. Checks Cashed and Oil Changed Here! Erie? Try eerie.

Obviously the problems run much, much deeper than just everyone driving everywhere for everything. But it’s hard to imagine how these places return to any sort of vitality while remaining so auto-dependent. 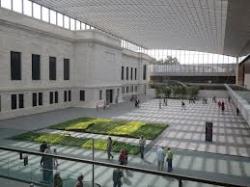 Cleveland itself has a downtown trying to revitalize and then, as you travel east, some 50 blocks of urban despair defined strictly along racial and economic lines running into the next 30 blocks of university land that envelops beautiful campus buildings, art galleries, green space and then another, I don’t know, hundred blocks of misery before finally wrapping up in utter suburban affluence as you leave the city.

It’s not an entirely unfamiliar urban form if far more dramatic in its extremes. A prosperous core surrounded by struggling neighbourhoods drawn largely along ethnic and racial lines, both then encircled by outer suburbs, some the most affluent in the region. All connected at least in theory but severely disconnected in many practical and increasingly debilitating senses.

None of it can be fixed with wishful thinking and a wave of the magical wand. One off, glitzy megaprojects like stadiums or casinos aren’t going to solve the problems. City and community building cannot happen in isolation with pockets of success springing up amid block after block after block of continued failure. A fence being only as strong as its weakest link and all that…

“Cleveland may rock,” Acaphlegmic said from the back seat as we crossed back into Ontario, “but only in certain well-defined areas.”

Until that changes, dreams of a prosperous return are going to remain largely unfulfilled.