Let’s get this straight right off the bat. 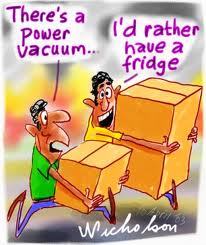 Toronto’s city council is not out of control. It has merely stepped into the leadership vacuum created by Mayor Rob Ford’s misguided, hell bent pursuit of his self-proclaimed ‘mandate’. A mandate now in tatters due to ill-advised blunders like the Port Lands land grab, declaring Transit City dead with no viable plan to replace it and an overarching war on revenue that has put an unnecessary strain on already stressed city coffers.

While the mayor loves to play victim in this, beset on all sides by deranged left wingers (new members of the club now include councillors Michelle Berardinetti and David Shiner… Michelle Berardinetti and David Shiner, people), his monochromatic, black-and-white, us-versus-them worldview has been the actual impetus for his startling loss of control at council. There is no obvious official mechanism in place to strip power from a mayor. A mayor squanders the office’s powers purely through a failure of leadership.

“With limited executive authority,” the Globe and Mail editorialized yesterday, “a Toronto mayor’s power is mostly derived from his or her ability to unite councillors in common cause, or at least broker compromise.” The paper goes on to suggest that, “Rather than embracing his current role as an opposition politician, Mr. Ford needs to find a way to lead again.”

The problem is, the mayor has never led in the sense the Globe would like to see. Uniting or brokering compromise is not exactly his strong suit.

What Mayor Ford is truly skilled at is dovetailing his angry sense of privileged entitlement with the anger of those who have truly been left on the outside. Tea Party like demagoguery exploiting grassroots populism in order to divide and conquer.

So every significant loss at council such as the most recent surreal tale of Toronto’s move to ban the use of plastic bags isn’t seen for what it most certainly is. The unintended consequence that results from not having any plan in place past point A. No. Instead it’s portrayed as a petulant fuck you to Mayor Ford by those who remain vigilantly bitter about his successful 2010 campaign. And dissing the mayor is dissing all of Ford Nation.

Was city council’s vote to ban plastic bags unexpected and impetuous? Yes. But it followed its own logic. Everyone agreed that the 5¢ cent fee council imposed – more like, suggested, since it was a bylaw never enforced – had done what it was intended to do. Reduce the use of plastic bags and their presence in our landfills. If that was the goal, why not pursue it to the obvious conclusion? So first Councillor Anthony Perruzza and then Councillor David Shiner pushed for an outright ban.

Toronto will hardly be on the vanguard on this issue if it is in fact enacted in the new year. There has been an international move in this direction for some time now. Countries in Europe have banned them. Peruse this list to see the extent of it in the United States.

Hell, deep in the heart of Alberta oil country, the city of Fort McMurray has had a plastic bag ban since 2010.

(Daniel Dale of the Toronto Star gives a thorough breakdown of the implications of the city’s proposed ban here.)

City council merely stepped into the void created by Mayor Ford whose agenda now consists of nothing more than building a re-election platform for a campaign that doesn’t begin for another 18 months or so. The only chaos or anarchy currently swirling around at City Hall is in the mayor’s office. Mayor Ford has left the actual role of governing up to his 44 councillor colleagues. They should be commended not condemned for accepting that responsibility.